Keeping our Heroes warm, even in hospital.

Post Views: 2
The two wards in the ANZAC Hospital in Iraq are called the Bullwinkle Ward and the Jacinda Baker Ward.  I think that is a wonderful way to honour two very special and inspiring women.  I thought you might like to know a bit more about both of them.

Vivian Bullwinkel was born on 18 December 1915 at Kapunda, South Australia. She trained as a nurse and midwife at Broken Hill, New South Wales, and began her nursing career in Hamilton, Victoria.  Eventually she moved to the Jessie McPherson Hospital in Melbourne in 1940.
In 1941 Vivian volunteered as a nurse with the RAAF but was rejected for having flat feet.  Instead she joined the Australian Army Nursing Service and was assigned to the 2/13th Australian General Hospital (2/13th AGH).   In September 1941 she sailed for Singapore. After a few weeks with the 2/10th AGH, Vivian rejoined the 13th AGH in Johor Baharu which is the capital of the State of Johor located in the Peninsular Malaysia.
When Japanese troops invaded Malaya in December 1941 they began to advance southwards, winning a series of victories.  In late January 1942 their advance forced the 13th AGH to evacuate to Singapore. The short-lived defence of the island ended in defeat, and, on 12 February, Vivian and 65 other nurses boarded the SS Vyner Brooke to escape the island. The ship carried many injured service personnel and the nurses of the Australian Army Nursing Service, as well as civilian men, women and children.
Two days later, the ship was sunk by Japanese aircraft. Vivian, 21 other nurses and a large group of men, women, and children made it ashore at Radji Beach on Banka Island which lies east of Sumatra. They were joined the next day by about 100 British soldiers. The group elected to surrender to the Japanese, and while the civilian women and children left in search of someone to whom they might surrender, the nurses, soldiers, and wounded waited.

The ship was bombed by Japanese aircraft and sank. Two nurses were killed in the bombing; the rest were scattered among the rescue boats to watch up on different parts of Bangka Island. About 100 survivors reunited near Radjik Beach at bangka Island, in the Dutch East indies (now Indonesia), including 22 of the original 65 nurses. Once it was discovered that the island was held by the Japanese, an officer of the Vyner Brooke went to surrender the group to the authorities in Muntok.  A small group of civilian women and children followed him. The nurses stayed to care for the wounded. They set up a shelter with a large Red Cross sign on it.
At mid-morning the ship’s officer returned with about 20 Japanese soldiers. They ordered all the wounded men capable of walking to travel around a headland. The nurses heard a quick succession of shots before the Japanese soldiers came back, sat down in front of the women and cleaned their bayonets and rifles. A Japanese officer ordered the remaining 22 nurses and one civilian woman to walk into the surf.  A machine gun was set up on the beach and when the women were waist deep, they were machine-gunned. All but Sister Lt Vivian Bullwinkel were killed.  Wounded soldiers left on stretchers were then bayoneted and killed.
Shot in the diaphragm, Vivian lay motionless in the water until the sound of troops had disappeared. She crawled into the bush and lay unconscious for several days. When she awoke, she encountered Private Patrick Kingsley, a British soldier that had been one of the wounded from the ship, and had been bayoneted by the Japanese soldiers but survived. She dressed his wounds and her own, and then 12 days later they surrendered to the Japanese. Kingsley died before reaching a POW camp.
Vivian was reunited with survivors of the Vyner Brooke. She told them of the massacre, but none spoke of it again until after the war lest it put Bullwinkel, as witness to the massacre, in danger. Vivian spent three and half years in captivity; she was one of just 24 of the 65 nurses who had been on the Vyner Brooke to survive the war.
Vivian retired from the army in 1947 and became Director of Nursing at Melbourne’s Fairfield Hospital. She devoted herself to the nursing profession and to honouring those killed on Banka Island, raising funds for a nurses’ memorial and serving on numerous committees, including a period as a member of the Council of the Australian War Memorial, and later president of the Australian College of Nursing.
In the decades following the war, Vivian received many honours and awards, including the Florence Nightingale Medal, an MBE and the AM. She married in 1977 and returned to Banka Island in 1992 to unveil a shrine to the nurses who had not survived the war. Vivian Sister LT Vivian Bullwinkel died on 3 July 2000.
Source 1 and 2
……
MEDIC LANCE CORPORAL JACINDA BAKER

It is a lot harder to write about someone who still has family alive, friends who are serving and who died relatively recently and so young.  I hope I do her justice.

Medical Lance Corporal Jacinda Baker, Corporal Luke Tamatea, 31 and Richard Harris, 21, died helping a fellow soldier on a Sunday morning in Afghanistan when their humvee was hit by a roadside bomb in Bamiyan province.  Their vehicle was the last in the convoy taking one of their patrol members to Romero Base to see a doctor.

Jacinda had received a Chief of Army Commendation in 2011 for her professionalism and courage.   According to her friend, Christine Donk, Jacinda believed that girls could do anything.  Two of her passions were boxing and baking.

Two very inspirational women to name the wards after in the ANZAC Hospital!

Now it is up to us to honour their memories by helping to make the wards that bear their name warm and welcoming for the patients that need to spend time there.

We have already sent four quits over which have Australia themes. 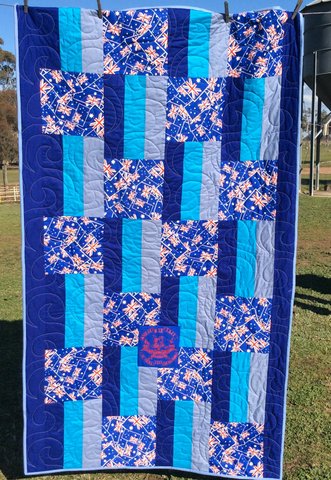 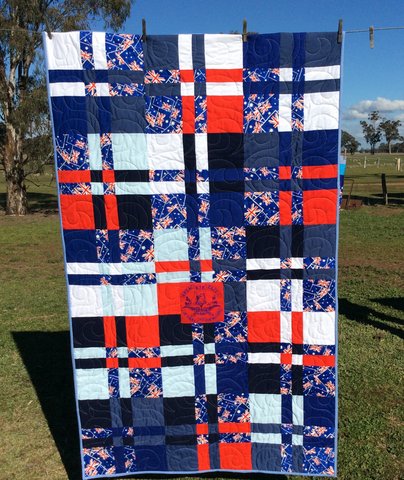 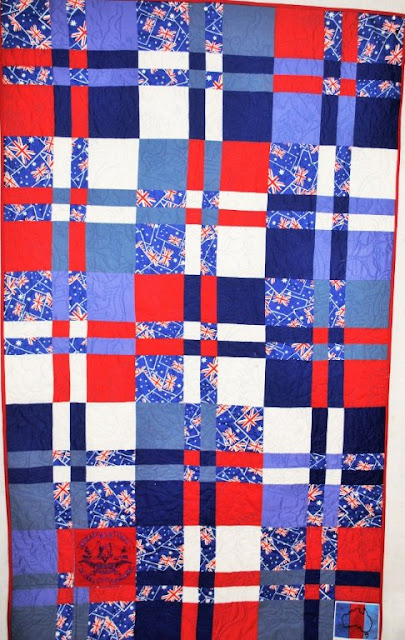 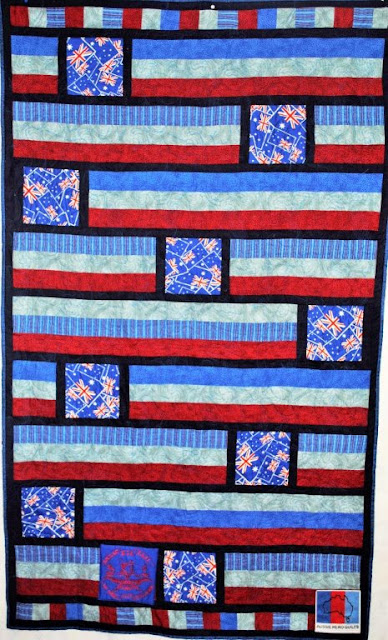 When I heard back from the nurse who is my contact over there she told me how they had put two quilts in the Bullwinkle Ward and two in the Jacinda Baker Ward.  That means that in each ward there are two beds that still have the UGLY brown horse blankets in them!

Not for our HEROES!!!

So, I bought two meters of Kiwi themed fabric and was explaining my plan to ask someone to make a quilt top from each to Stephanie T and Gail who were here helping my on Tuesday.  They both decided that they would like to make the tops themselves.
Bravo ladies.

These two quilt tops came from the North of the Yarra Quilt Group (NOTY). I am sending them up to Sandy and her team in Coffs Harbour and they will be appliqued….the final decision on what goes on the quilts will rest with the lovely ladies up there but here are some possibilities…

which means literally “be well/healthy” and is translated as an informal “hi” at the Māori Language Commission website Kōrero Māori. It is also used as a farewell and thanking someone as well.  That would be very appropriate. 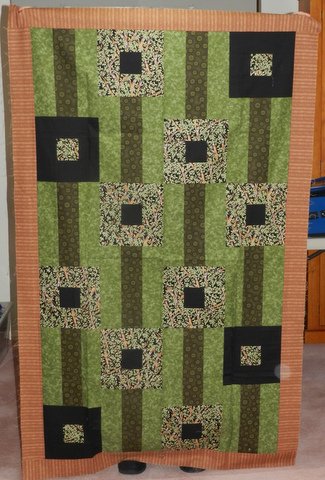 Or we could have some Kiwis 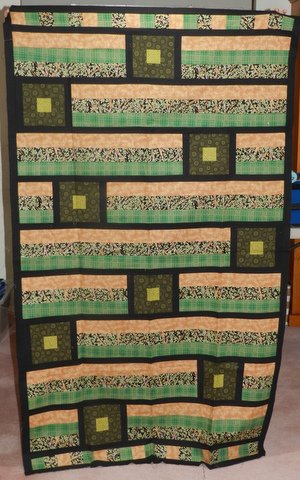 or even a silver fern.

I have no doubt that whatever Sandy and her ladies decide on will be wonderful and I know that the staff and patients in the Jacinda Baker Ward will be very grateful to be able to cover up those ugly brown blankets.

I can’t wait to show you the completed quilts and I can’t wait till I know they are in the mail….
Brown blankets indeed!

Till next time……………..keep spreading the word and happy stitching!
Jan-Maree xx