Post Views: 2
Hi All,
Well, I announced it on Facebook yesterday…..
Frank is back.
It has been a while, and we have lots of new readers so I know there will be some of you say…. “who on earth is Frank?”
How to explain Frank.
Well Frank is one of our Aussie Hero characters and you can read all about his previous exploits here, here and here….. but in short, last year members of the Aussie Heroes crew were invited to visit RAAF Base Richmond for the day and seriously, we were treated very specially all day.   Many people were responsible for pulling the day together but it was the brain child of one particular couple….  Dan and Jacqui.   Dan had received his quilt and laundry bag when he deployed previously.  At the end of the day at Richmond a group of us met at a local Windsor restaurant, and whilst there we presented a special laundry bag to Jacqui as a thank you for her efforts in pulling the day together…..  The bag was made by Stephanie T and little did we know that the bag, Frank, would assume a life of his own……
Here is the latest installment….
Hello Nanna Stephanie!
Wow time flies fast, so much yet so little has happened since we saw each other,  at JM’s Christmas dinner in 2014. And recently I realised it has been that long since I last wrote to you, my deepest and sincerest apologies.
Well, since then, Frank has traveled with us across the country and has even decided to take on baby sitting duties – supervised of course. But lets start at the beginning:-
Once upon a time, long ago – not quite a year – in a land far far away (actually a half hour drive from here)…there was a mischievous Laundry Bag causing mayhem and havoc at a Christmas dinner in the HQ of Aussie Hero Quilts.
It is here where the adventure starts with our Hero Frank entering the HQ surrounded by a group of random individuals, with varying backgrounds and yet all have one thing in common…they were invited to the HQ by Jan-Maree.
Of course there were more things in common, which was discovered as the evening progressed. Most knew of Frank, yet he still wanted to wear ‘the tag’ with his name on it (we all had to wear name tags which were colour coded one colour for recipients and the other for quilters/lb makers) and within the first half hour he felt right at home. He started to look around the HQ, and discovered the dedicated wall covered in memorabilia from all over the place – 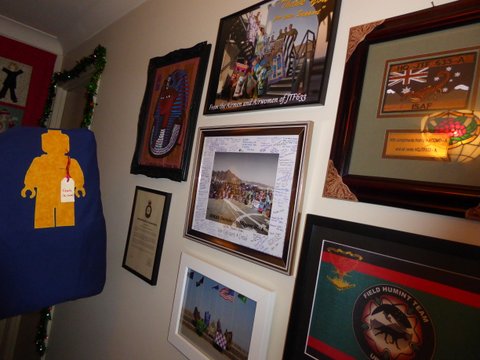 He stared at the wall for a while, soaking it all in. I thought it might be safe to walk away and give him time to ponder.
Big mistake.
We lost Frank.
Dan and I went hunting, and I think you were helping us for a little bit too, Nanna Stephanie. Remember we found him in JM’s office?   She had left her computer unlocked and he was about to post on her Facebook page…but we stopped him just in time. 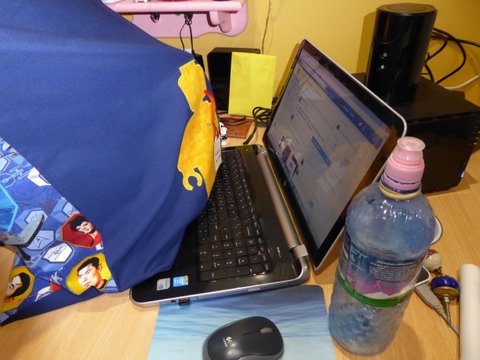 Being as thin as he is, he is pretty slippery. He decided that hide and seek was a great new game, and I fell for it. Every time I would find him he would slip away again. We found him about to go through the ladies’ handbags; 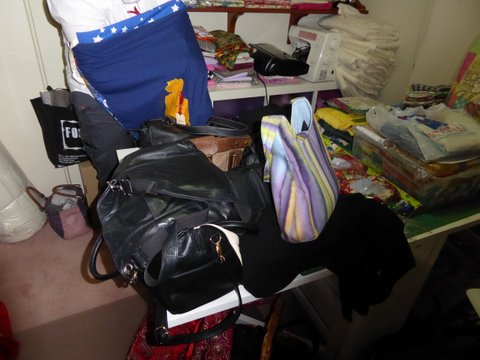 hiding in JM’s bedroom having a quick nap (it took me a while to locate him that time) ; 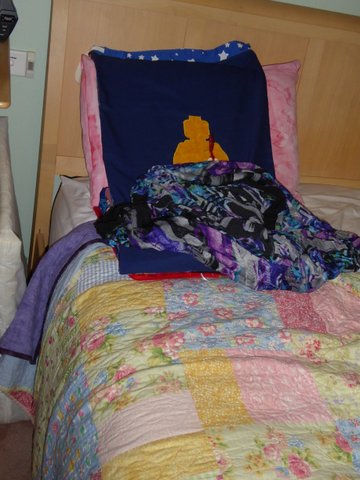 trying to hide amongst the quilts; 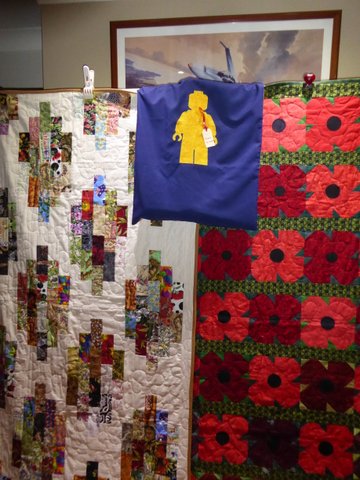 and we even found him in a Christmas stocking! 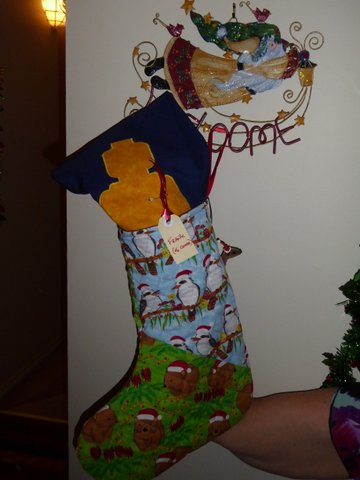 After a little while the food came out (what a feast – thanks all!), and Frank reappeared – I did not know that LBs liked salami and reindeer looking desserts. 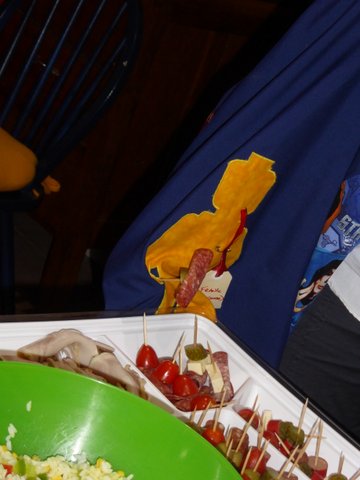 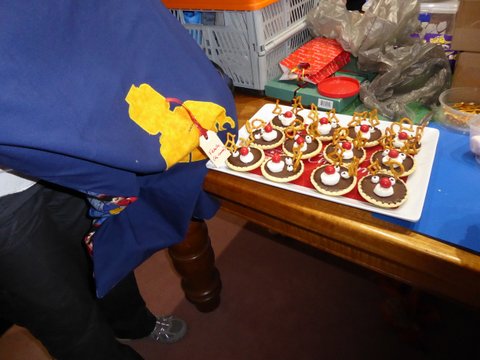 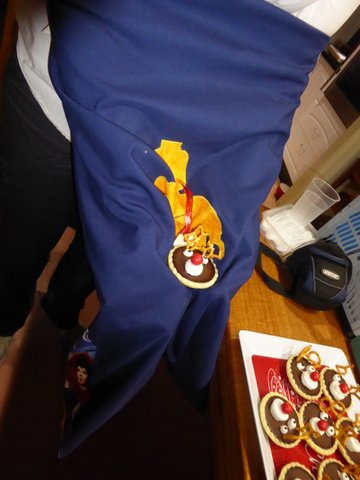 (I knew he liked Krispy Kremes, because Dan and I caught him just as he was about to hook in to a box we had bought – which didn’t quite make it to the party…). 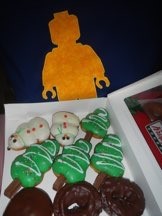 Once his belly was full he started having a little adventure again,  he attempted to ‘acquire’ a coin from the special display cabinet JM has. Luckily we caught him just as he was opening the cabinet. It was then that we decided to monitor him a little closer, and kept him with us. 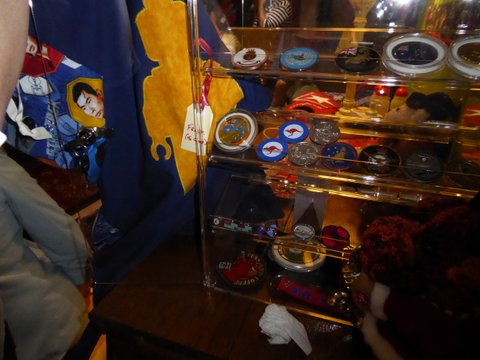 It was then that he insisted on a photo with the two of us (and I can’t remember what joke was told but it looks like we all thought it was hilarious!). 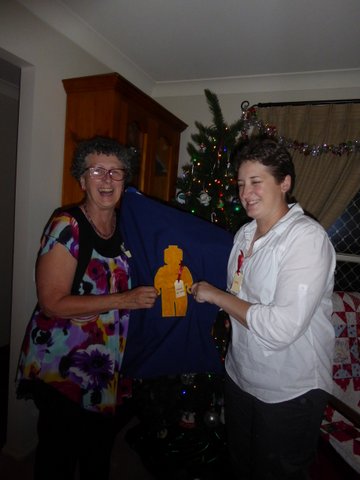 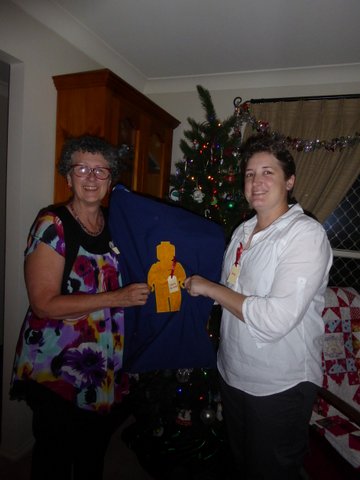 Being a Laundry BAG, Frank is able  to conceal…er I mean carry items inside him. And at first I thought he had ‘souveniered’ something from AHQ HQ, and I was worried how to explain to JM that I can’t control my LB.
But it was the Christmas present you had given, he was so bashful (who would’ve thought?) and asked me politely to help him open it on Christmas day. He wanted the card read out to him first (he can’t read yet – but is working on it) and then he slowly opened the parcel with assistance from me. 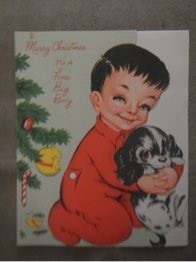 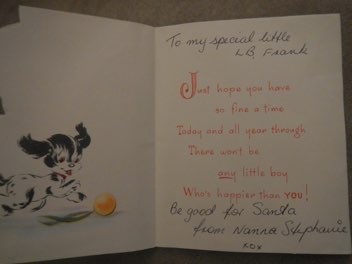 So inside we found lollies, a nanobloks set (so he can build LB sized lego) 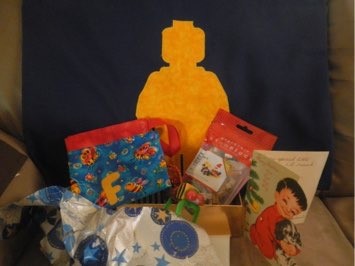 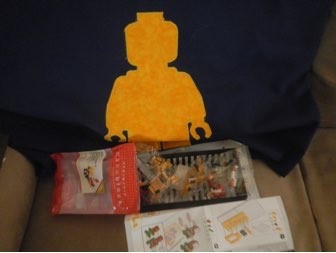 and his very own Laundry Bag! He was so chuffed. 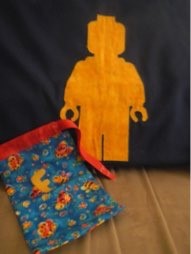 He carries his LB inside himself at all times, and his little Santa is with our Christmas decorations – so it will come out at Christmas time and take pride of place amongst all other special Christmas items we have. 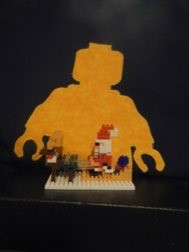 So that was last year, just before our big car trip to the west. 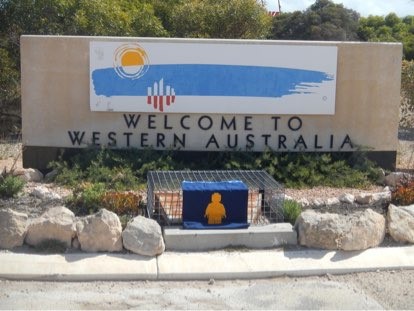 Which is an adventure in itself. Frank is writing an eBook, which he wants to release in due course. He was going to release it this year, but is now waiting until 2016 – as he will be going to Europe with us in July and wants to add that into his book. No doubt that he will want me to send you a copy once its finished.
When I came back from deployment (just in time for the AHQ Christmas do), I promised Frank we would travel a bit, but I fell pregnant and was not able to travel at all this year. He went into hibernation and is now fully recharged and full of energy. We have been using him to keep our daughter entertained, and I think their friendship is off to a solid start. 🙂 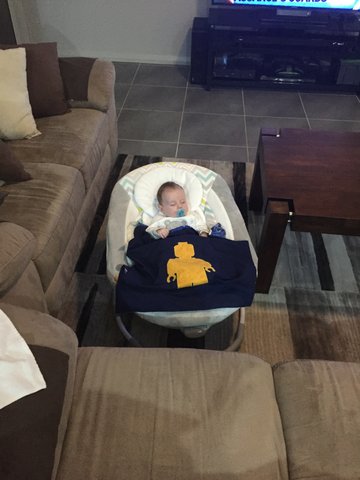 No doubt I will have more to write soon, and I promise it won’t be so long between letters.
Looking forward to seeing you on Saturday for the next AHQ xmas do!
Talk soon,
Jacqui
…..
Till next time……………………..keep spreading the word and happy stitching!
Jan-Maree  xx