On 23 January 2020 Coulson Aviation, a Canadian-US aerial firefighting company, lost three of its members when they were killed when their C130 Large Air Tanker crashed north-east of Cooma.
Killed were
Captain Ian McBeth,
First Officer Paul Hudson and
Flight Engineer Rick DeMorgan Jnr.
The Rural Fire Service (RFS) was leasing the aircraft from the North American company to help fight the bushfires. 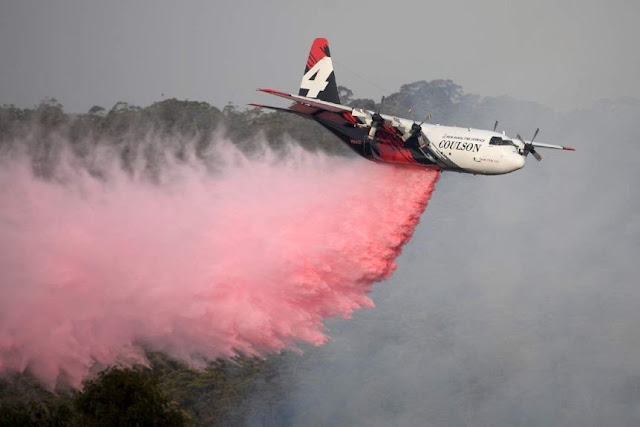 (AAP Image: Dan Himbrechts)
Last Saturday, in the company of my husband David, and RAAF Chaplain Troy White, I represented not only Aussie Heroes, but also the broader Australian community, when I presented quilts to the families of the three Coulson Aviation firefighting aircrew in the presence of the United States Ambassador, the United States Consul General, embassy and consulate staff.
I am actually struggling to find the words to describe how special the afternoon was.  After being invited into the room and given the floor, I briefly explained what Aussie Heroes is, and then explained that we wanted to present each family with a quilt made by our volunteers, but given from the wider Australian public.
Each family sent one member forward to accept their quilt.  To end the presentation I produced a packet of my homemade ANZACs for each family group. I explained that as they are guests in my country I hoped these ANZACs  would make their stay a little more comfortable, especially if jetlag took hold, or if they got the munchies in the middle of the night.  It turned out to be a good gesture to lighten the mood after the presentation of the quilts.
After the formalities were over, various members from each of the families came up to say thank you individually, including wives, sisters, daughters and friends of the deceased. It was very special.
A little later members from each family again sought me out to chat about the quilts, their experiences since their loved ones died, and their time in Australia and at home. There were plenty of hugs and tears, but as I expected it wasn’t a sad occasion.  There was warmth, gratitude, respect and connection. The mother of one of the men told me that she told his sister that she was the take the quilt and wrap it around her shoulders like a hug from her brother.
I am glad I had the opportunity to speak to family members personally. I explained how living in America at the time of 911 had helped to shape my decision to start Aussie Heroes. I also explained that I had met Aussie soldiers who had been sent to hospital in Germany after a helicopter crash in Afghanistan.  Those soldiers had told me that they had been given quilts by an American organisation and that had also been part of the reason I started Aussie Heroes.  I told them it was nice to be able to return the favour.
I had  a good chat with the Ambassador, and his grin was genuine when I handed him his packet of ANZAC Biscuits. 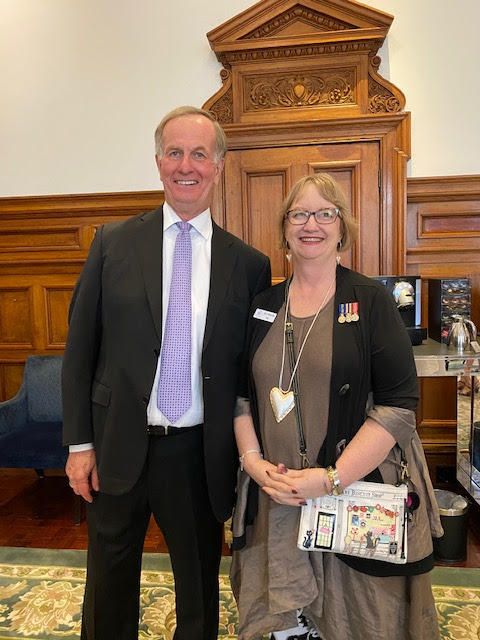 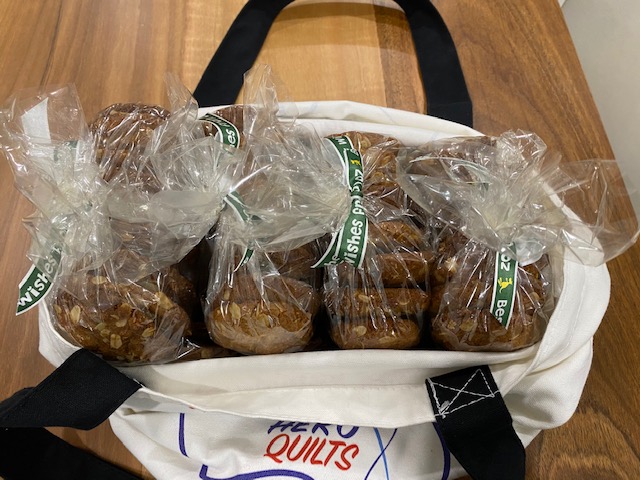 ANZAC Biscuits tied up with “Best Wishes from Australia” ribbons.
Each quilt had a personalised label. 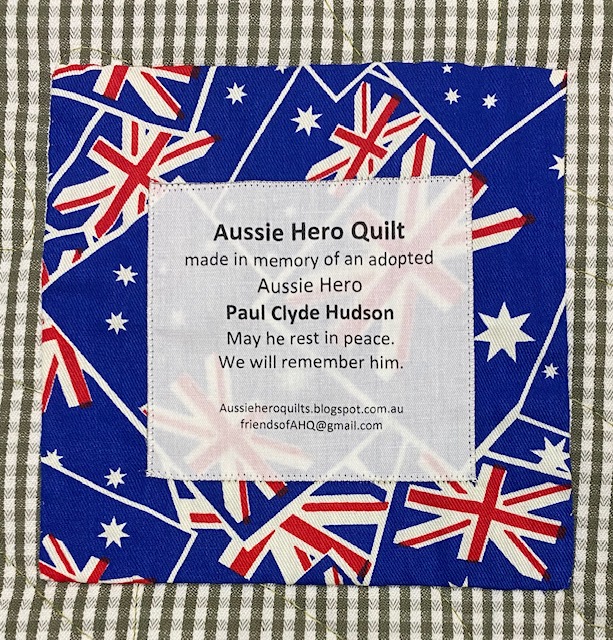 Toni, Kristie and Clarissa made special presentation bags for the quilts.. 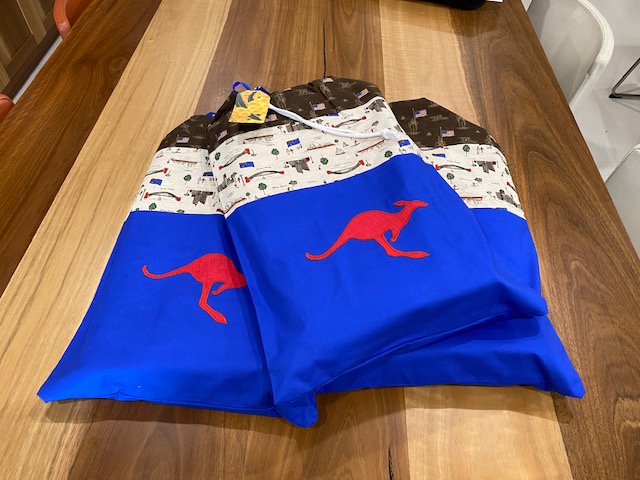 and I was determined to make sure the right family received the right quilt so I made personalised labels for each bag. 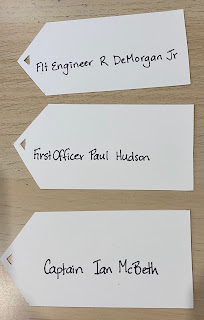 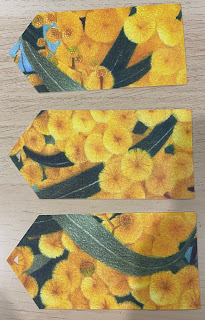 The quilt had been designed and put together by Tom and Kath Maginnity using Blocks of the Month (thank you BOM Squad) and beautiful embroideries by Kay W. 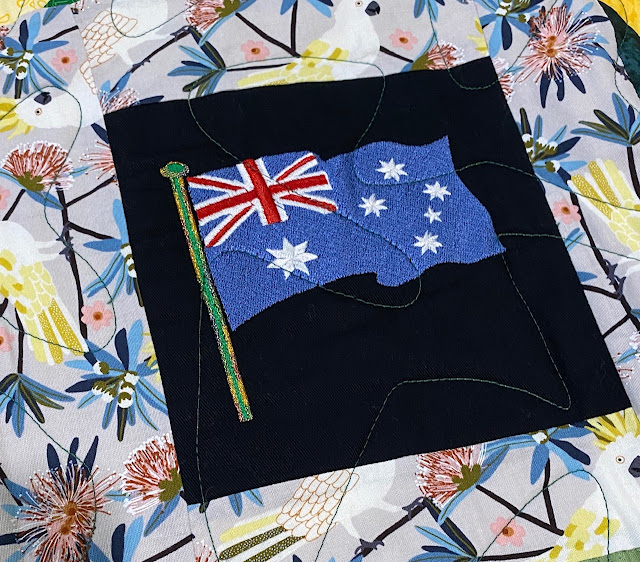 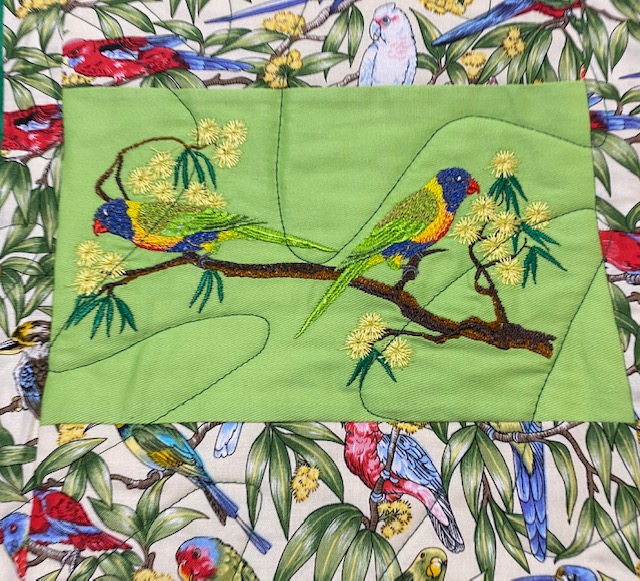 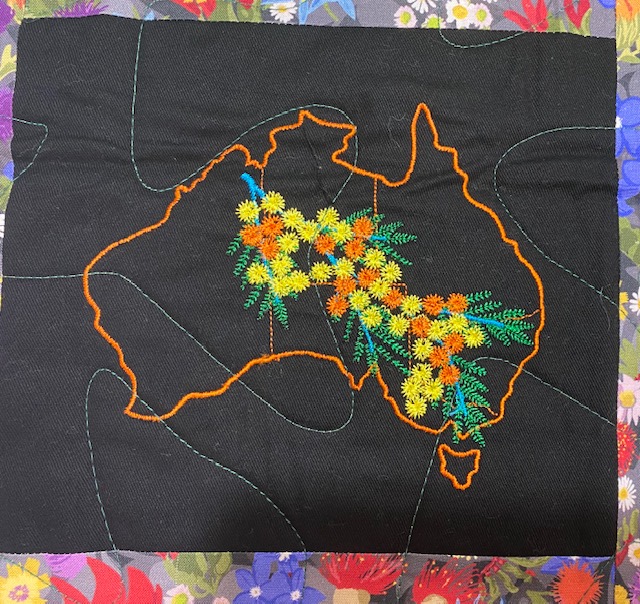 One of the families commented on enjoying seeing the beautiful birds that they had seen in the wild on their quilt. 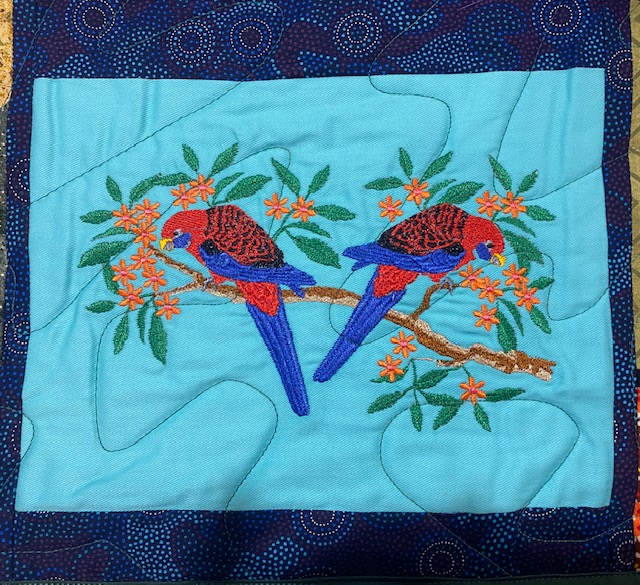 Another family member told me that three koalas had been named after Ian, Paul and Rick Jr 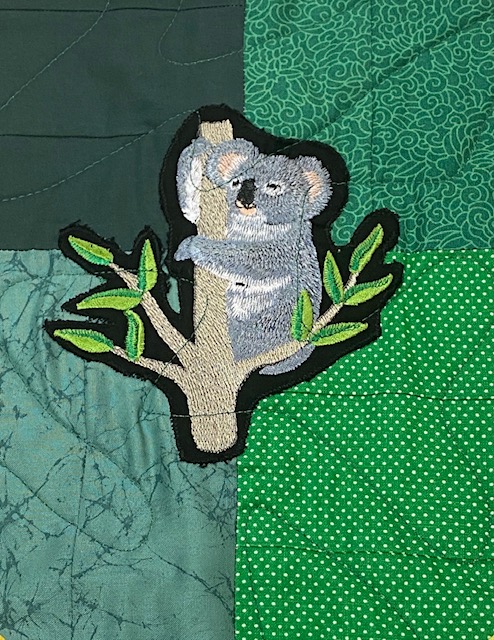 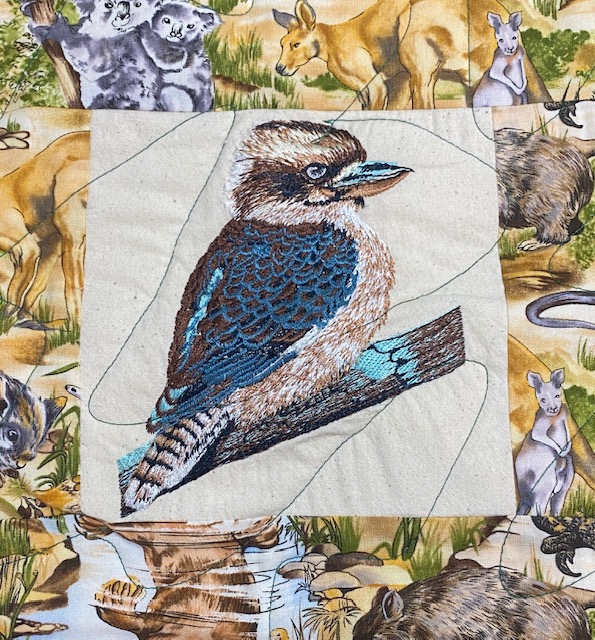 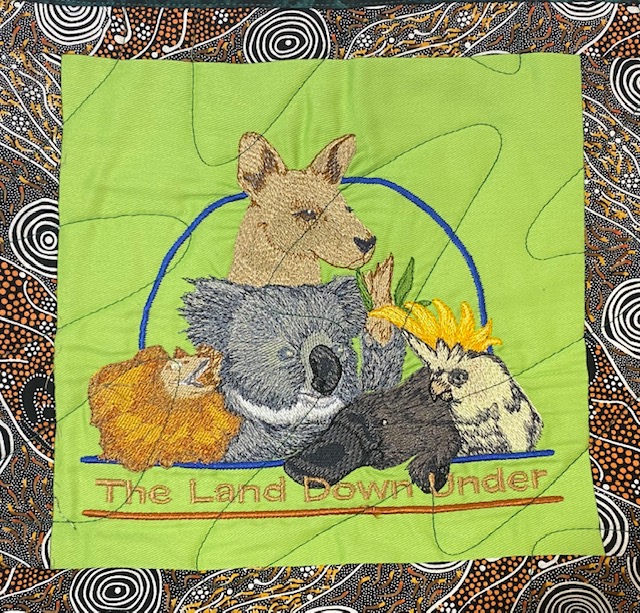 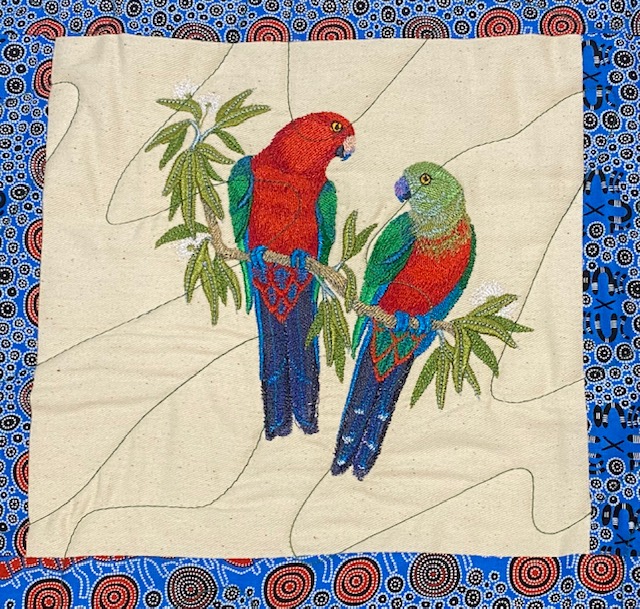 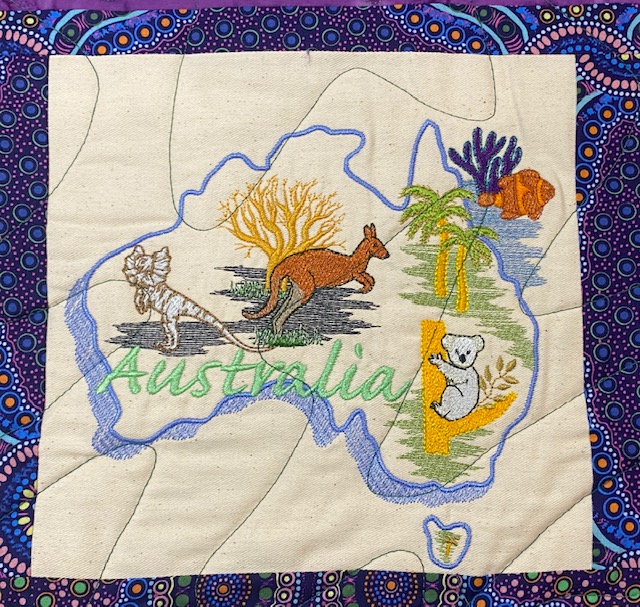 The quilts were quilted and completed by Philomena. She just managed to squeeze them in before going on holidays. 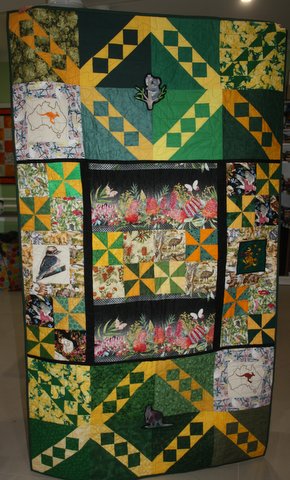 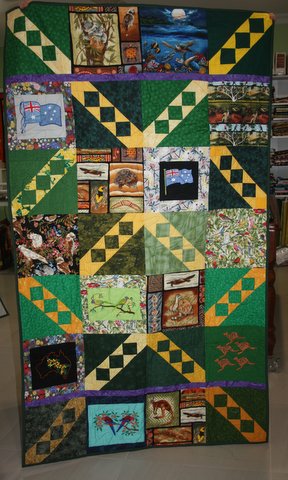 I felt so privileged to be the one to present these quilts on behalf of not just Aussie Heroes, but also on behalf of a very grateful country.
There are not many days that I am not consciously grateful that I am privileged to run Aussie Heroes.  It is the most wonderful family of volunteers and recipients and has become a community in itself.
This particular day would have to be one of the most special in eight years of amazing memories and experiences, so far.
Till next time….. keep stitching!
Jan-Maree xx