Post Views: 6
Tonight I want to introduce you to these five young legends in the making….
Braeden N, Braeden E, Jake, Brandon and Danika
Five fabulous young people with big futures ahead of them if they keep going the way they are going. 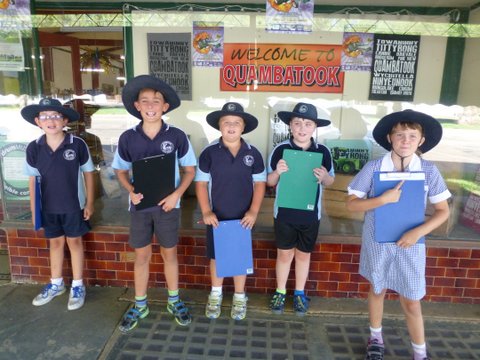 Apologies, I know which one Danika is but not sure if I got the rest of the names in the same order as the photo.
Some of you will remember our wonderful Post Mistress of the Sinai, the lovely Chelle.  I would show you a photo of her but she would kill me so instead, if you don’t know Chelle then you can see some of her work here.  Way back in 2012, our first year of operation, Chelle was deployed to the Sinai where she received one of our first quilts.   When she came home she bought a sewing machine and learned to make quilts.  Time passed and Chelle decided that she needed a change from Army life and so she took the opportunity to buy a business in her old home town of Quambatook.
Never heard of it??
Well you have been missing out!
The marvelous town of Quambatook is located on the Avoca River 302 kilometres from Melbourne.  According to Wikipedia in 2011 Quambatook had a population of 361.
Nestled in this wonderful little town is the Quambatook Group School.
This is where we will find Danika, Braeden N, Braeden E, Jake and Brandon.
The School’s Website says

“Quambatook Group School is a small rural school in a grain growing area of the Mallee in Northern Victoria………The students have a well-developed work ethic and high personal expectations of behaviour and academic performance are shared by teachers and students.
Since 2015, the students have been engaged in Challenge Based Learning or CBL. It is a very exciting program in which teachers and students work together to learn about compelling issues, suggest solutions to real problems, and take action. It’s a way of making learning engaging, purposeful and real encompassing all areas of the curriculum. Over the last 2 years the students have organised a community concert with live music, sent care packages to soldiers overseas, shopped and prepared healthy lunches for their parents, raised funds for endangered animals and created an iMovie with community members showcasing various gadgets and gizmos.
Quambatook Group School is held in high regard in the community and there is significant positive interaction between the school and groups in the community.”
Well now this little school, and indeed, the community of Quambatook is held in high regard by all at Aussie Heroes.
This little school of FIVE, yes FIVE students is well and truly punching above their weight. What till you see what  Brandon, Danika, Braeden N, Braeden E and Jake have achieved recently.
As it says above they organised a community concert to raise enough money to pack ten care packages for our the troops.
Ok so that sounds pretty awesome but wait till you hear more. 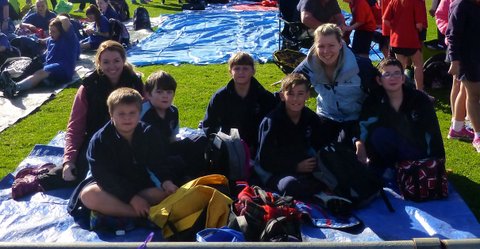 On Friday 15th April, Quambatook Group School show-cased its 21st century learning by holding a Community night organised by the students. The night was out-standing from the start to the end! The school was lit with hanging lights and 100 community members eagerly joined each other in a BBQ dinner of kebabs, salads, sausages and pumpkin soup. Slices and tea and coffee were also served by the parents. Students were in charge of collecting money and selling raffle tickets. Performers were then introduced by the students and the community enjoyed the musical talents Quambatook has to offer. The night concluded with 2 community songs . 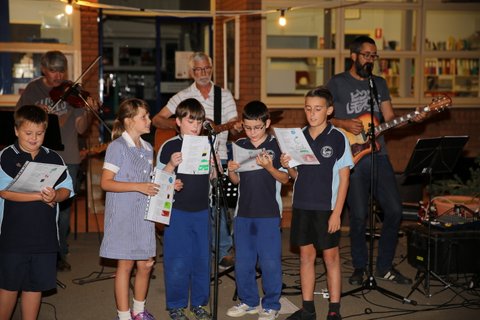 Thanks to the generosity of the community QGS raised nearly $900!!!  Jake, Brandon, Danika, Braeden N and Braeden E were delighted with their efforts and are now looking forward to producing 2 Soldier Care packages each.
They are currently purchasing items, constructing boxes and writing letters during their learning time.
Chelle has told me some of the goodies that are going into their boxes and let me tell you, there are going to be some might happy troops on the receiving end.
They had the money that they needed and some left over which they have decided to donate to Aussie Heroes!
This week I received a cheque for $300.  Wow awesome effort Quambatook Group School.
Don’t you just love the spirit in small town communities!!!
Well done Braeden E, Jake, Brandon, Danika and Braeden N and well done to the staff of the Quambatook Group School and the parents and community.
And a huge big thank you from all at Aussie Heroes….
PS. Please give the Post Mistress a big hello from us when you see her as we think she is pretty special too!
Till next time…………..keep spreading the word and happy stitching!
Jan-Maree  xx