Taking one for the team: my HMAS Canberra adventure – by Gail Mac

Post Views: 3
It started with a phone call from Jan-Maree. “How adventurous are you feeling?” she asked.
She then explained that AHQ had been invited to send one quilter to participate in a Family and Friends cruise from Brisbane to Sydney aboard HMAS Canberra, and asked if I would like to be that lucky person. After half a moment’s hesitation, I accepted.
There were forms to fill in and a plane ticket to book.
I was met at Brisbane Airport by my host, the inimitable Chief Petty Officer Cath Harvey, whom I have come to know and love over the last two years, who whisked me off to Portside Wharf where the ship was berthed. After putting my bag in Cath’s cabin, we went ashore for a late lunch followed by dessert (chocolate fondue and hot chocolate) before going back on board, where Cath gave me a personal tour of the ship. We then joined some others for drinks ashore, before going back on board for a guests’ briefing at 1900 (7 p.m.). I could see this was going to be a tough assignment! 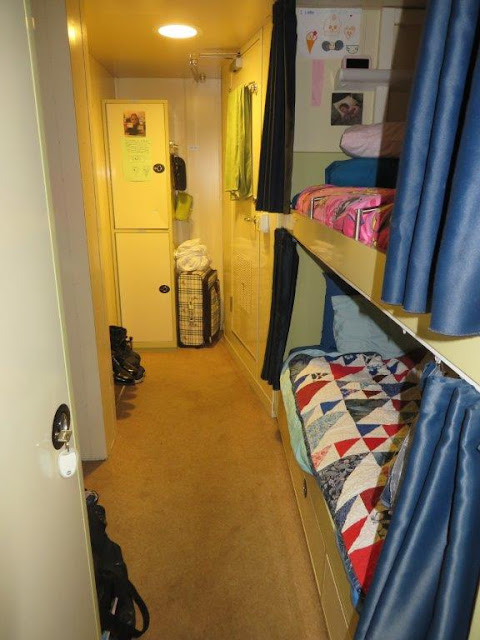 CATH’S CABIN
For those not in the know, HMAS Canberra is the flagship of the Royal Australian Navy. It is an LHD (Landing Helicopter Dock), also called an amphibious assault ship, over 230 metres long and 32 metres wide. The flight deck is 27.5 metres high
.
Why am I quoting these figures? Just so you can tell this is a BIG ship. To go almost anywhere on the ship I soon learnt that you need to walk along kilometres of corridors (most of which look the same) and climb up and down more steps and ladders than you can imagine.
Late on Tuesday morning the ship left Brisbane, navigating down the Brisbane River with the help of tugs and then sailing across Moreton Bay. 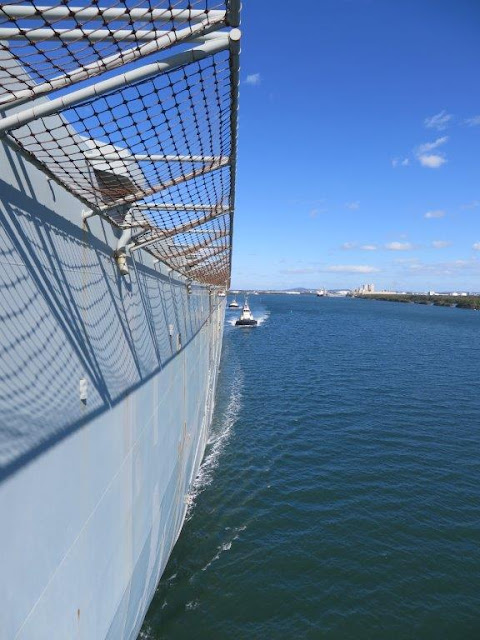 LEAVING BRISBANE
Cath organised the opportunity for me to present Captain Ashley Papp with a laundry bag featuring his favourite AFL team. 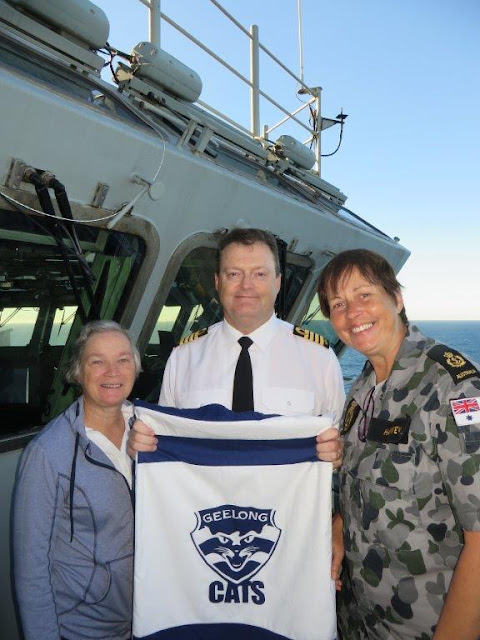 Family members and friends on board were grouped and rotated through a series of activities and demonstrations as we crossed Moreton Bay. There were demonstrations of the Typhoon weapons system, the operation of the helicopter lifts, the MHR-90 helicopter, damage control (such as firefighting), small arms and how boarding parties operate. 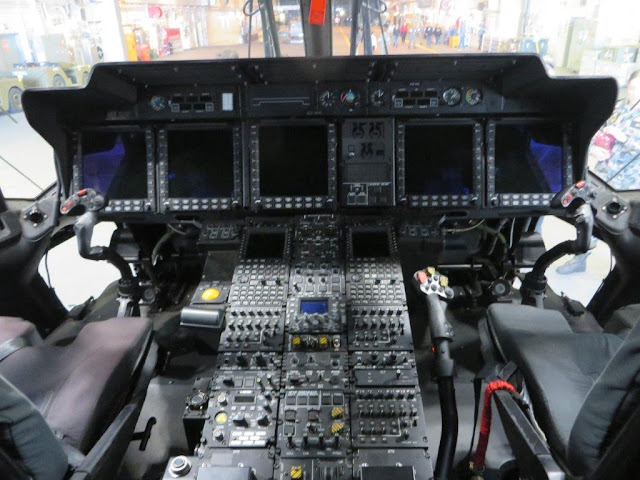 HELICOPTER COCKPIT
We also spent time on the bridge, from where we could see, in the distance, whales jumping and blowing as we turned east and then south into an increasingly choppy sea. Needless to say there were a few who didn’t feel very well that night! Those who were not seasick still staggered around like drunks as the ship rolled from side to side in the choppy conditions.
On Wednesday morning there were more group tours: the LLC (light landing craft), the marine engineering department, the medical facilities, and a talk from Cath, Chief Petty Officer “Crystal” Clear, and Petty Officer Clint Simpson (all from Maritime Logistics section) about living at sea – including catering for the ship’s company and any embarked forces (a total of about 1300 people were on board during their recent joint exercises with the army). A tour of the kitchens and food storage facilities was included:  huge freezers, cool rooms and dry storage areas. 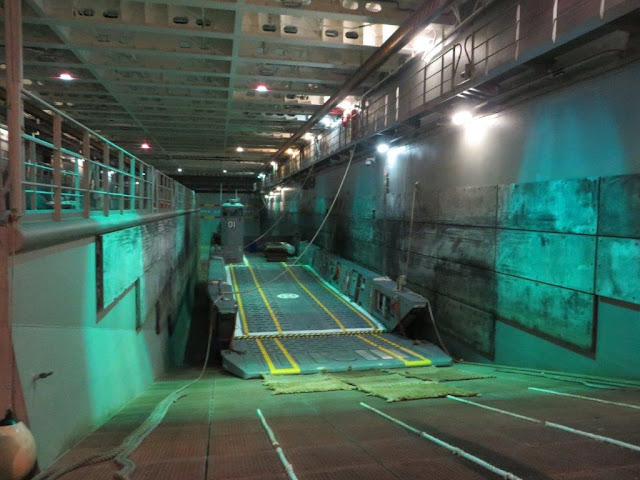 LIGHT LANDING CRAFT IN DOCK
After lunch we were treated to a helicopter show on the very windy flight deck. The helicopter team demonstrated take-off and landing procedures, winching people up from the deck, and collecting and depositing cargo. 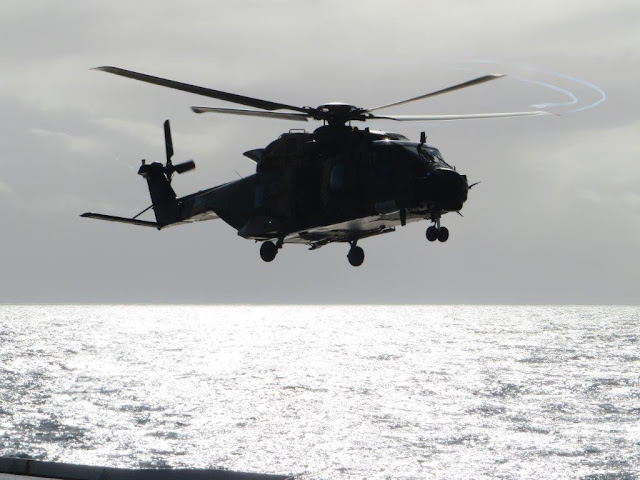 Later in the afternoon we witnessed a Clear Lower Decks, at which the whole ship’s crew, except for those who can’t be spared from their duties, are present. Awards such as Australian Defence Medals and Captain’s Commendations are presented to those who have earned them.
After dinner that night we attended a fun quiz night and enjoyed musical items from some of the very talented musicians from among the crew. Cath decided our team for the quiz should be called Aussie Hero Quilts(of course) and thanks to the combined knowledge of the assorted team members, our team won the night. The topics for the 5 rounds of questions were something like Defence, Star Trek, Family, Computer Games and State of Origin (Rugby League).
Next morning we were up early to attend a ceremony involving the Committal of Ashes to the Sea – four ex-Defence members had requested their ashes be scattered at sea. Senior Chaplain Stuart conducted the service, which was very moving.
At breakfast, the excitement was building as we approached Sydney Heads. Crew members with guests on board were allowed to take their guests onto the flight deck for the passage through the Heads and down the harbour to Garden Island. It was a beautiful morning and Sydney was sparkling. Cath was particularly excited, as crew members not involved in the actual docking of the ship at the wharf are not usually allowed on deck during this time. 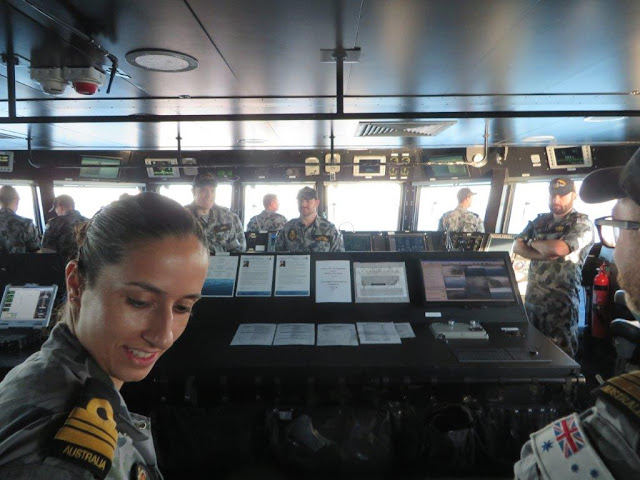 PORT ENTRY BRIEFING ON THE BRIDGE 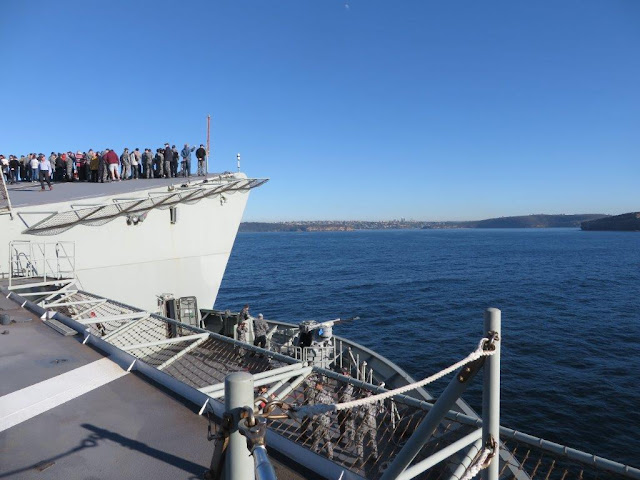 APPROACHING SYDNEY
All too soon we were tied up at Garden Island. The gangway was secured and it was time for farewells. Cath, as my host, escorted me off the ship and off the base. It was time to go home.
Many thanks to Captain Ashley Papp for having me on board, to Cath Harvey and her colleagues from the Senior Sailors Mess who were happy to answer my many questions, to the other family members who looked after me when Cath had to work, and to the entire crew for their friendliness and courtesy throughout the voyage. Thanks also to Jan-Maree for giving me the chance to go. It was an experience I will never forget. 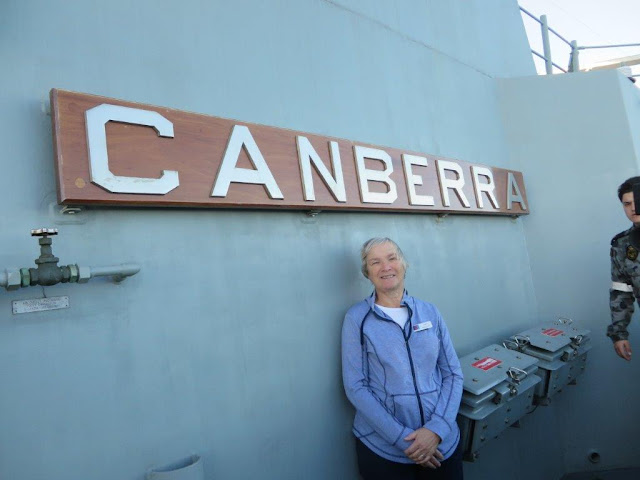 Till next time… keep spreading the word and happy stitching!
Gail Mac