Post Views: 2
Some of those who have been around Aussie Heroes a while might remember the story of Merida and her quilt.  If you want to read the whole story you can check it out here.   Merida is not her real name but it made it easier to tell the story so I gave her a ficticious name… I named her after the lead character in the movie “Brave” and if you knew her you would understand why.   The similarities are quite significant.
Anyway, Merida was one of my contacts in Kandahar in 2012/2013.  She was a defence civilian and she grew up about five minutes from where I live.  Her parents and grandmother still live there.   I wanted some input into her quilt and so contacted her mother to ask for her advice and we went from there.  She came and helped Caroline and I choose the fabrics and to cut a very long and fun story short, the three of us put Merida’s quilt together….. read the story… its a good one…
Anyway, when the time came for Merida to return home to Australia she arrived home just in time to celebrate her 30th birthday. Caroline, my husband and I were invited to the party.
Approximately a year later on New Year’s Day 2015 we were again invited to celebrate Merida’s engagement to the man of her dreams, who she met whilst deployed in Afghanistan.
Last night I attended their wedding.  Caroline could not make it as she had another commitment but she would have loved to have been there.  Because I know a number of you will remember the story I asked Merida if I could share a photo and she gave me her blessing. 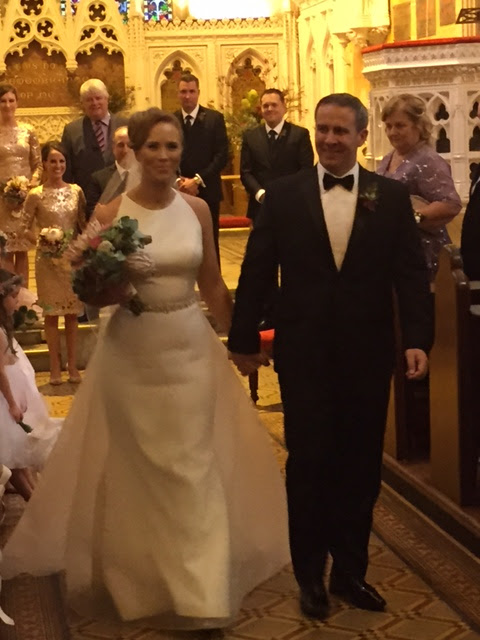