Hi all, tonight I am cheating a little bit as most of what is written has been taken directly from Lucy Carroll’s website, but as these are her quilts noone else could describe them quite as well as she has herself.  These quilts are amazing.  You really need to see them in the flesh so to speak.  Lucy is a contemporary Australian textile artist. She has won multiple awards in Australia and overseas for her work.  As well as that, Lucy is a service wife and an ex-serving member herself (she was actually an Air Traffic Controller like me!  so no bias on my part!)

I am hoping that many of you will be able to head along to the Stitches and Quilt shows around Australia and see these quilts in person and hopefully this post will encourage you.

On the 25th of April, 1915, the first members of the Australian Imperial Force (AIF) landed at Gallipoli Cove, along with troop from New Zealand, Britain and France.

Trooper
Although the campaign was eventually unsuccessful, the ANZAC (Australian and New Zealand Army Corps) troops fought bravely and their mateship and sacrifice inspired the emergence of a unique national identity.
The Anzac Quilt honours the sacrifice of our soldiers on the Centenary of the Anzac landings at Gallipoli Cove. It tells the story of one mans’ journey, from his enlistment and embarkation, through his own personal ‘baptism of fire’, and his eventual journey home.
Around 420,000 Australians enlisted during World War One, which was just under 40% of the male population between 18 and 44.
Throughout World War One, it became common practice for men to have a formal portrait taken in a studio before their departure. They were very important items, they symbolised the young mans’ transformation from civilian to soldier, and were most often left behind as a treasured reminder for much loved wives and mothers. 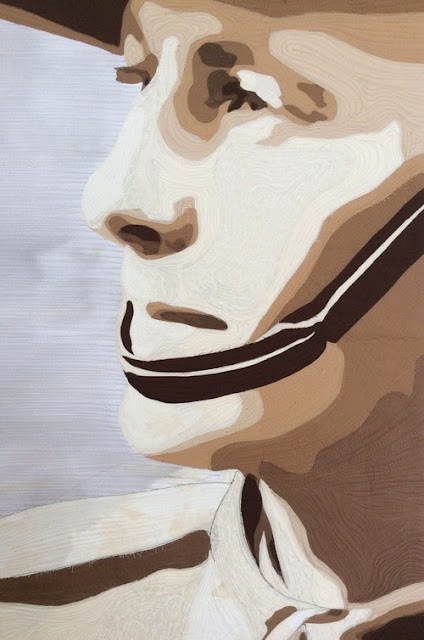 Dockside
Of the 420,000 soldiers who fought in WWI, around 50,000 were sent to Gallipoli. Although the legal age for enlistment was 18, many younger boys enlisted, and the youngest known soldier was just 14.
As the troop ships waited to depart, paper streamers were thrown to connect the troops to their loved ones below. The streamers were the last physical link between couples, and many kept their torn half as a reminder and a symbol of that final contact. 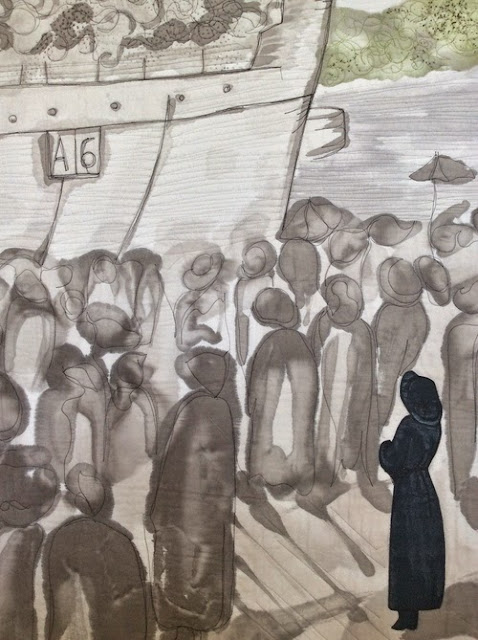 Cove
The first troops landed at Anzac Cove in the early hours of 25 April 1915. By nightfall, around 16,000 soldiers were on the beach or in the hills surrounding the landing site. Piers and tents were quickly erected, and most of the soldiers were sent straight inland to fight on the ridges and in the valleys surrounding the cove.
The troops landed well north of their intended landing site, instead of gentle slopes and an open beach they faced steep cliffs and ridges. 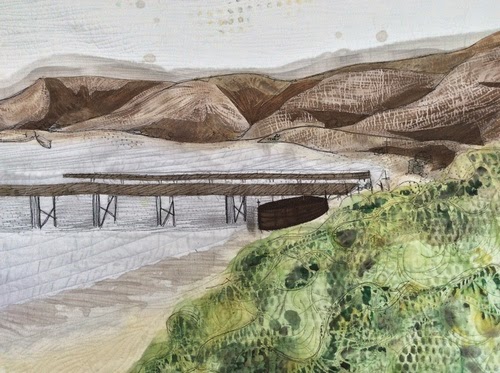 Arrival
Row boats took the men from the transport ships to the beach, from there they would have to make their way through the water to the land. Royal Navy battleships provided covering fire, but they were unable to supress “Beachy Bill”, a concealed Turkish battery at Gaba Tepe. Despite the shelling and sniper fire, the soldiers continued to swim at Anzac Cove throughout the campaign, as the one source of relief from the incessant bugs, mud and heat; only the fiercest shelling would stop them. 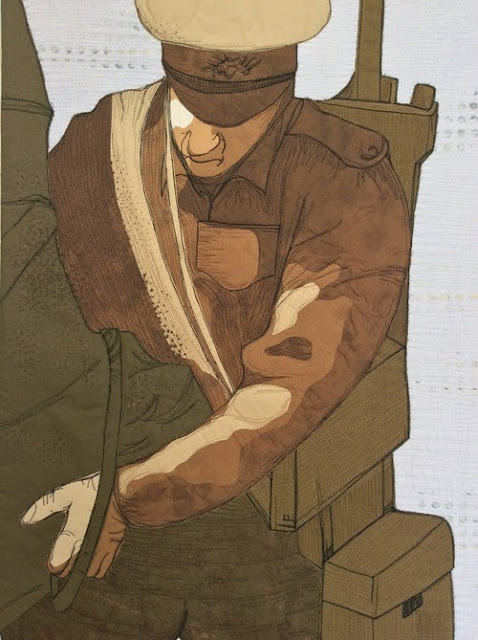 Uphill
The troops became mixed up when landing in the dark, and by the time the sun came up the plans had been largely discarded, with freshly arrived troops sent into battle to fill holes as soon as they arrived.
Men would scramble uphill, grabbing onto bushes and branches or using their bayonets to drag themselves ever upward. Once they reached their destination on the ridges, the survivors on both sides would alternatively charge and dig in. As Turkish reinforcements arrived the Anzac position became precarious. The men held onto their shallow entrenchments throughout the first days until reinforcements arrived and more substantial trenches were created. 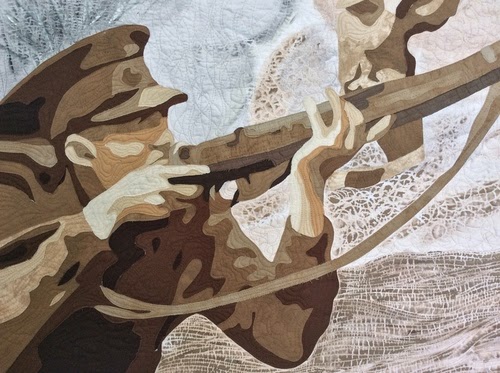 Trench
As the campaign continued, the soldiers learnt to survive on the hillsides and in the trenches. Their ingenuity and courage saw them making the best of a difficult situation – even playing AFL and cricket on the slopes.
The men continued to try to advance further inland, but each attempt failed. The August Offensive was the final attempt to break the stalemate which had persisted since 25 April, and included the battle of Lone Pine, where thousands of soldiers were lost as they took a complex series of Turkish trenches. The men raced across the short distance between their trenches and the enemy, and were dismayed when they realised the Turks had covered their trenches with logs, which had to be ripped up while the men stood exposed to machine guns and snipers.
The next day in the Battle of the Nek, 375 men fell to Turkish fire in a space the size of three tennis courts. In total, 600 men charged the Turkish trenches in 4 waves of 150, several minutes apart running with no ammunition and bayonets attached to cross the 27m between the trenches.
The first wave was cut down within a minute; two minutes later the second wave followed without question, only to be cut down not even half way across. The final two waves now knew what odds they were facing, and despite confused attempts to stop them charging many men went over anyway and were quickly cut down. Their bodies remained there until burial details arrived in 1919. 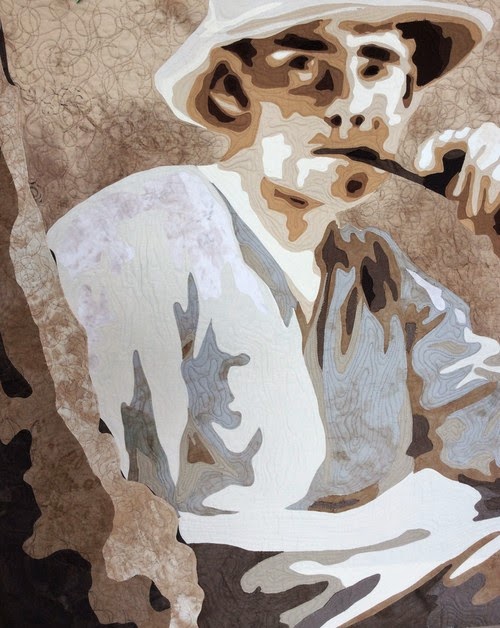 Simpson
Private John Simpson landed at Gallipoli on 25 April, and became famous for his work as a stretcher-bearer until he was killed on 19 May. His donkey, Murphy had been brought in to carry water, but instead the pair moved wounded soldiers day and night to the beach. He was killed by machine gun fire while carrying two wounded men, and was buried on the beach.
At 22 years old, he enlisted in the hope of making his way home to England, and despite his recklessness he became a symbol of courage and tenacity. 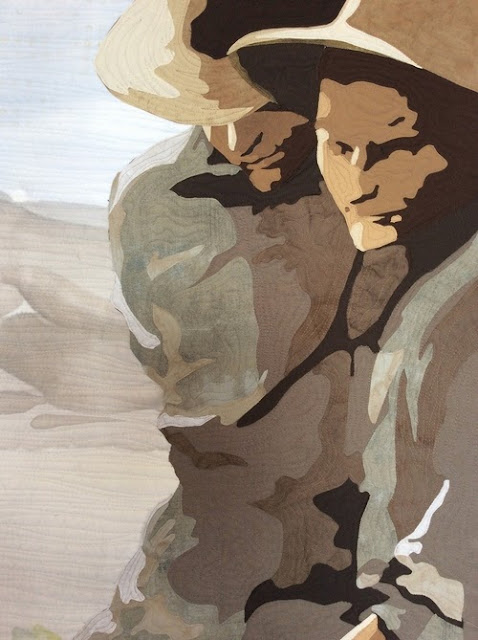 Retreat
After the failure of the August offensive, staff began to consider the need for evacuation. With winter fast approaching, they began to prepare by removing stores and troops from Gallipoli, and the withdrawal was planned to perfection. In the end, it was to be the most successful part of the entire campaign. Most of the men were evacuated via crowded boats off the pier at North Beach, and there they had their last glimpses of the Sari Bair Range. 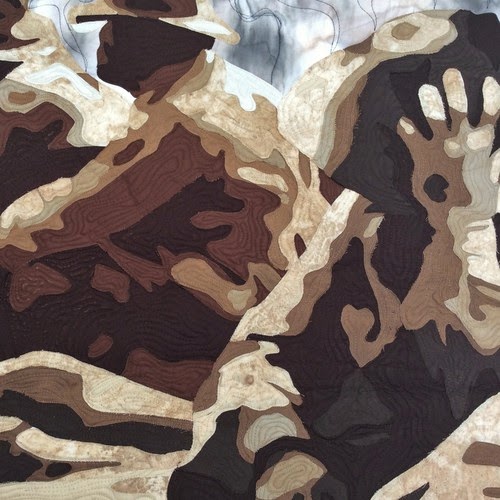 Reunion
From late 1915, an Anzac Buffet operated in the Domain in Sydney. On ‘troopship days’, family and friends of returning soldiers would gather at this official meeting point, waiting at the railings for their loved ones, full of nerves and jittery with excitement. They prepared for this day, wore their smartest dresses and their finest hats, and with an awareness that their loved ones may not return as whole as they had departed – as Constance Campbell wrote in 1920,
“Many a woman will have tender memories always of those enclosed grounds of the Buffet, for there the reward of her years of anxiety and loneliness has been bestowed, as her soldier came to her again. Scenes of gladness, scenes of sadness, too, have intermingled there, as the joy of reunion has been tempered with the shock of meeting one cruelly maimed or disfigured in the ghastliness of war.” 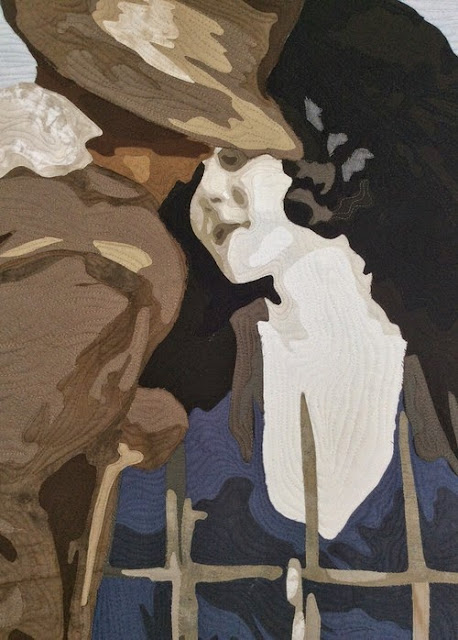 After
By the end of the campaign, around 8,700 men had lost their lives at Anzac Cove, and almost 18,000 had been wounded. The soldiers began burying their dead almost immediately after the landing, and while every effort was made to identify and bury the dead men quickly, it wasn’t always possible – the combined Gallipoli cemeteries now hold 22,000 graves, although only 9,000 of these are identified burials. Saying goodbye to their fallen mates was one of the hardest parts about leaving;
“There’s one bloody thing I don’t like – this sneaking away and leaving our mates behind.”
Trooper Dave Clark. 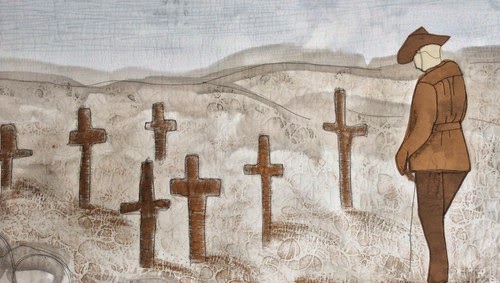 Thanks for creating such gorgeous quilts Lucy.  I hope they hang somewhere that many people will see them to remind us of the heroes that came before.
Till next time……………..keep spreading the word and happy stitching!
Jan-Maree