Post Views: 2
Last week I made a quick trip to Canberra and as well as catching up with some friends I also visited the Australian War Memorial to see where the Centenary Quilt is displayed. 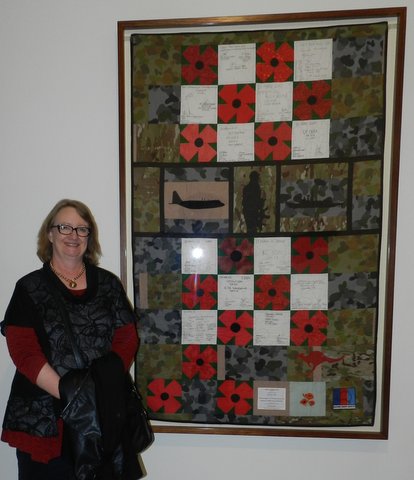 It is really easy to find, if you know where it is.   If you can’t read these maps clearly enough here then you can check them out online here 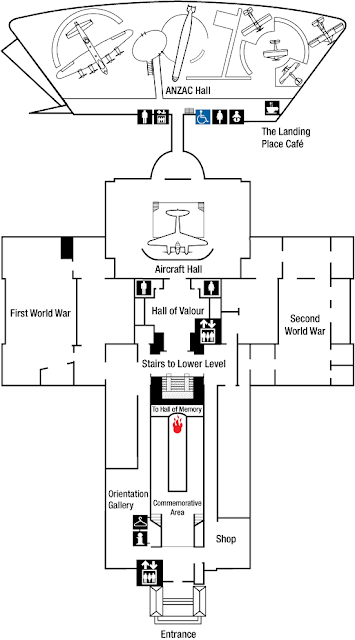 Walk up the steps at the main entrance and turn left into the Orientation Gallery.   Walk down to the Stairs to the lower lever.  If you need the lift there is one nearby.
Once downstairs you will be looking at the entrance to the Afghaninstan Display. 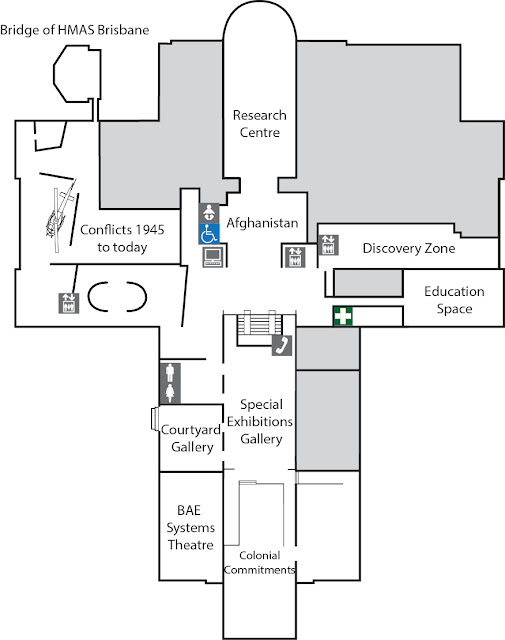 To the left of the Afghanistan Display there is the Conflicts 1945 to Today section.  Look for the portrait of the amazing Ben Roberts-Smith and head towards him 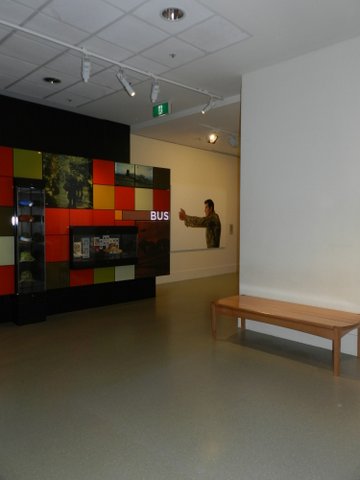 Who would not fail to be impressed but this larger than life portrait of a man who towers over most of us in so many ways normally. 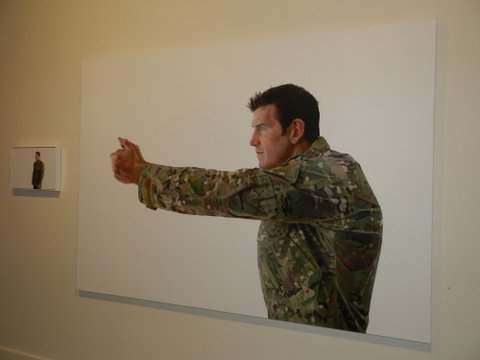 Right opposite Ben is the Centenary Quilt seen here with my niece, Meghan, who was visiting Canberra from Melbourne, sadly not at the same time as me. 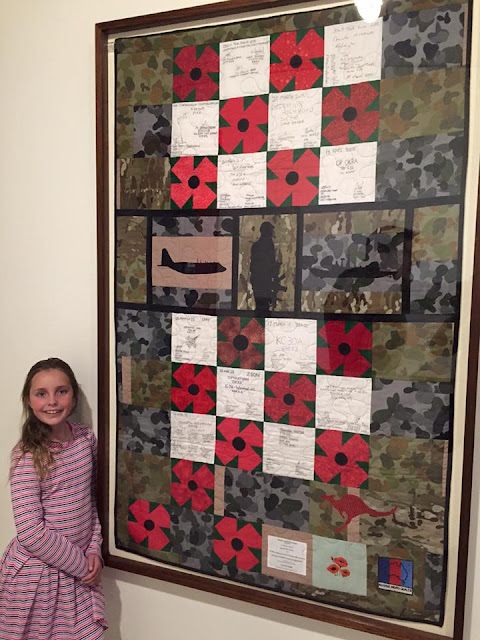 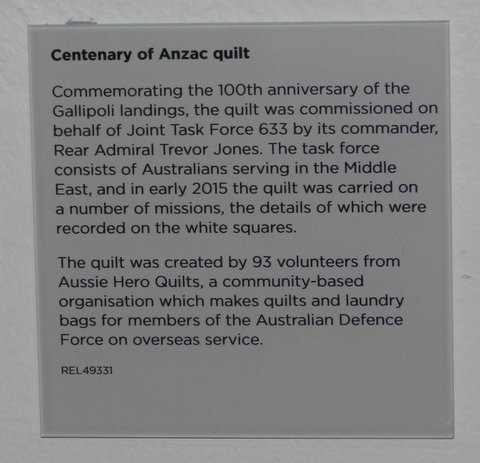 I can’t stress this enough.  If you want to see the quilt, and if you can get to Canberra, then you really need to do so before the end of November. I do not know the exact date that the quilt will be returned to storage but I have been told that there are no further plans to display it in the War Memorial at a later date.  This may be your only chance to see it.
There have been suggestions, LOTS OF THEM, that I endeavour to arrange to have the quilt displayed elsewhere but I have looked into it, including meeting with AWM Staff and it is just not as easy as you might think.  Firstly this is a textile, and textiles need to be displayed in a way that protects them from light and, to put it bluntly, bugs!   This is now the property of the Australian War Memorial and they intend to preserve this quilt so that it will last for as long as possible.   Any application to borrow the quilt for display purposes can only be submitted by an approved borrower, which Aussie Heroes is not.  Applications must be submitted 18-24 months in advance.  Whats more, there are costs involved with regard to the administration and the transportation of the quilt.  I do know some people who are interested in pursuing this avenue but, whilst I am happy to assist in anyway that I can, there is nothing I can do personally with regard to borrowing the quilt.
I would have liked it to be possible for more of those who had a hand in creating the quilt to be able to see it, but that was never going to be easy given all the widespread locations in which we live.
Some people have asked me if it was worth all the effort of everyone involved, from the quilters to the defence personnel who toured the quilt around the Middle East while they had it.
I say ABSOLUTELY it was!
I have been promised, though am yet to receive, a disc of photos and especially videos of the troops handling the quilt and I have been told that many of them became quite emotional about it.  I will share those when I receive the disc.
I had been conflicted about how to recognise the Centenary within Aussie Heroes because our focus is, and always will b, on getting quilts and laundry bags to our serving members.  Making this quilt gave us an opportunity to pay homage to our forebears but also to include the serving men and women of the present.  This quilt meant a great deal to those who saw it.  I think if there had been more white patches on the back of the quilt we could have filled them with the signatures of those who wanted to sign it.  I know some who were devastated that they missed out on the opportunity.   This quilt told the troops that we care.
For me, the quilt represents how the troops feel about what we do.  It is no small thing that Rear Admiral Jones wrote to me in December last year and said he wanted to “suggest a more befitting manner by which the collective efforts and generous philanthropy  of your peers can be enshrined within Australian Military History.”
He went on to say in his letter to me that
“I recognise that you and your volunteers do not undertake this work for anything other than the most honourable and selfless motives, which does them all much credit, but you must accept that we in the Defence Force would want your collective contribution to the welfare and support of our sailors, soldiers and airmen to be given the full weight of long term public recognition that we think it deserves.”
Please make time, if you can, to go to Canberra and check out “our quilt.”  Please send me a photo of yourself with it if you go.
And if you can”t make it to the War Memorial until after the end of November don’t forget that if you give them some notice you can make an appointment to see the quilt in a private viewing.  It is really not that hard to do and well worth the effort.
Till next time………………keep spreading the word and happy stitching!
Jan-Maree xx

← Prev: Grati-Tuesday 15 September Next: More from HMAS Newcastle!! Thank you. →