Before I get on with our usual happy mail.. here is a little extra. Sue N found this article online and I thought you would like to see it…. Note I have a policy of not naming our service men and women so have deleted names from this article.


Aussie Iraq hospital not like back home
Medical staff in Iraq work in a harsh environment and go to work wearing handguns because of the security risk.
Working in the Australian and New Zealand hospital in Iraq is different to Australia, with mud, dust and the occasional errant gunshot.
On New Year’s eve, a bullet fired by a celebrating Iraqi perhaps kilometres away whizzed through the operating theatre tent wall, bounced off the floor and was found on the operating table the next morning.
Unlike any hospital in Australia, medical staff including the doctors wear sidearms because of the security risk.
Then there are some curious similarities.
“Working at Liverpool hospital … we often see gunshot wounds,” said army reservist Major D, an orthopaedic surgeon whose day job is in Sydney’s western suburbs.
“That really has helped me understand this environment.”
The hospital, staffed by 37 Australian, New Zealand and US personnel treats members of Task Group Taji engaged in training Iraqi troops on the Taji base, a short distance north of Baghdad.
It’s been needed a couple of times. Last week, an Australian soldier accidentally shot himself on the leg, inflicting a serious injury requiring specialist treatment.
Another soldier broke his arm when he fell off a Bushmaster vehicle.
The hospital has been set up in some old buildings on the base but the nerve centre is a large purpose-built tent which features an operating theatre and intensive care room.
Wards are named after pioneering Australian army nurse Grace Wilson and New Zealand army medic Jacinta Baker, killed in Afghanistan in 2012.
Dave says this remains an austere environment with limited equipment and specialists, compared with big hospitals in Australia.
But unlike civilian hospitals, most patients are fit young men.
Squadron Leader R, a reservist general surgeon and burns specialist from Brisbane, said treatment of wounded soldiers had changed markedly and that stemmed from more than a decade of experience of conflict.
At the start of the Iraq war in 2003, seven per cent of combat deaths were regarded as preventable, mostly though blood loss from traumatic leg wounds, typically caused by improvised explosive devices.
That now stands at 1.5 per cent. All soldiers now carry tourniquets and are taught to apply them speedily to themselves or to an injured comrade.
There have been advances in aeromedical evacuation, resuscitation with reconstituted blood and surgical techniques.
“A lot of the lessons you see us practice now have been moved back into the civilian world,” he said.
The gold standard for trauma care remains the coalition hospital at Kandahar, Afghanistan. Providing a wounded soldier had a pulse when he arrived, he stood a better than 98 per cent chance of survival.
The hospital features some Anzac touches.
A concrete blast wall has been painted with an eye-catching mural, the work of Major S.
“Last year I went to the Gallipoli service in Turkey, something I always wanted to do and thought seeing it’s an Anzac contingent here, I thought I would so something Gallipoli related,” he said.
It features figures of Australian and New Zealand soldiers and the rising sun. All staff were invited to paint their own poppy.
Intensive care and ward beds all feature quilts by members of the group Aussie Hero Quilts, volunteers who make quilts with Australian themes for servicemen and women overseas.
Hospital commanding officer Major B said this was a little piece of home for their patients.
“They do it out of the goodness of their hearts and that is something that is really appreciated by the servicemen and women deployed overseas,” he said.
Since starting in 2011, the group has despatched more than 6000 quilts and laundry bags to personnel abroad.

Basically, for the new people, the Happy Mail Post is when I share the quilts, tops, blocks and laundry bags etc that have been sent in over the previous week.   Caroline normally does this post for me and she is ably assisted by Helen C who collects the mail, photographs it and then sends us the photos.  This week the only mail received was delivered to me so I gave Caroline the week off. 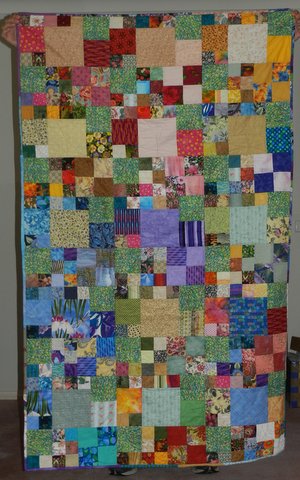 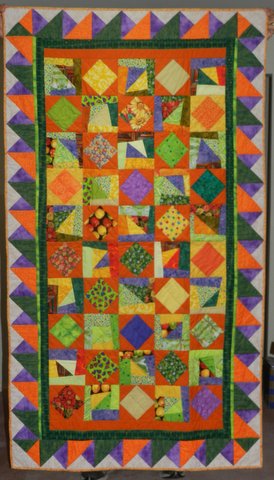 And we have three great scrap quilt tops sent in by Peggie.   Just LOVE scrap quilts! 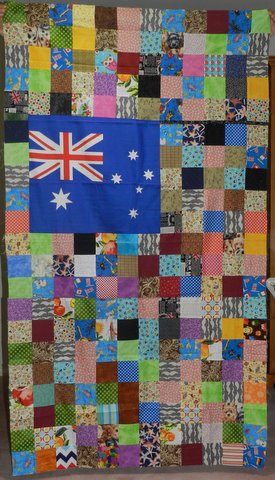 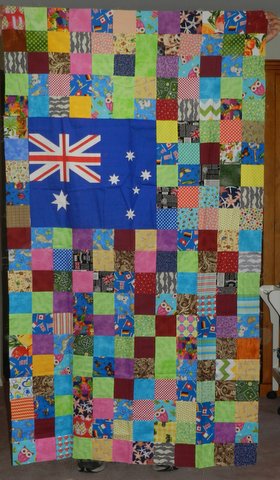 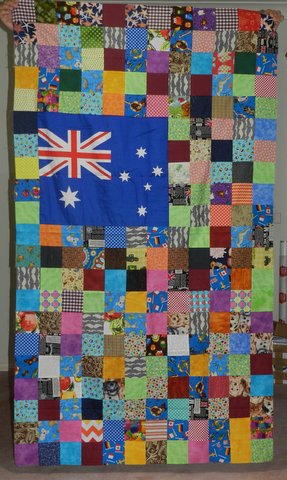 Okay, so this is not exactly happy mail but it made me happy to see that more of our quilters had been in to the Australian War Memorial to see the Centenary Quilt.
Jacquie D 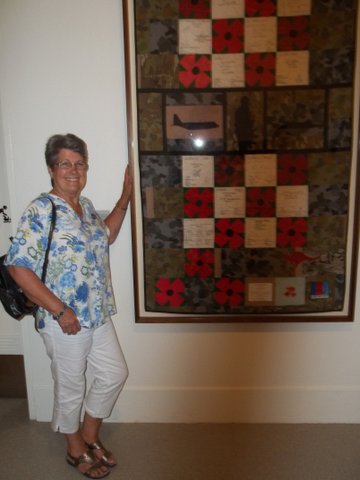 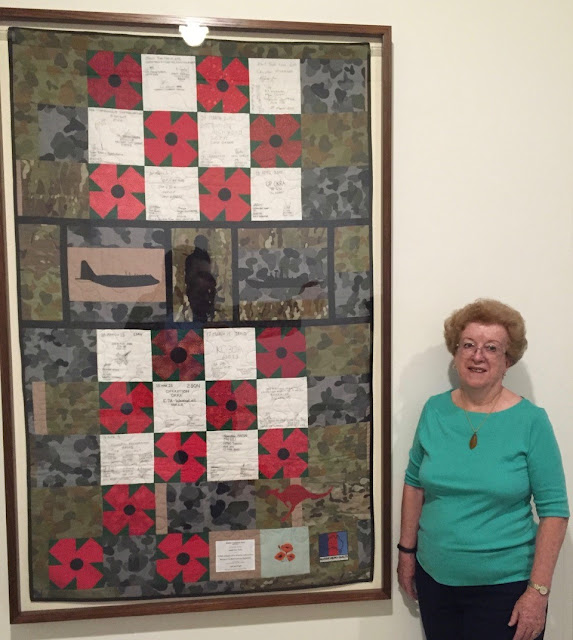 Please note that if you have not seen it time is running out.   It will be on display only until the middle of February.
After that you will have to make an appointment with two weeks’ notice.
That’s all for me today…. I am off to pack up some boxes with the laundry bags we made on Saturday at the Penrith Sewing Day!
Till next time………….keep spreading the word and happy stitching!
Jan-Maree xx