Post Views: 16
We have been sending quilts to the families of the Fallen since 2012 but often they are sent off quietly without ever appearing on the blog as I feel we should respect the familes’ privacy, especially as many of them have been given their quilts some years after their loved one passed away.   I don’t often talk about them on the blog for this reason but I know many of the quilters would like to know about them, especially when they have contributed to them by making blocks or putting them together.
I shared the story of one Fallen Warrior Quilt and its recipient last week on the blog with the blessing of his widow.  I can also tell you that earlier this year another family received a Fallen Warrior Quilt at the Australian War Memorial on the anniversary of their loved one’s death.

Last week I posted off a Fallen Warrior Quilt to the family of LCPL Andrew Jones. Today his mother received it and called to thank me and all of those who made blocks for it, saying that she thinks it is beautiful.
Tonight I can tell you a little bit about another quilt that was presented to the family of PTE Benjamin Ranaudo.
Fallen Australian Army soldier Private Benjamin Ranaudo has been forever immortalised at High Range training area near Townsville, Queensland, where a marksmanship range was named in his honour during a ceremony on 17 November 2015.

Supported by 1st Battalion, Royal Australian Regiment (1 RAR), family and friends of the late Private Ranaudo gathered for a moving ceremony to rename a marksmanship range in his honour.

At the same time a Fallen Warrior Quilt was presented to Ben’s mum and dad. It was warmly received and they were very touched by the gesture. 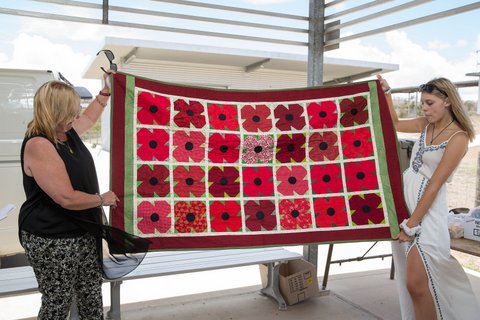 Private Ranaudo enlisted in the Australian Army on 19 May 2006 and, after completing basic recruit training at Wagga Wagga in NSW, he was allocated to the Royal Australian Infantry Corps and commenced the next phase of his training at Singleton, NSW.

In November 2006, Private Ranaudo was posted to 1 RAR at Lavarack Barracks in Townsville, Queensland, where he served with distinction. He completed the basic reconnaissance course, combat first-aid course, qualified as Bushmaster protected mobility vehicle driver and also represented 1RAR in the highly prestigious Duke of Gloucester Cup, a skill-at-arms competition.
In 2007, Private Ranaudo deployed to Timor-Leste (East Timor) on Operation Astute and, later, also served in Afghanistan on Operation Slipper.
On 18 July 2009, Private Ranaudo was killed by an anti-personnel explosive device during his deployment to Afghanistan.

Gone but not forgotten.

Till next time……Lest We Forget.