Disarster at Fromelles…. by Grant Turrill

Post Views: 16
Disaster at Fromelles
July 19-20, 1916
The worst 24 hours in Australian history occurred 100 years ago at Fromelles. The Australians suffered 5,533 casualties in one night and the Australian toll at Fromelles was equivalent to the total Australian casualties in the Boer War, Korean War and Vietnam War put together.
The purpose of the attack at Fromelles was to prevent the Germans from dispatching reinforcements south to the Somme front where the great British offensive, which began on 1 July 1916, was underway.
Although later World War 1 actions would be more deadly for the AIF, Fromelles was the only one to achieve no success.
This was the first occasion that the 1st AIF saw action on the Western Front in World War 1, and involved the Australian 5th Division and the British 61st Division which attacked a heavily fortified German line across a no-man’s land which in places was over 400 yards wide.
The 61st Division attack failed in the end, with the loss of over 1,500 officers and men out of 3,400 who took part in it. The Australian left and centre reached the German trenches and held their second line during the day and night, but the right was held off by a fierce machine-gun barrage and only reached the front line in isolated groups. The action was broken off on the morning of 20 July.
Source and more details here
On 11 November 1918, after the Armistice, Charles Bean, Australia’s official war historian, stood on the battlefield of Fromelles: ‘We found the old no-man’s-land simply full of our dead’. These men died on 19–20 July 1916 assaulting the German lines, and their remains lie buried in VC Corner Australian Cemetery, which is in the middle of the old no-man’s-land between the Australian and German trenches of 19 July 1916.
The VC Corner Cemetery is the only all Australian cemetery in France, and there are no headstones, instead, 410 roses grow above the unidentified bodies of the Australian soldiers. They died all around here. There are two large concrete crosses set flat on the ground, to the left and right near the cemetery entrance. On the wall at the rear are the names of 1,299 Australians who died in the battle and have no known grave. Although the graves are not individually marked, they are individual graves, not a mass grave. 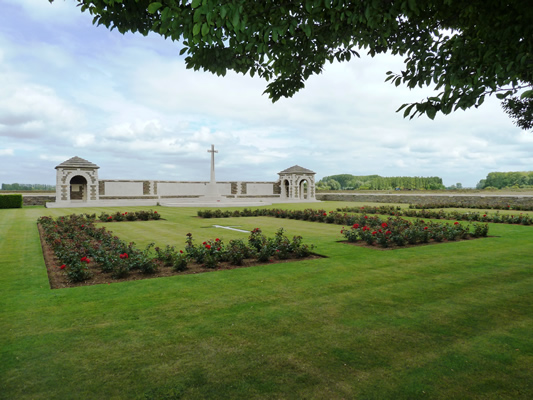 VC Corner Australian Cemetery – Fromelles
Source
“Don’t forget me cobber”
Sergeant Simon Fraser was a member of the 57th Battalion AIF, part of the 5th Division that wasn’t involved in the initial attack on the 19th July, but was present throughout the battle.
When the battle was over, Fraser and others began the dangerous and difficult task of retrieving the wounded from no man’s land. In a letter home dated 31st July 1916 he wrote;
“
“We found a fine haul of wounded and brought them in; but it was not where I heard this fellow calling, so I had another shot for it, and came across a splendid specimen of humanity trying to wriggle into a trench with a big wound in his thigh. He was about 14 stone weight, and I could not lift him on my back; but I managed to get him into an old trench, and told him to lie quiet while I got a stretcher. Then another man about 30 yards out sang out “Don’t forget me, cobber.” I went in and got four volunteers with stretchers, and we got both men in safely”
Fraser was not decorated for his great courage in retrieving the wounded from the battlefield; his efforts were just part of what had to be done. However, his heroism has since been recognised in 1998, by a sculpture of him by artist Peter Corlett that stands in the Australian Memorial Park at Fromelles. The statue is entitled ‘Cobbers’.
It is not the memory of the military disaster of Fromelles which is remembered here, but rather the courage and compassion of those who risked their lives to help the wounded.
The Victorian farmer never returned home: he was killed at the second battle of Bullecourt on 12 May 1917, aged 40. His body was not found, and his name appears on the Australian National Memorial at Villers-Bretonneux, together with the names of more than 10,000 Australians who died in France during the First World War but have no known grave. 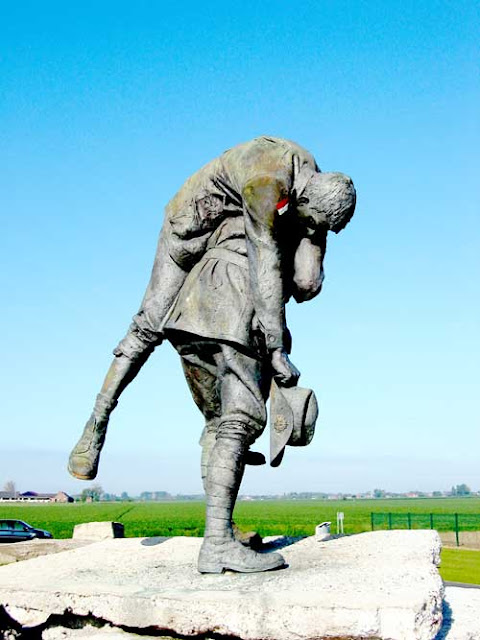 ‘Cobbers’ statue Australian Memorial Park – Fromelles
Source
Fromelles (Pheasant Wood) Military Cemetery
In the 1980’s and 1990’s, Lambis Englezos, a retired Melbourne art teacher with an interest in military history, became curious about the missing casualties of Fromelles, and he felt that there were around 163 men who could not be accounted for in the records of missing Australians.
Together with others in Australia and Britain, they scoured all available records, and together with aerial photographs, they identified a possible grave site at Pheasant Wood which was located behind the German lines that the Australians and British had attempted to take in the ill-fated attack on the 19th July.
Approaches to the government weren’t well received. “There was a lot of active discouragement,” said Mr Englezos,
“We were told by the official gatekeepers of history that a site that big couldn’t possibly have been missed after the war.”
Source and further info
He further states
“Even with the discovery and the confirmation in 2008 there was a debate awaiting a political determination of how to proceed. Thankfully they made the decision to go back in 2009 and recover [the bodies]. They recovered 250 soldiers from those pits eventually”
The Commonwealth War Graves Commission was asked by the British and Australian governments to construct a new cemetery to house the bodies. Building work on the cemetery began in May 2009, and the main structural elements were completed by January 2010. The dead soldiers were reburied with full military honours in a series of funeral services in January and February 2010. The ceremonial first reburial took place on 30 January 2010. Fromelles (Pheasant Wood) Military Cemetery
SourceSource and further info
Grant is the husband of one of our quilters, Pennie, and his efforts in writing and researching this piece are much appreciated.
On the 19th July 2016 they will attend the Pheasant Wood headstone dedication ceremony at this cemetery for those soldiers buried here who have recently been identified
LEST WE FORGET