Post Views: 2
Yesterday was the much awaited presentation of the Centenary of ANZAC Quilt to the Australian War Memorial.   A small group of quilters were able to come along and be there when it was presented and I was delighted that Garry and Katrina Robinson also drove down from Sydney for the day.  For those of you who do not know Garry’s story (you can check it out here).  He is one of the reasons I was motivated to start Aussie Heroes.  Since then he and his wife, Katrina, have become good friends of mine and I was delighted they were able to come. 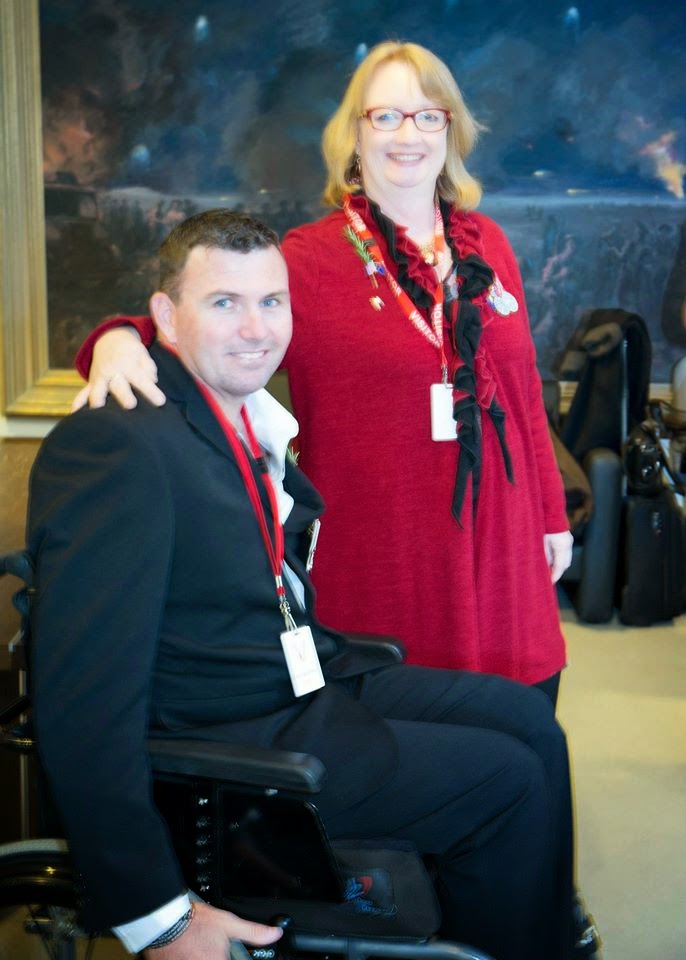 Steph (left) is a Canberra local but Rita M and her husband Bob timed their trip from SA to visit grand children especially so that they could be there yesterday. 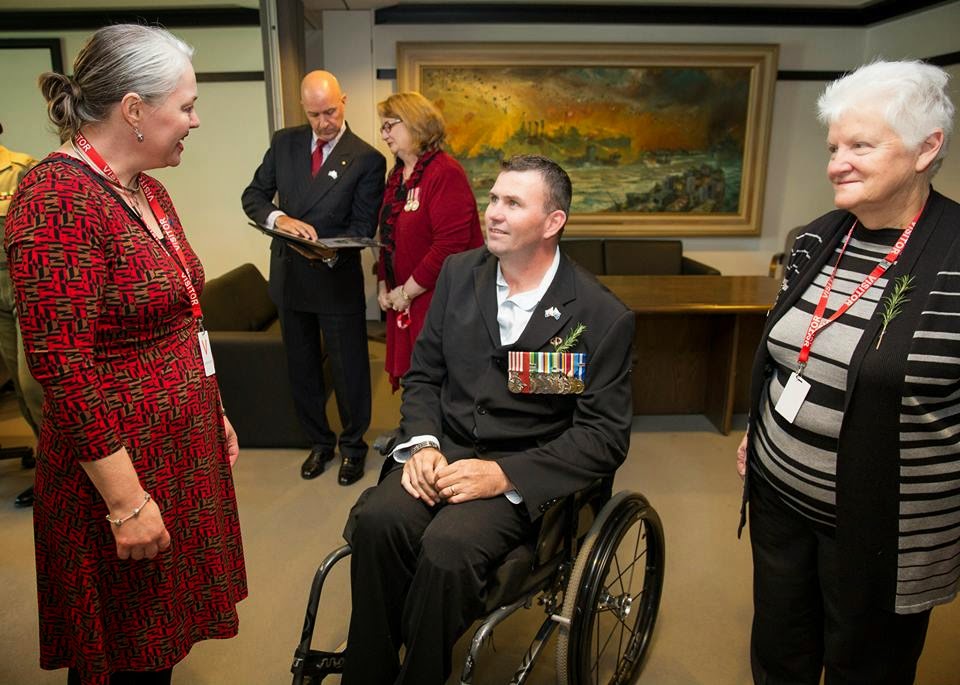 It was really lovely for me to meet Major General Craig Orme, whose quilt and laundry bag I had made myself, and who I had had some contact with whilst he was deployed.  Michelle was the RSM in Al Minhad Air Base last year and she and I had met once before, but it was great to catch up, albeit far too briefly. 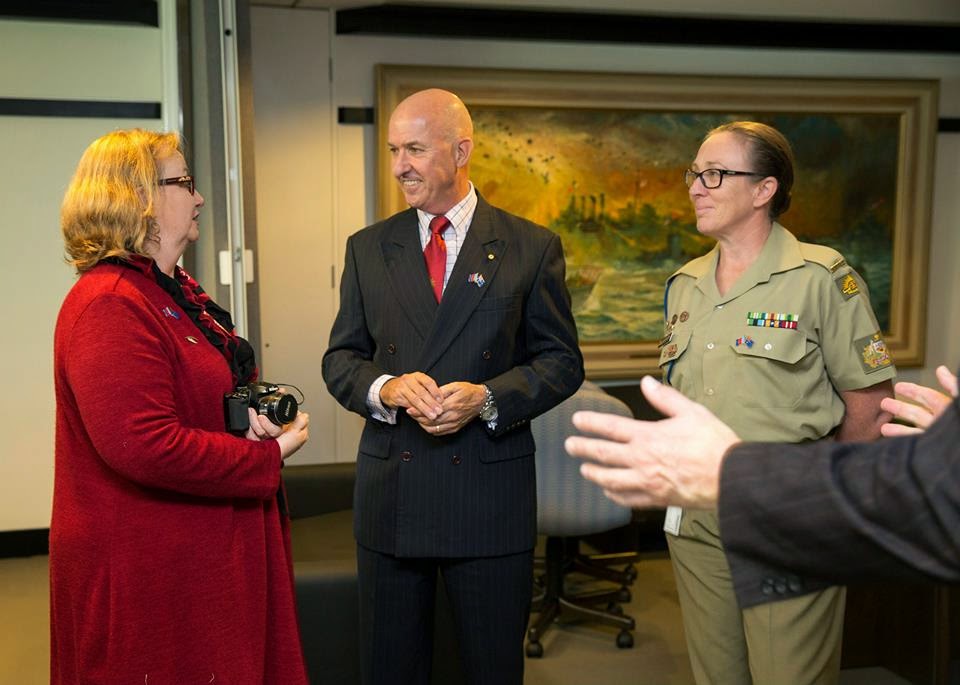 Michelle had been given the responsibility of taking possession of the quilt once it returned back to Australia and bringing it along to the presentation. 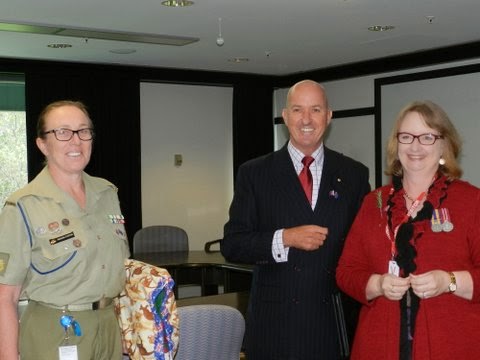 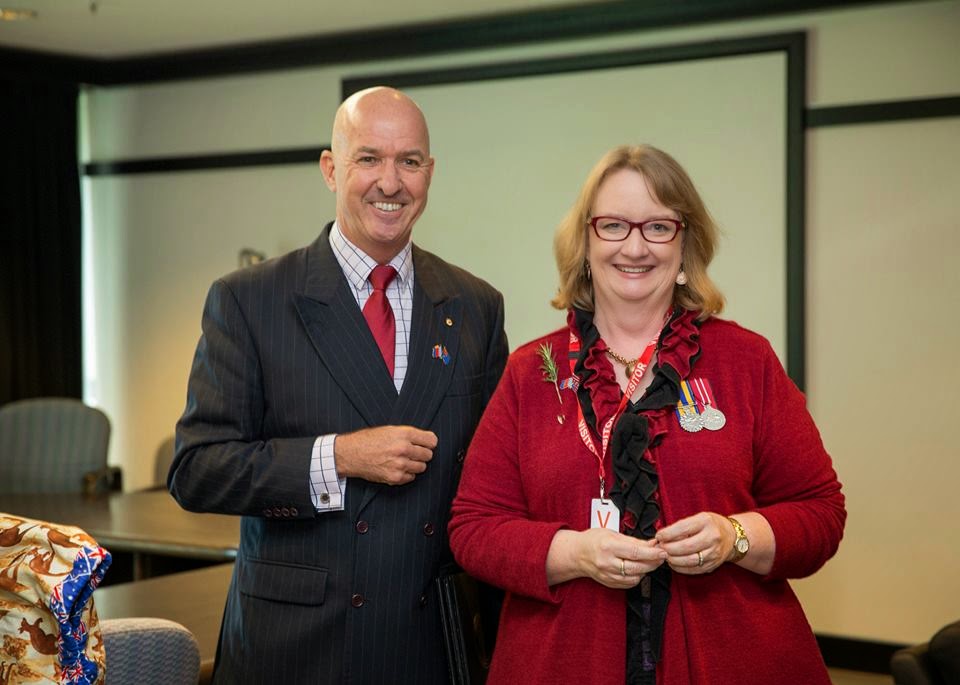 It was great for the quilters to hear from the General how much Aussie Heroes contributes to the deployments of those we send our quilts and laundry bags to. 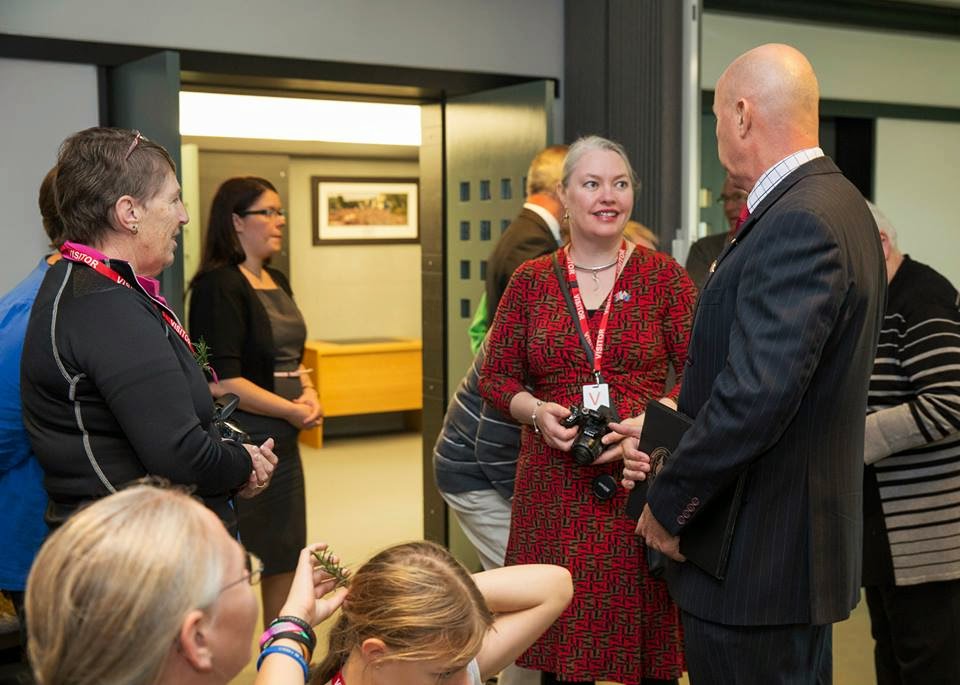 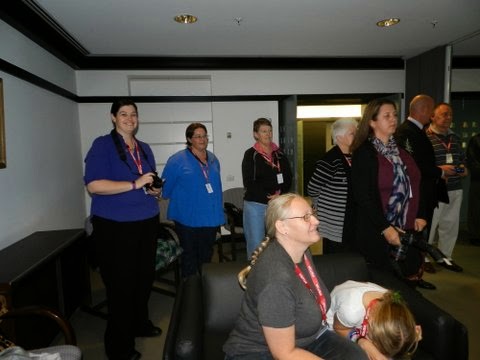 Major General Orme spoke briefly about how much the troops appreciate what we do and the fact that we are definitely making a difference.  I am always telling you that the troops appreciate what we do so I asked Step to tell me her impressions after hearing the General and this is what she wrote…
“Thoughts I had occur to me later after what MAJGEN Orme said, are that even the friends of AHQ probably underestimate the significance of what the bags and quilts mean to those who receive them.  It is after all, as the General said, a gift of thanks from someone who does not even know the recipient, to let them know people at home in Australia care for them.   What we do makes it easier for those serving overseas to be feeling like they are making a difference and they are appreciated for what they do.  As AHQ Friends we are doing something practical to support the operations overseas.” 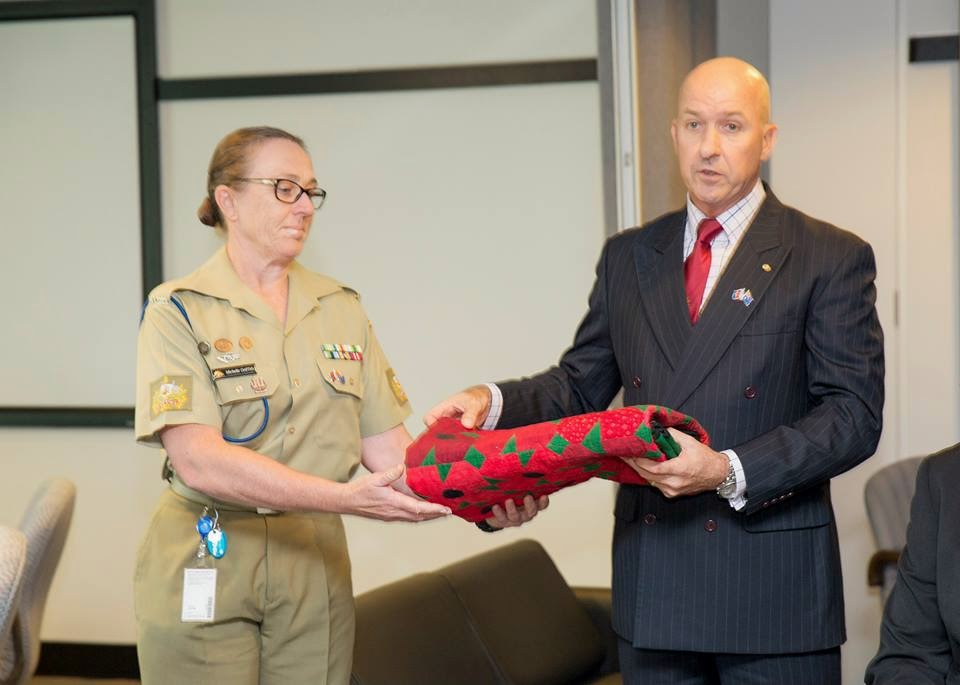 It was a great honour to have Dr Brendan Nelson there in person to accept the quilt. 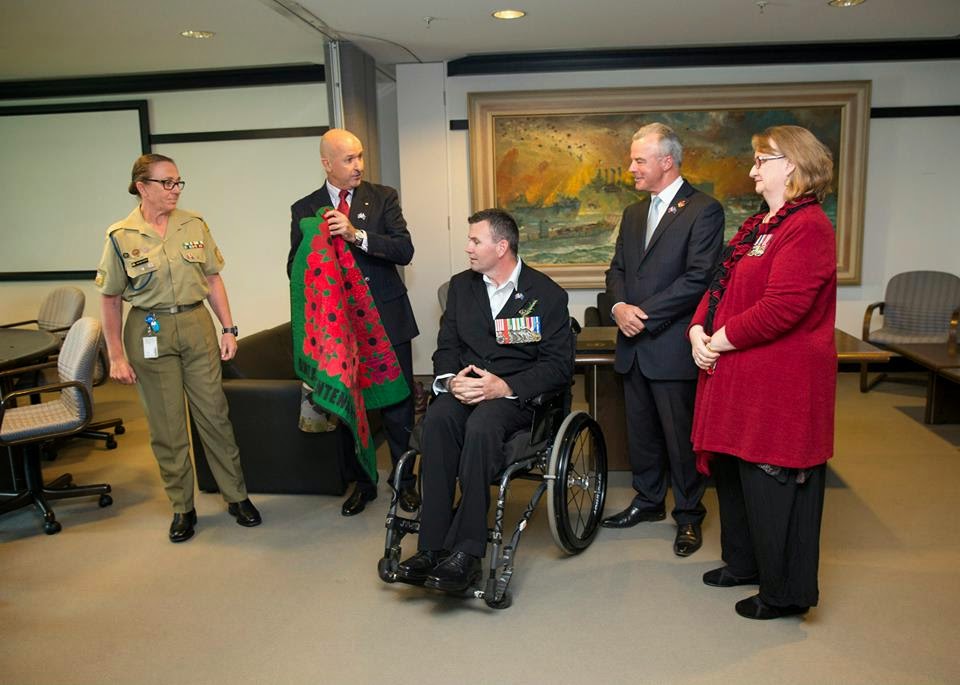 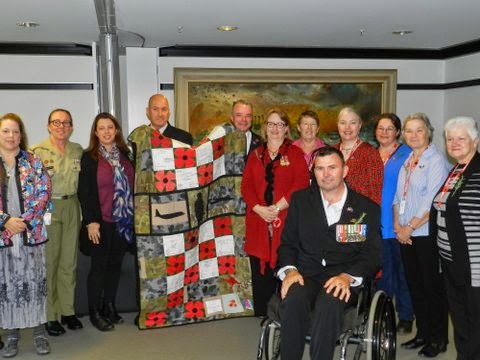 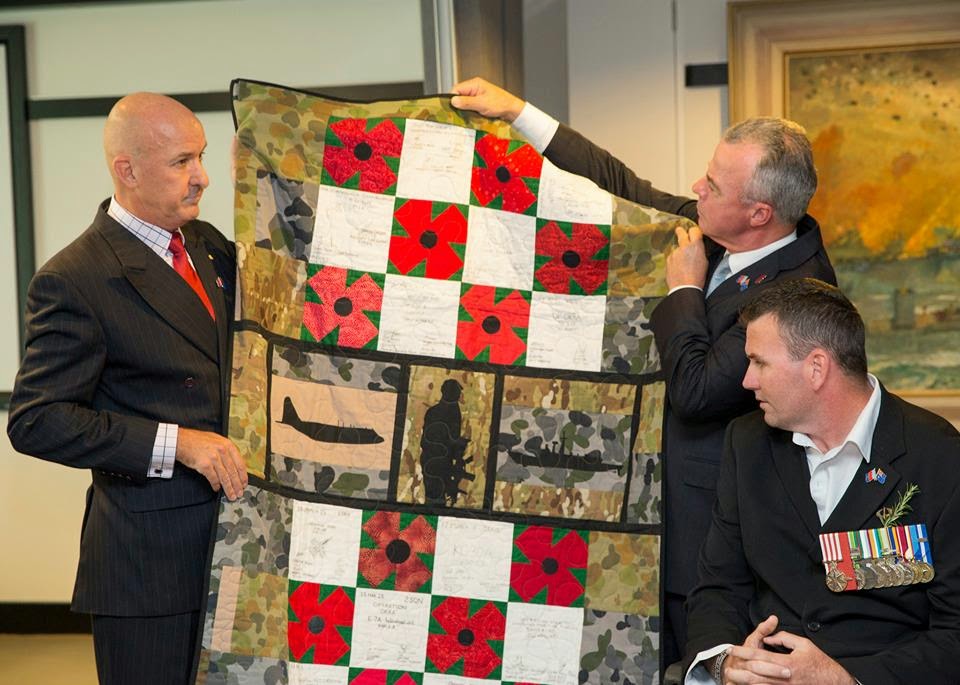 This will be one of the last times human hands ever touch the quilt I was told. 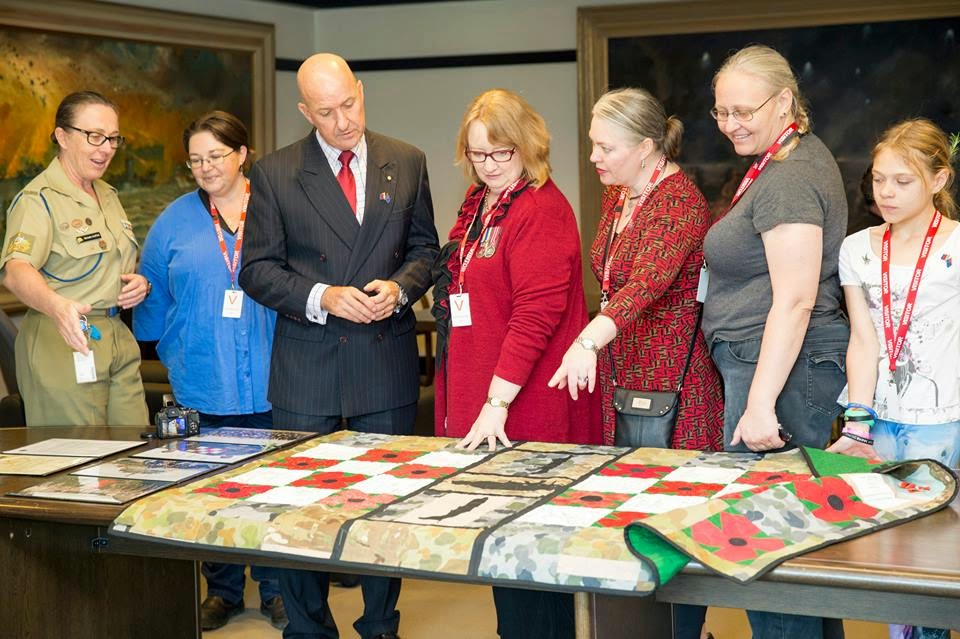 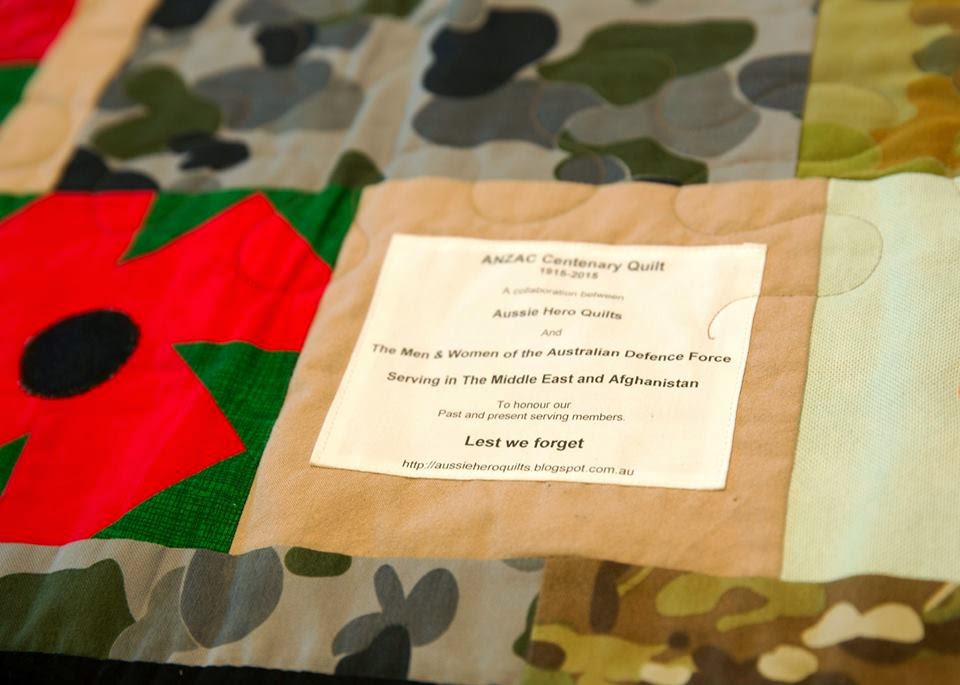 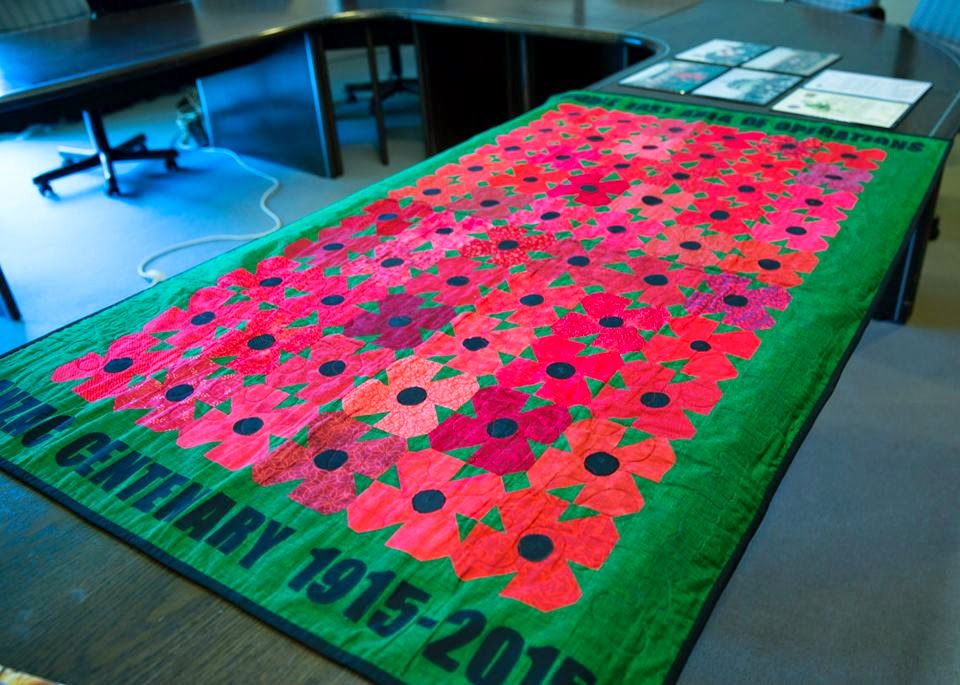 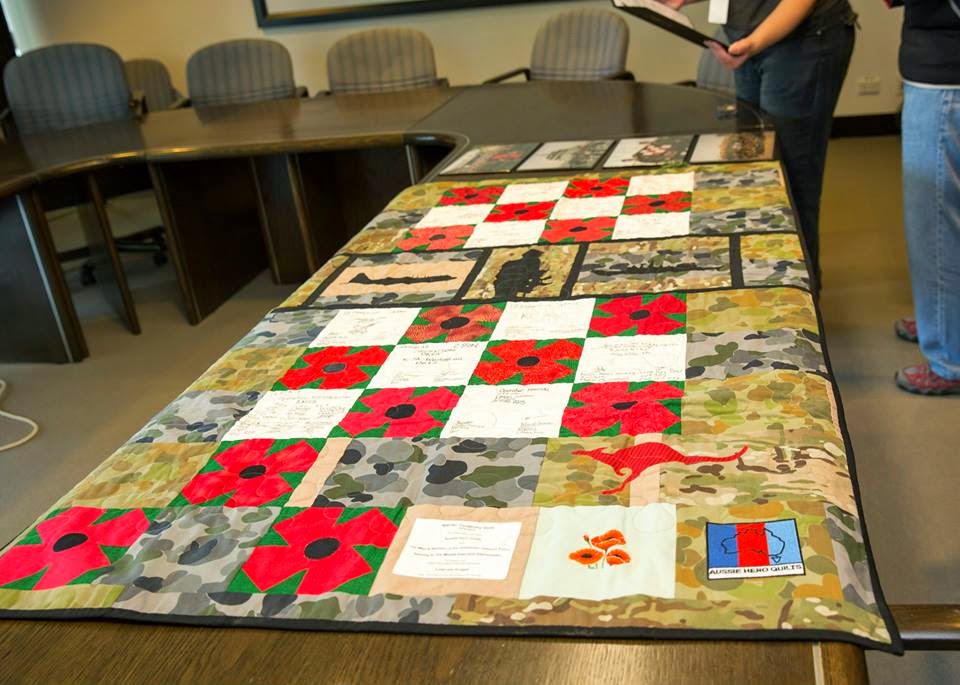 The quilt was accompanied by a certificate from the Middle East signed by Rear Admiral Trevor Jones  AO, CSC and Major General David Mulhall AM, CSC 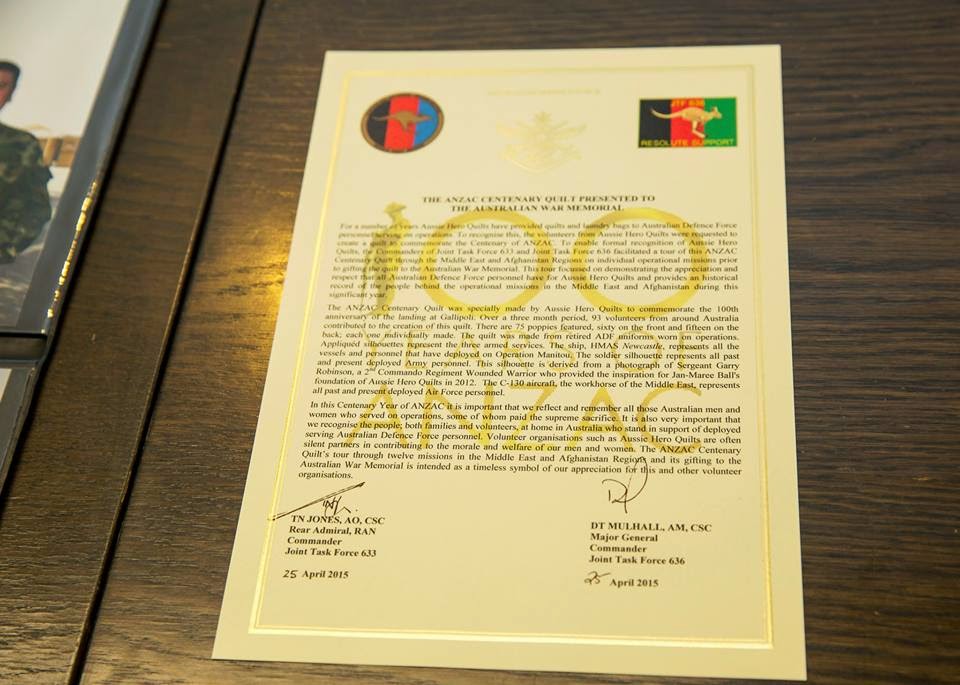 The certificate read
THE ANZAC CENTENARY QUILT PRESENTED TO
THE AUSTRALIAN WAR MEMORIAL
For a number of years Aussie Hero Quilts have provided quilts and laundry bags to Australian Defence Force personnel serving on operations. To recognise this, the volunteers from Aussie Hero Quilts were requested to create a quilt to commemorate the Centenary of ANZAC. To enable formal recognition of Aussie Hero Quilts, the Commanders of Joint Task Force 633 and Joint Task Force 636 facilitated a tour of this ANZAC Centenary Quilt through the and Afghanistan Regions on individual operational missions prior to gifting the quilt to the Australian War Memorial. This tour focussed on demonstrating the appreciation and respect that all Australian Defence Force personnel have for Aussie Hero Quilts and provides an historical record of the people behind the operational missions in the Middle East and during this significant year.
The ANZAC Centenary Quilt was specially made by Aussie Hero Quilts to commemorate the 100th anniversary of the landing at Gallipoli. Over a three month period, 93 volunteers from around contributed to the creation of this quilt. There are 75 poppies featured, sixty on the front and fifteen on the back; each one individually made. The quilt was made from retired ADF uniforms worn on operations. Appliquéd silhouettes represent the three armed services. The ship, HMAS , represents all the vessels and personnel that have deployed on Operation Manitou. The soldier silhouette represents all past and present deployed Army personnel. This silhouette is derived from a photograph of Sergeant Garry Robinson, a 2ND Commando Regiment Wounded Warrior who provided the inspiration for Jan-Maree Ball’s foundation of Aussie Hero Quilts in 2012.  The C-130 aircraft, the workhorse of the , represents all past and present deployed Air Force personnel.
In this Centenary Year of ANZAC it is important that we reflect and remember all those Australian men and women who served on operations, some of whom paid the supreme sacrifice. It is also very important that we recognise the people; both families and volunteers, at home in who stand in support of deployed serving Australian Defence Force personnel. Volunteer organisations such as Aussie Hero Quilts are often silent partners in contributing to the morale and welfare of our men and women. The ANZAC Centenary Quilt’s tour through twelve missions in the and Afghanistan Regions and its gifting to the Australian War Memorial is intended as a timeless symbol of our appreciation for this and other volunteer organisations.
Whilst we were there one of the staff members brought up another Aussie Hero Quilt.  This was donated to the Australian War Memorial by a Naval Officer recently.  It was made by Belinda Betts. 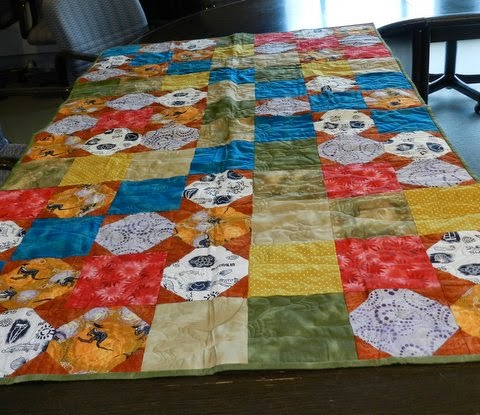 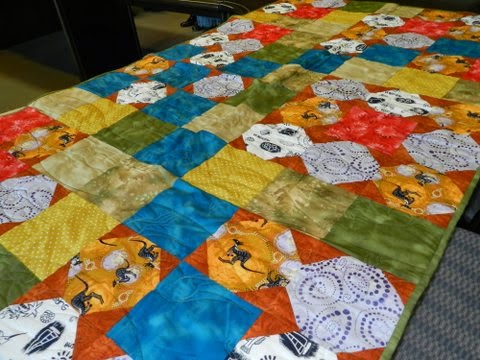 I never really publicly explained, as I wanted to keep it a surprise till I could show you some photos, that the quilt was taken on a very specific tour of the Middle East and Afghanistan and after each “mission” one of the white patches on the back was signed by highly thought of members in each area.  I hope to have more details on this in future days but for now I have close ups of each square and some of you will recognise a recipient or two in the names. 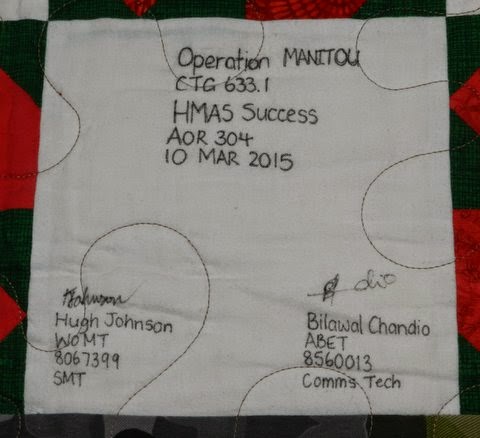 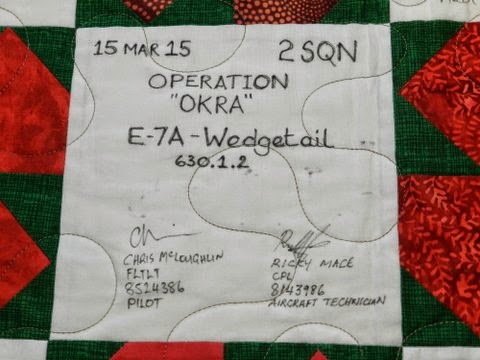 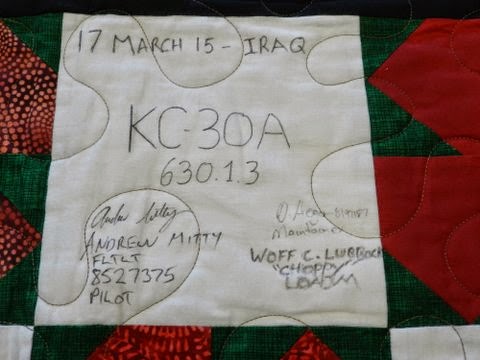 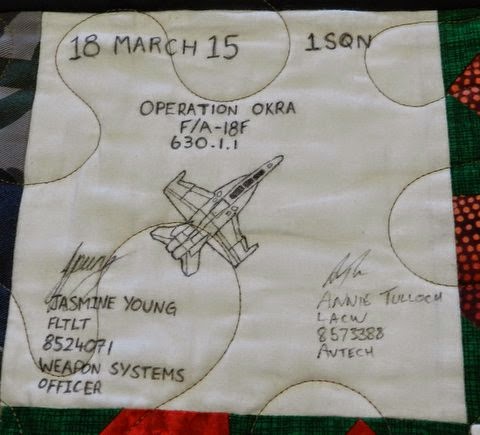 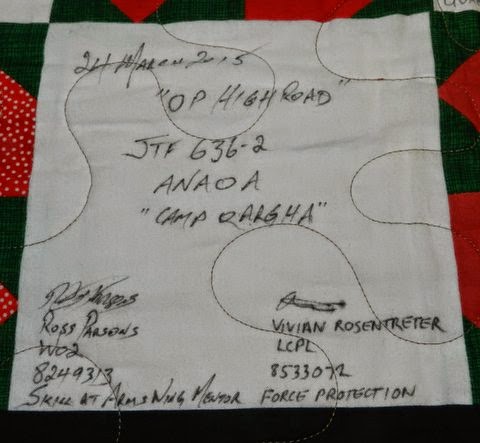 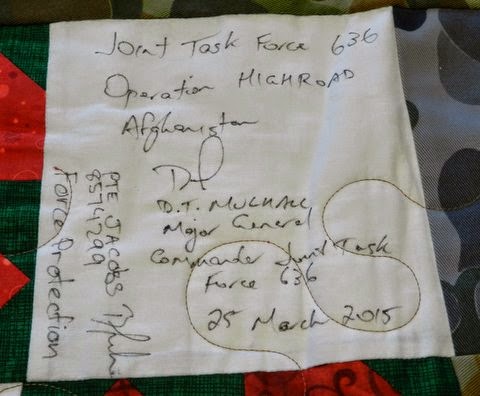 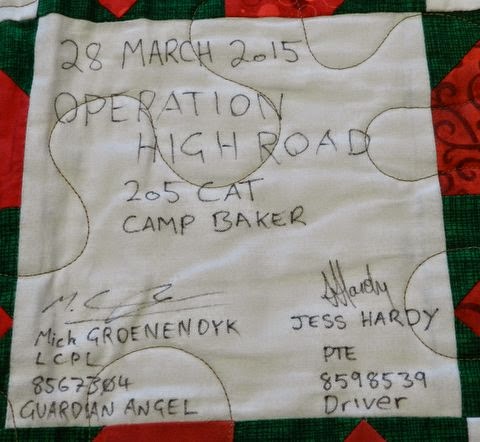 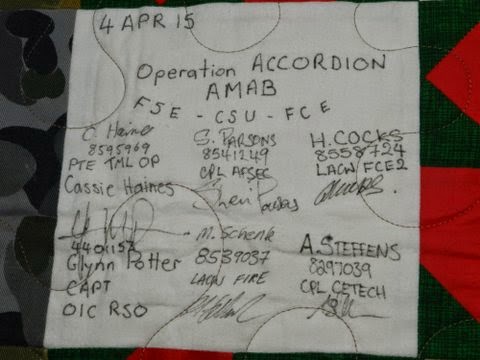 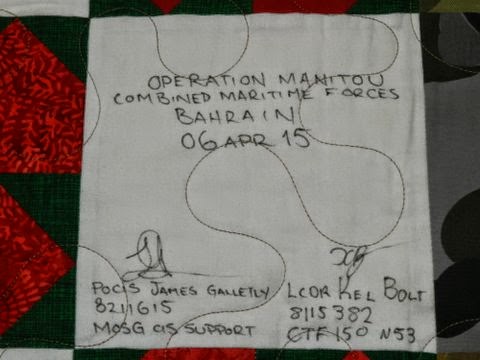 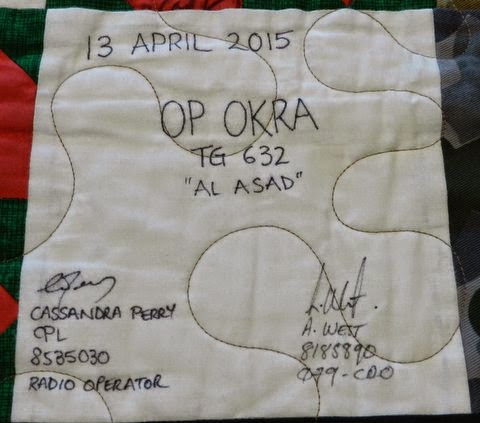 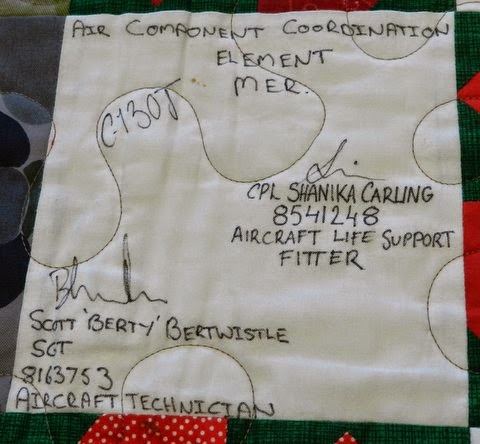 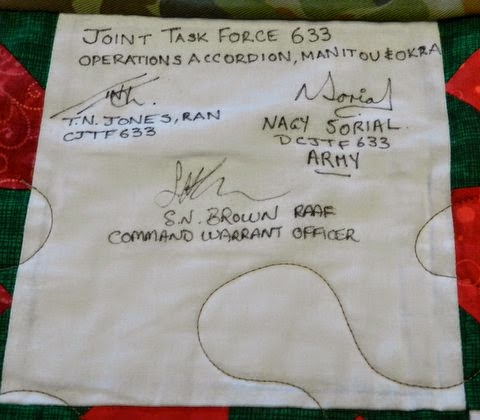 I will be disappointed if the quilt now goes to storage and stays there for the foreseeable future. Given the effort that was made to tour it around the Middle East and Afghanistan (wait till you see the photos) I would wish that more of you could see it.  I understand the space constraints that the War Memorial has, and have no wish to be critical of them as I have no experience in their field, but I think that in the Centenary Year this quilt is special, and not just to me, not just to those who contributed, but to many people, both serving and civilian.  If we cannot see it on display at the Australian War Memorial then I am hopeful that we can see it on display somewhere else that is easily accessible to the general public.  I have not given up and I am sure some suitable solution can be arranged to the satisfaction of all
I will do another post covering all the photos as soon as I can, given that I am just home from Canberra two hours ago.  I want time to add the captions to the photos so that you know what you are looking at.
And now to unpack…..
Till next time…………………keep spreading the word and happy stitching!
Jan-Maree  xx

← Prev: Completed Block of the Month Quilts Next: Kapyong Day..... →