Centenary Quilt…. last chance to see it on display and future access….. 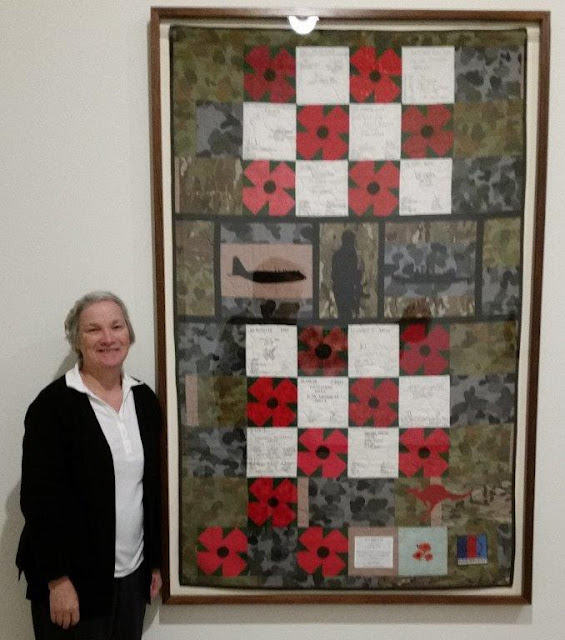 Gail wrote…
I visited the quilt at the War Memorial on 7 January with my best friend.  She was very moved by the quilt and its story, and we both thought that Lee Kernaghan’s “Spirit of the Anzacs” playing close by was such a fitting piece of music. We also spent time in the Afghanistan gallery – very humbling. I think the sandstorms from Afghanistan were blowing in the gallery – not many dry eyes.
Small world – the young man at the reception desk was able to tell us exactly where the quilt was – his mother was a contributor. One of the AWM staff stationed near the quilt was interested to know how I had contributed to the quilt, and then mentioned that one of his sons had been deployed some years ago (before Aussie Heroes) but was possibly going again in the next few months. I told him to tell his son to make sure he requests a quilt.
…..
If you want to get along and see it you need to hurry.  I have been told that the quilt will only be on display until Mid February.  Plans have been arranged to then demount the whole space and install other material from the Memorial’s collection.
The quilt will remain in the collection and can be viewed by visitors provided the War Memorial are given about 2 weeks’ notice. To request to view the quilt once off display, please email  and quote the accession number REL49331.001.
Till next time…………….keep spreading the word and happy stitching!
Jan-Maree xx