Post Views: 2
Well, I hope you have all had a good weekend.  I got some sewing in so I am happy.  This week is going to be a busy week.   Tomorrow I am off to Wollongong to meet a sewing group who have made some laundry bags for us.   On Wednesday I will be heading out to RAAF Base Richmond in the morning…. can’t say too much but should be able to share more with you on Wednesday night.
On Thursday we have a sewing day in my home – let me know if you are interested in coming along. We have a lovely friendly group that meets here now and whilst we get lots done, there is still time for a chat.
As promised here is a wrap up on my trip to Canberra.   In Wednesday’s blog I told you that my husband and I had drinks with someone who had recently returned from his deployment but I did not want to say too much as I did not want to spoil the surprise for the quilters who were joining us for morning tea on the Thursday.  Now I can tell you that the recipient was in fact Rear Admiral Trevor Jones (in the green check shirt) who returned home from his deployment at the Commander of the Joint Task Force.  During our chat on Tuesday night he offered me some goodies for our Block Party Challenge Prizes and generously offered to drop them off to me at Poppy’s on Thursday. Once he realised that I was meeting some quilters he opted to stay and meet them too.
Along with the Admiral we also has the pleasure of the company of Gary (far right), who had served as his Warrant Officer whilst deployed, having just returned in February as well.   A nicer pair of gentlemen you could not hope to meet.
The others in this photo are Stephanie N (who is nursing a couple of sore ribs and a broken elbow(?) from a sporting accident and yet still sewed some Chapel blocks!).  Steph is on the left in this picture, then there is yours truly, and then Leanne W and Shirley R, two more quilters.

Left to right, we have the Admiral, Gary, my friend Alison who is hiding there, Lynette L-L (who arrived home to a beautiful bunch of flowers from her latest recipient) and then back to Steph N. 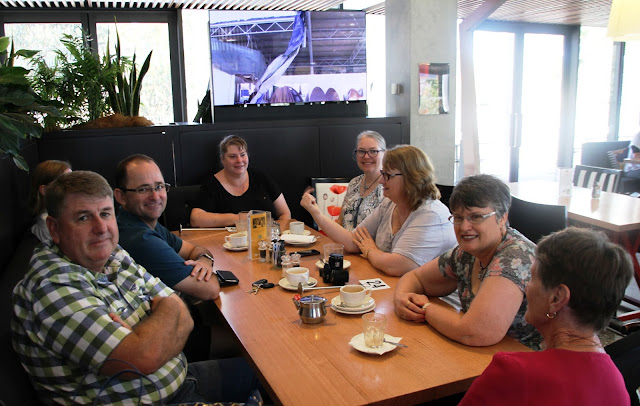 A lovely surprise was a brief visit by Chaplain Mark who some of you have met as he has attended some of our dinners. Chaplain Mark is the first chaplain I met after starting Aussie Heroes and is a great friend to all of us. 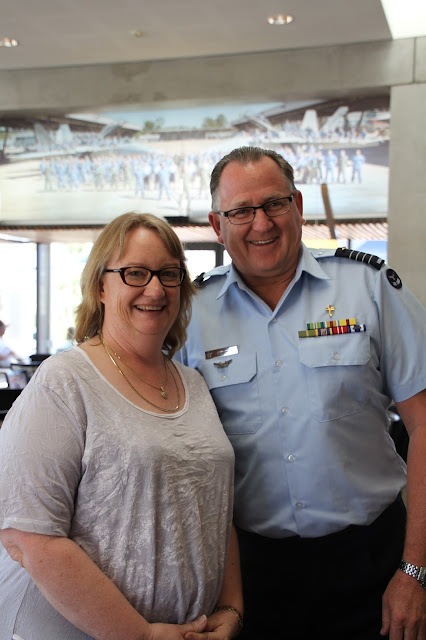 So there is the wrap up of my trip to Canberra. I did manage to squeeze in a catch up with another couple of recipients on the Thursday, one at 8am and one at 930am before meeting everyone at Poppy’s at the War Memorial but I did not get their photos!  and they probably prefer to maintain their privacy anyway.
I am already planning another trip down to Canberra sometime in May.  It is a good excuse to spend some time with my husband who is currently working down there Monday to Friday but also a good chance to meet recipients and to do some networking.
Till next time……………….keep spreading the word and happy stitching.
Jan-Maree  xx