Post Views: 16
A special visit to HMAS Warramunga in Hobart
The latest invitation from the RAN via Jan-Maree to join a ship for a ‘family day’ outing has prompted me to tell you about my ‘family day’ outing recently.
A few weeks ago, on a lazy Saturday, I sat down at lunchtime to read the paper.  On page 5 there was a photo and one of those ‘good news’’ stories about two former Tasmanian navy crew who were visiting Hobart on their frigate which had recently returned from a 9 month deployment in the MER.  Okay, it was Saturday and the cogs weren’t turning very quickly.  After a few seconds I thought, oh, I know of a frigate which recently returned from the MER, there were J-M’s photos of its arrival home, and the fabulous photo of the crew displaying all their AH quilts on deck.  So I reread the article and yes, it was the HMAS Warramunga, “our” AHQLB Warramunga.
My next thought was, goody, it is in port for 4 days, there will an open day, so how do we get to visit.  I googled but couldn’t find anything.  Thinking, thinking, I need to find out quickly, as last time a naval ship was in port, the tours were fully booked, and we missed out.  The cogs started turning a bit more quickly, I had made 4 laundry bags for the Warramunga crew and had heard back from a lovely chap who would know what’s what, if he is still on board.  So, I shot off a quick email.  A few hours late, an email arrived back:
Anne,
So lovely to hear from you.
We don’t have any official open days, but I’d be more than happy to give yourself and the grandchildren a tour of the ship.  We’re berthed at No.2 Macquarie Pier.  Shall we say 0900?
Sunday morning, the grandchildren and I rendezvoused at 0850 at Mac2.  The children were a bit excited as they had peeked through the fence, it is BIG!  At 0900 on the dot, a young man wearing his navy camo gear, his name on his chest and a big smile appeared.
A warm welcome and a bear hug for me (perhaps that’s why I sew for AHQLB?). 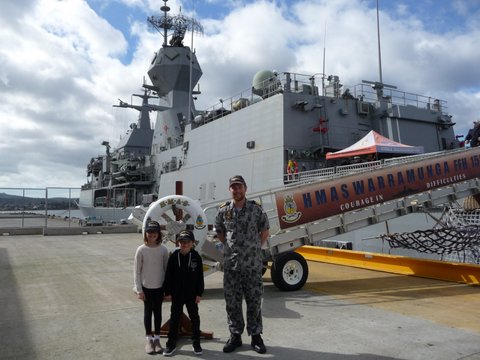 Well, what a tour.  Up the gang way, waved past security with smiles, first stop M ‘signed’ himself back on board using an old-fashioned “In/Out” peg board.  Little fingers itching to help rearrange the pegs, so we moved on to the helicopter.  How exciting is that.  Little people climbed into the cockpit and had a quick lesson on how to use the controls.   Then as we moved on, we ran into another of my LB recipients, warm handshakes all round.
We went everywhere, up and down ladders, along and through corridors, the gym, helicopter control room thingy, the sick bay, peeked into the engine room with its amazing artwork, the galley, the crew mess (children pleased to see that there was plenty of bread and tomato sauce). 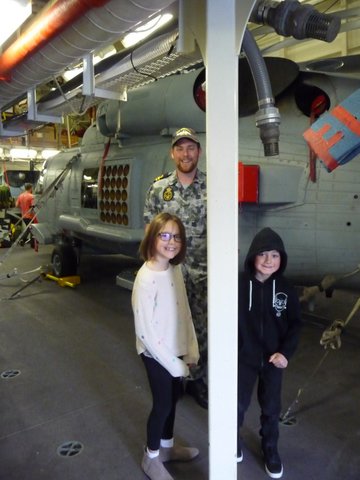 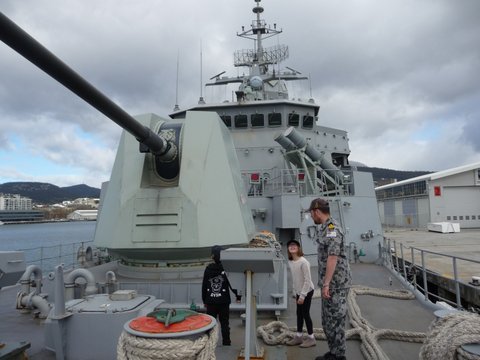 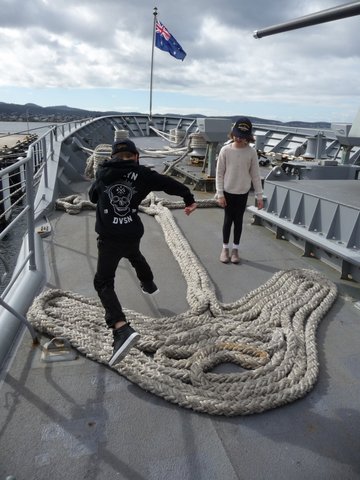 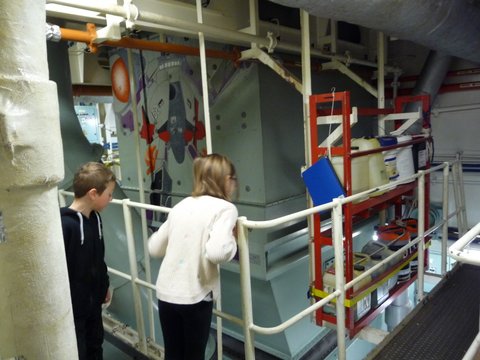 Children also very interested in the old, tattered and frayed flags from the first Warramunga framed in the Officers’ Mess.  This led to a serious conversation about pirates and had M seen any.  Well yes, he said, but they are not quite the same as Long John Silver and Treasure Island ilk.  Only trouble was, we then promptly went past an Officer’s Cabin with a Jolly Roger on the door and a sign: “Pirates Only – NO TRESPASSING, All Others will Walk the Plank”.
Next stop, M’s cabin and tiny, tiny workspace.  Strategically hanging on a hook was his LB.  Good lad, and I am pleased to say that it looked as if it was getting some use and seemed to be wearing well after 10 months.  M said one of jobs was being responsible for the mail when they were in Port, and as delivery was sporadic and erratic, the crew had looked forward with much anticipation to the arrival of the AHQ parcels.  (He had also received a quilt from Rosina.) 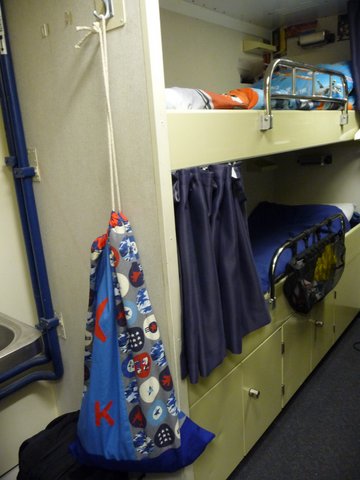 Up another ladder to the Bridge and the Captain’s chair.  Apparently, it is a requirement that one wears a cap when sitting in the Captain’s chair, so M very  generously presented each of the children with their very own Warramunga cap.  Our final stop was the forward deck, to check out the big gun and missile launchers.  M also pointed out a brass name plaque on the deck from the first Warramunga, there is one on each side, colour coded to denote port and starboard.
Many thanks to M and the Warramunga for a fabulous visit. We thoroughly enjoyed it and having our very own personal tour guide made it so much better.
How wonderful to be part of the AHQLB family!