Post Views: 12
This morning I had a conversation with one of the carers of one of the competitors on our Invictus Games Team.  She told me she had written a personal story in response to the quilt and bag she received at our presentation back in August.  She asked me to share the following post on our blog and Facebook page so that as many Aussie Hero Quilters as possible  would read it and know what receiving her quilt has meant to her.
So here it is….
Dear Jan-Maree Ball, Phil Winter, Team Management and my entire Invictus Games Family.
It has taken me such a long time to come to terms with what you and your “stitching band of angels” have done for me; as it is with Phil Winter, Team Management and my entire Invictus Games Family.
It is hard to put into words to give the full magnitude the effect being part of the Invictus Games Team has had on me mental, emotional and socially – it has been exponentially healing… from a tiny square that was sewn to the quilt made with love… love finally came back into my heart replacing all the pain.
For 25 years Stephen has been ill and he is only this year 50 that is half his life. He has struggled to do anything and quit trying taking me on the same downward spiral. No one understood, how could they so you loose all family and most friends. It was during Invictus Games 2018 selection process for him the change began. From April the first camp we attended I started to see the glimmer of the person from a quarter of a century ago. I could see I was being left behind, carers were invisible… I was broken in soul body and mind.
I realized long ago I no longer belonged to the civilian stream but I never experienced the Defence Force life it only had been a bad experience … that was the establishment. With each set of exposure to this unique group of ‘damaged’ people it felt like I found my home; my journey had not started but I felt it was about to begin. I was not asked questions, asked to explain or to justify anything. I was genuinely being accepted by total strangers.
I heard Phil Winter speak naming the team “Fit Friendly and Formidable”. A spark inside me happened; I once was all three… but the harshness of life had crushed me and life was pointless. From 2011 within 5 years my father, my sister and my 9 year old nephew had died; 3 summers of storms flooded out our house and we were trapped in the Inland Tsunami in the Lockyar Valley Toowoomba Qld while my father was dying. I then went on to battle cancer. All this while being social and mentally isolated; a carer with a TPI Veteran. Only last year while suffering all the mental issues that go with secondary PTSD and cancer I withdrew even further into total darkness. Only to have my mother telephone me to say she is cutting me down in her will because of my lack of contact. I no longer cared about anything let alone life itself.
Over these months of Invictus the spark became a fire and now that fire was lit. I wanted to become ‘me’ again. The words ring in my ear daily: I AM The Master of my fate I AM the captain of my Soul I AM Unconquered I AM Invictus and I AM Grateful to you all for allowing me to be part of your journey.
I know there WILL be bad days and there WILL be good days but I AM never going back to think of suicide as the answer. I AM only going up from here. On the bad days I will read the square on my quilt knowing someone thinks of me as An Aussie Hero I AM no longer invisible or alone. My journey has begun – Invictus is making me a person again not a role. I AM the Blessed one! I too AM INVICTUS.
Wendy- Leigh 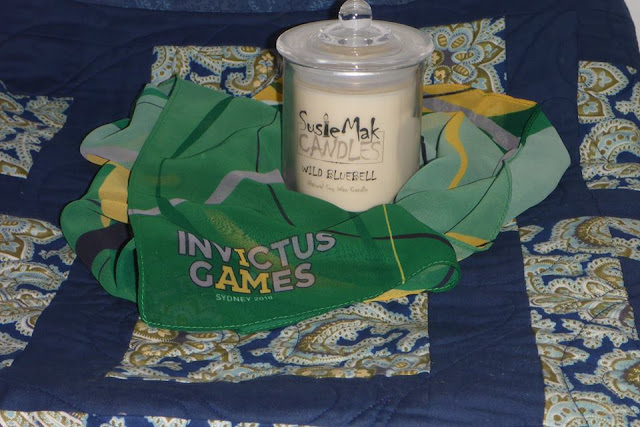