A trip to Canberra and more

I thought it was time I caught you up with a little of what I have been doing lately.  On Friday the 18th of April I headed down to Canberra.   If you have been around Aussie Heroes for a few years you would probably know that I used to go to Canberra fairly regularly, but COVID and Multiple Myeloma (MM) changed all that and I know I am not the only one who has had their lifestyle curtailed in the last two years.

This was 12 months since my last trip, almost to the day.   I used the time to catch up with some friends but also managed to squeeze in some Aussie Hero business as well. On the Saturday afternoon my husband and I headed out to catch up with Chaplain Mark and his wife Lisa.  Mark was the first chaplain I really worked with for Aussie Heroes.  He ended his career in full time service in January after reaching the position of Principal Air Chaplain, Director General Chaplaincy – Air Force.  He will be sorely missed but he has transferred to the Reserves so we might see him around a bit for a while, though he did tell me that he is quite enjoying his retirement so far.

It has been two years since I have seen Mark so we were well overdue for a catch up so he was not all that surprised, I guess, when I called him to see if he had any spare time on the Saturday. He did not know the sole purpose of my visit was to present him with his quilt.  We sat at the table and chatted about his retirement and caught up on our lives and Aussie Heroes in general. We discussed the fact that Aussie Heroes has created over 14000 quilts lately and I put the bag I had brought up on the table and said, “It is about to be fourteen thousand and one!”  Mark just laughed as he thought that I was about to bring out a quilt for him to present to someone on our behalf.  When I told him it was for him his face just lit up and then he could not wait to unfold it and have a good look at what was on it. It is wonderful for me when we can make a quilt for someone I know really well as it is so much easier to personalise it. This one was made by Lynn F and quilted by Philomena, with embroideries by Arthur, and they did a beautiful job.

I have seen so many people receive their quilts.  Mark has presented quilts on our behalf and has seen plenty of them presented.  Even so, I still don’t think there are many who have been more excited than Mark was to receive his. 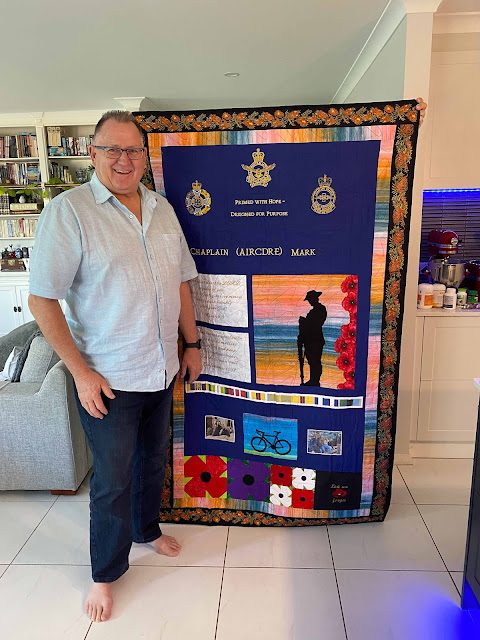 For lots of the things I did whilst I was in Canberra this time I did not take photos but it was a very special time. On the Sunday I met the family of one of our recipients.  Unfortunately she has received a quilt from us to give her comfort during her fight with the dreaded disease called Motor Neurone Disease. Sadly she passed away in recent months and the family asked to meet me to say thank you. Such a beautiful family. She must have been so proud of them. Those of you who come to our Thank You Weekend will have the opportunity to hear her husband talk about what that quilt meant to hear and her family.
On the Monday morning Clarissa joined me as we went to the Chief of Air Force’s home to attend a special morning tea. The RAAF Air and
Space Power Conference was on and that meant that Chiefs of Air Force from all over the world had come to Australia.  As often happens with these sorts of conferences many of the wives and partners come along and a Partners’ Program is arranged.  For this partners’ program Aussie Heroes was asked along to speak to the wives and partners to explain all about Aussie Heroes, what we do and how we do it. It was such a privilege to be invited to speak to the visitors and to show them some of our quilts and laundry bags. I took a selection along with me. We set up a table display in the garden and some stand alone quilts on frames inside the house. 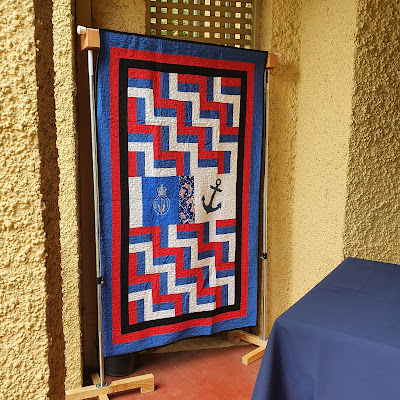 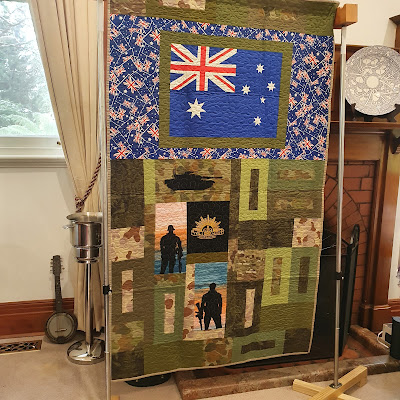 This very special ANZAC Themed quilt was made by Lynn Field, and it was won by Mrs Lou Hupfeld, the wife of our current Chief of Air Force, in an auction at one of our annual dinners. It hangs in the entry of their home, proudly on display for all to see. 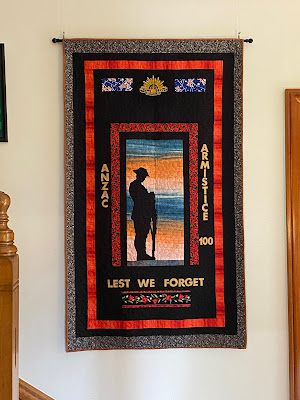 On the Monday night I met for dinner with the team that are putting in all the hard work to organise our 10th Anniversary Thank You Weekend.  So much work is going into the weekend and there are so many great things planned. I hope you have all bought your tickets and booked your hotels.  And don’t you worry if you don’t know anyone. That won’t last long. The whole weekend is structured so that by the time you get to the dinner on the Saturday night you will no longer feel alone as you will be sure to have made some new friends.
On the Tuesday I was supposed visit one group of people who need to remain nameless for now so as not to spoil any surprises.  COVID interfered with those plans but that gave me the chance to reach out to another friend of mine and I spent a few hours on Tuesday catching up with him. His name is Michael and he is ex-Army, a recipient of ours and also an amazing artist. He paints, sketches, sculpts and is also a talented photographer. Michael has an exhibition coming up and I am excited to say that the exhibition will be launched by none other than the Governor General at Government House.  I am so excited to see him get such wonderful recognition.  I am extra excited because in a couple of weeks I will be heading back to Canberra to attend the exhibition launch myself. How special. I am also really excited to share with you that Michael will be one of our guest speakers on the Friday Night at our Quilters Gathering.  I know in the past we have had professional quilters come along to speak but I think you will find Michael’s story fascinating and inspiring.
I have another trip to Canberra coming up on the 9th of April. This time I will be doing some more catch ups to do with the Thank You Weekend. I will also hopefully be presenting some quilts as well as doing some other Aussie Heroes business and of course, I will be attending the launch of Michael’s exhibition at Government House.
Now I thought I would show you our latest acquisition. After nearly 11 years of having to beg, borrow and scrounge quilt frames to display our quilts on at exhibitions and dinners, we finally have 12 of our own!   These ones were made by the Hills Mens Shed and they have done a fabulous job. You will see them in action at our dinner in October. They are easy to transport and easy to assemble and are just right for our quilts. Before I sign off for the night I wanted to share one more thing with you. I have had two phone calls in the last two days from recipients. The first was from a Vietnam Veteran and today’s was from the recipient of a Fallen Warrior Quilt.  They are not the first calls I have received and I am sure they will not be the last.  I genuinely wish I could share these phone calls with you like I am able to with a letter but it is not possible to remember everything that is said and pass it on and often these calls are emotional but rest assured that the sentiments expressed were heartfelt and the recipients were deeply grateful.
Till next time…. keep spreading the Aussie Hero word and happy stitching!
Jan-Maree xx

Last week I ventured to Canberra for a few days and one of the reasons I went down there was to speak to the...

END_OF_DOCUMENT_TOKEN_TO_BE_REPLACED

Subscribing to our weekly Monday newsletter

Hello, For AHQ Volunteers and those keen to start sewing to support Aussie Heroes. Do you receive our weekly Monday...

END_OF_DOCUMENT_TOKEN_TO_BE_REPLACED

It is that time…time to order some new name badges

After three years, the date for the dinner is finally getting closer.  Have you bought your tickets?  Have you decided...