Post Views: 2
Not too long ago Lisa had the privilege of meeting one of her recipients…..
Over to Lisa…
I recently had the privilege of meeting one of my recipients. I learnt that he had given up part of a day of his precious leave to meet up with me and that in a little over three days he was going to be back “in country”. I was able to present him with his Laundry Bag and hear first hand how much of a difference and a morale boost that the work we do is for the recipients. I was asked to pass on a BIG thank-you to everyone who contributes to Aussie Heroes.
I will admit that that is how I had thought of it, of “them”, it was something fun I did and gave to “someone”. A majority of the time I (we) will probably never know if the recipient receives or even likes the Quilt or Laundry Bag. If I (we) find out they received it, it is great,  if we get a thank-you it is a huge bonus.
I know each recipient is involved in something I can never grasp the full extent of, they have a job that very few of us would ever contemplate doing and they make sacrifices that would destroy most people. So time to write thank-you is often the last thing that is on their mind even though they may want to.
Sometimes when there is so much going on in your life expressing the simplest of things, like writing or saying thank-you, can be an emotional experience that can not be expressed. I think that anyone who contributes in any way to Aussie Heroes understands this and does not do it for the thank-you’s or recognition … it is simply a way of saying thank-you to the few who sacrifice the most so that we have the freedoms that we have today. This is what it means to me anyway … even more so now that I have been able to put a face, a real person, to the name.
I travelled from Woodend to Albury. A fairly direct route up the Hume Highway, through and past some lovely, if somewhat uniquely, named towns. Barnawatha, Howlong, Lilliput, Eldorado, Bowser to name a few. Lots of rest stops and service stations along the way as the Hume is a major trucking route. We even passed the Logic Centre to which Hubby asked if that was where Vulcans went to train when they were on Earth (Groan!). It is actually a logistics centre for the trucks. I travel with a comedian.
When we got to Wodonga my recipient invited us to come and visit the ADF museum. The address is – building 109 Carlisle Way, Gaza Ridge Barracks, North Bandiana. 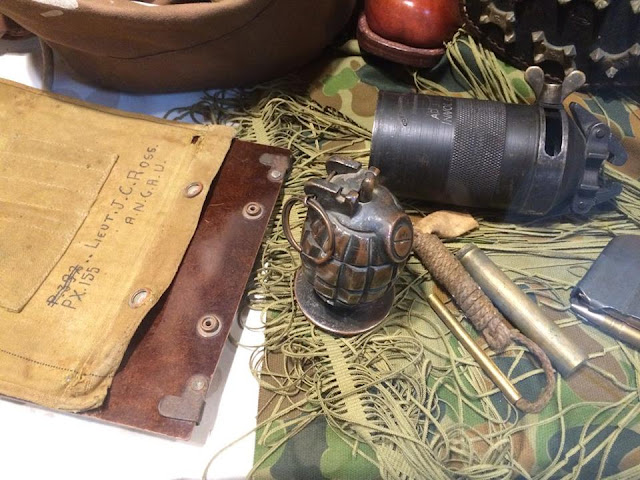 It was a very interesting place to visit and I would travel there again. The museum is on the grounds of an army barracks , it is open three days a week and you have to phone at least a day ahead to organise security to let you through the gate. There is an admission fee. At the time we went it was five dollars per adult or big kid, depends how you look at it.
The museum is staffed by ADF personnel and volunteers who are mostly ex-service personnel themselves. The people are an incredible source of information, from personal experience with some of the equipment in the museum to in-depth knowledge about the exhibits. There are artefacts and static displays dating from WWI.
A majority of the items are the genuine article and some of them are the only one of their kind in existence. It was truly an experience I will repeat in the near future. The museum are currently digitising their entirelibrary. It will be made available as an online library / resource.
There are comprehensive displays of a majority of the uniforms the ADF has issued over the years … from an original thick woollen uniform of WWI (imagine wearing that in the 48 degree heat of Egypt!), to the only surviving Nursing Sisters Uniform with lace cuffs and full length white apron (keep that clean, starched and pressed on the battlefield) and, of course the gorgeous, bottle green Women’s uniforms (blech!). 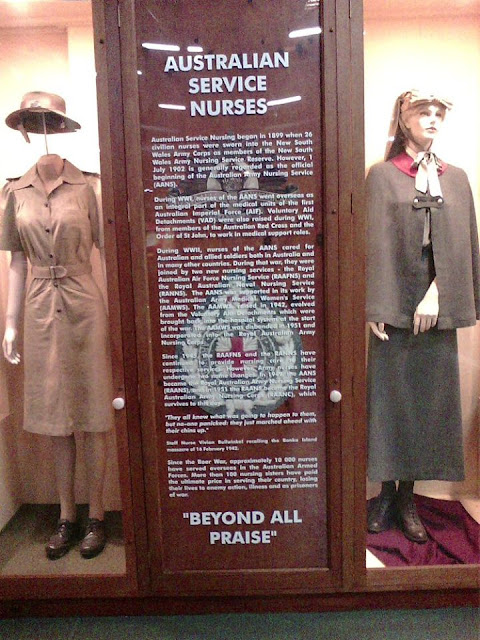 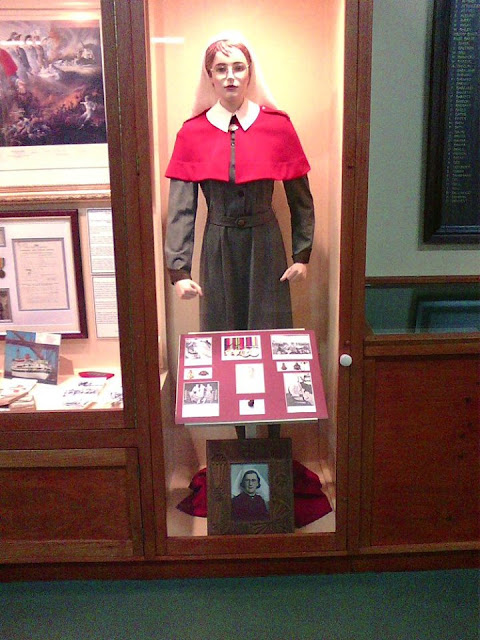 All of the Vehicles and other Equipment are operational, in that they can be moved or driven, not fired. There are some impressively sized cannon and artillery to see. I peered inside an APC (Armoured Personnel Carrier – three inch armour BTW) and was told by our guide that not only did a crew of four fit in there but you could also get seven guys in full kit 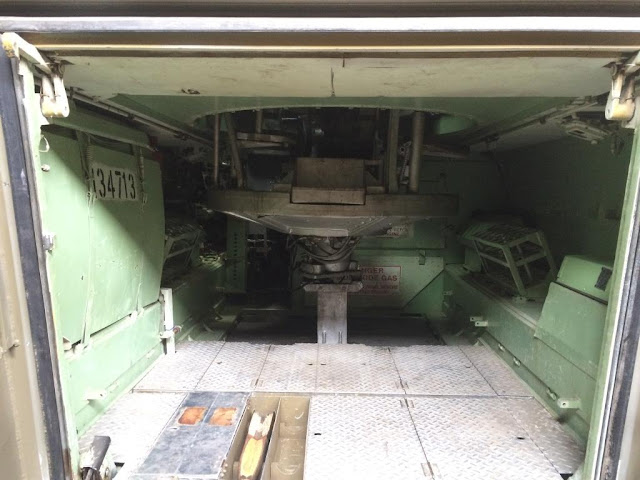 … he said the upside (and he knew from personal experience) was that when the APC went over a bump or was hit at least you didn’t get thrown around, packed in so tight you couldn’t move much anyway. Some of the displays uniforms, vehicles etc. have been used in movies and most recently in the telemovie Gallipoli. 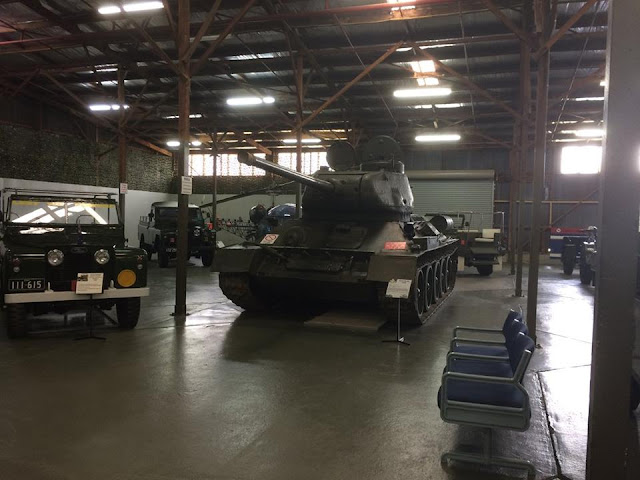 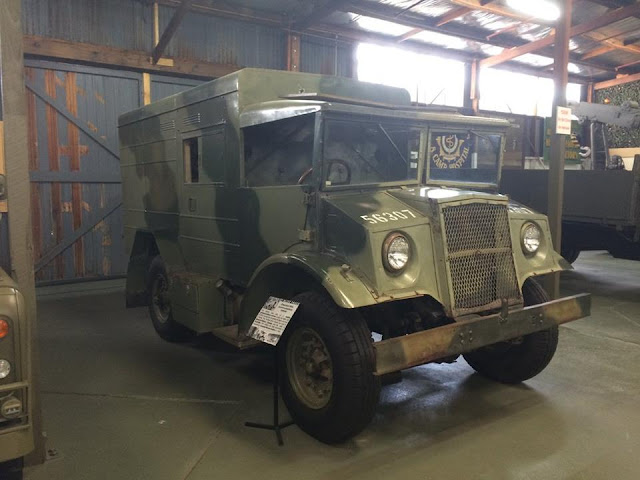 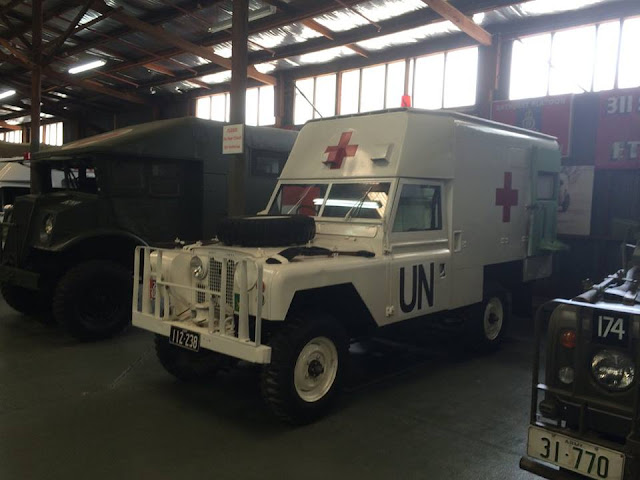 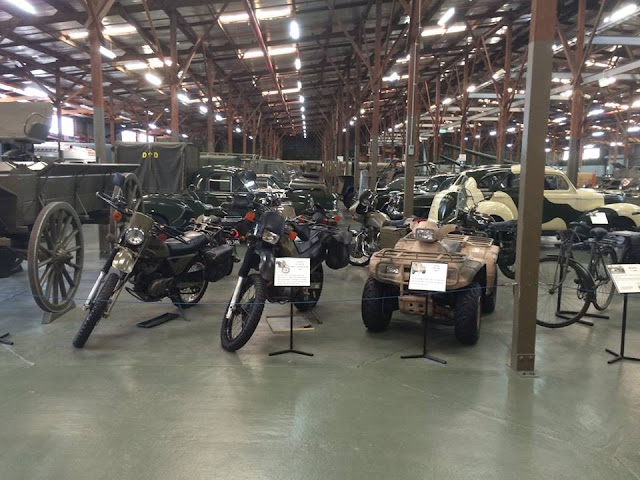 The base was home to the 2/23 Battalion “Albury’s Own”, 1940 – 46. They were mostly volunteers. During WW2 they took part in the Siege of Tobruk, 1st and 2nd Battle of El Alamein, Huon Peninsula campaign and he Borneo Campaign. The museum has on display one of the few surviving “Rats of Tobruk” medals.
It is a place that is really, truly worth a visit and is one fantastic resource for the type of things we, at Aussie Heroes, do. Consider my mind blown, it was a very humbling experience.

If you are interested in attending the museum, here are the details of how to gain access…
Welcome to The Bandiana
To book a time to visit us you will need to book 24 hours in advance.
Tuesdays, Thursdays and Saturdays between the hours of 10am to 3pm are the only days that we are open to the public for bookings.
Please call on 02 60552525 to make a booking.
ALL VISITORS OVER 18 MUST HAVE PHOTO ID or you won’t be allowed on base.
Once you have a booking date and time, please ensure you arrive on time, pull over outside the Barracks entrance gates and call Sharon on 02 60552525 and she will send an escort to meet you and bring you to the Museum.
We hope you enjoy your visit.
Till next time………………keep spreading the word and happy stitching!
Jan-Maree  xx