Post Views: 2
On Friday afternoon I was invited to return to HMAS Success for a very special event.  I want to share with you the invitation I received.  To me it is more proof of the value of what Aussie Heroes provides and how much our efforts are appreciated.
The invitation read..
Dear Jan-Maree
I am writing to invite you to attend the presentation of the Gloucester Cup and Spada Shield by the Governor General of Australia, His Excellency General the Honourable Sir Peter Cosgrove AK, MC, to HMAS Success.  The Gloucester Cup is awarded annually to the ship considered to have been foremost in general efficiency, cleanliness, seamanship and technical training, and the Spada Shield is a recognition of the surface combatant foremost in operations, safety, reliability, warfare and unit level training.
I feel that your contribution to the ship in organising to provide fantastic quilts and laundry bags has directly impacted on the sailors and officers onboard Success, and has helped them to achieve these two awards. I would be delighted by your presence at the ceremony as I believe that these achievements belong to you and others who have supported the crew of Success just as much as it belongs to those who sail in her.
The presentation will be held on Fleetbase East 1, adjacent to Success at 1500 on Friday 19 June.  Following this, an afternoon tea will be held onboard.  I would be honoured to have you join us for the presentation and reception.
Yours aye
Justin Jones
Captain, RAN
Commaning Officer
HMAS Success.
When I arrived on board a sailor approached me for my ID. They take your drivers licence and store it on a board near the gangway so that they know who is on board.  When he looked at mine, he smiled and said “Oh the Quilt Lady”.   Love that!
We were all situated on the Flight Deck over which an awning had been arranged to shelter us from the rain.  By two thirty we were all in place, the crew, the guard of honour, the band and assorted VIPs, family members and friends. 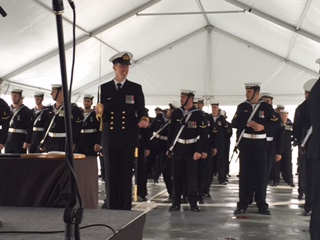 At three pm the Governor General arrived via launch.  We could not see that as we were seated but I bet it looked impressive.  Just before he arrived the skies opened up and the band had to shuffle forward so that the back row did not get drenched. It was a tad late for one unfortunate fellow but they did not miss a beat and carried on regardless.
After an inspection of the Honour Guard, the crew and the band by the Governor General, the Commander Australian Fleet (COMAUSFLT), Rear Admiral Stuart Mayer CSC & Bar, RAN presented the Spada Shield.  Next the Governor General of Australia, His Excellency General the Honourable Sir Peter Cosgrove AK, MC, presented the Gloucester Cup to the Captain.   Speeches, salutes and ceremonial duties over we adjourned to another area to have afternoon tea.
I was delighted to have a few minutes to get reacquainted with a Commander who I served with around 25 years ago (yes I feel old).  We were Lieutenants together at HMAS Cerberus and I do not think we had seen each other since them so it is wonderful to be back in contact.
I also caught up with one of our recipients from HMAS Darwin who is now the Aide to the Governor General.  Once again it was lovely to catch up.
The reception was not that long but I also managed to speak to the Executive Officer who received s a quilt from Ann W.  Guess what…. he LOVES it and was more than happy for me to take a photo for Ann.   He talked about the buzz that went around the ship as the quilts and laundry bags arrived in the mail each time. 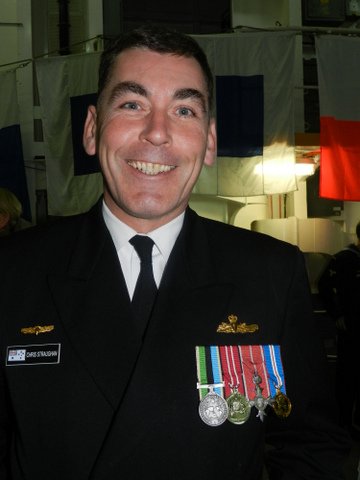 I am sorry I do not have more photos for you but if you look at the photo above I was seated in the front row, next to the Captain’s parents, just to the side of the rear of the stage. I would have only been able to get photos of the rear of the proceedings which would not have been much good. There was a photographer there and I know that the story was covered on Channel 9 but I have not been able to find it.  You read another account of the event here if you wish…
For me it was an honour to be invited to be there.  A big BZ to HMAS Success for both awards.
If you are curious about the two awards that were presented I thought you might like to read the info below.
The Spada Shield….
In late 2008, a new award was added to the Australian Naval traditions, being a trophy presented yearly in recognition of the ‘Foremost Surface Combatant.’
The award is named to honour the significance of the action by HMAS Sydney II off Cape Spada, the northwestern extremity of Crete. Fittingly, the new trophy was named The Spada Shield.
In July 1940, HMAS Sydney II, whilst engaged as the support vessel for Royal Navy ships hunting enemy submarines off the coast of Crete, sighted two enemy cruisers. A fierce naval battle took place off the Cape of Spada with the two enemy cruisers, the Bartolomeo Colleoni and the Giovanni Delle Bande Nere, both were destroyed. During the engagement, HMAS Sydney II was hit in the foremost funnel, where luckily only one minor casualty resulted.
The wooden shield for the new trophy was made in Australian kauri pine and the shield is adorned with Australian silver 925 quality and marked as such. The shield shows the image of the crossed navy ensigns at the top, shows an image of HMAS Sydney II, and of course depicts what the award is for. The focus of the shield was taken from a painting of HMAS Sydney II. A large disc of 1.2 mm thick sterling silver was spun up, shaped and polished. The artisan from WJ Sanders then commenced the hand chasing (repoussé) of the image onto the silver. This is an extremely time consuming and skilful art that is now very rare. It took at least 40 hours to transform the disc of silver into a beautiful image of HMAS Sydney II.
It is fitting that this shield honours the significance of the action by HMAS Sydney II off Cape Spada, especially as there was considerable public interest after the recent discovery of the ship’s final resting place off Western Australia. The inaugural 2008 winner of The Spada Shield was HMAS Parramatta
Source
Gloucester Cup….
The Duke of Gloucester’s Cup was instituted in 1946 when His Royal Highness the Duke of Gloucester presented a silver cup to the Royal Australian Navy as a prize for the ship which shot down the greatest number of sleeve targets, in proportion to the number of rounds fired, during a calendar year.
Such a competition proved to be impracticable and consequently the cup has traditionally been awarded as a prize for the RAN unit displaying the highest level of overall proficiency.
The first RAN major fleet unit to be awarded the prize was HMAS Hobart (I) in 1947. The first submarine to win the coveted award was HMAS Onslow in 1977 while in 2011, RAN Clearance Diving Team 4 wrested the cup from the fleet to become the first Clearance Diving Team to be awarded the prestigious award.
Several RAN units have won the cup multiple times, notably HMAS Hobart (II) which took the prize on eight separate occasions during her long commission. Others have won the award in successive years – HMA Ships Quadrant, Vampire (II), Sydney (III), Hobart (II) and Darwin.
On those occasions when a fleet unit wins the award a five pointed gold star is painted in a prominent position on the vessel concerned in recognition of the achievement. The star is removed only when the award is won by another RAN unit.
Source
Till next time…….. keep spreading the word and happy stitching!
Jan-Maree  xx