A quilt for Matthew- RIP

Post Views: 2
In October last year I posted a story about a special quilt we made for a soldier called Matthew Millhouse.  Matthew was one of a group of soldiers who were the first Australians to be injured on deployment in Bagdad nearly 11 years ago.  You can read the previous post here  but to recap, Matthew received a concussion but once he came home it was clear that not all was as it should be.  To cut a long story short, over a period of time it was determined that the brain injury that Matthew sustained had resulted in him being diagnosed with Early Onset Dementia.
We were asked to make a quilt for Matthew and given the tragic circumstances of his situation we made a special effort and made Matthew a memory quilt with photos of his family and friends on it with their names underneath.   The photos were sorted by Katrina and Jenny D and Gale C made the quilt. I was privileged to present it to Matthew at a special lunch held  in October last year.
I am so sad to have to share that Matthew Millhouse has lost his battle with dementia almost two years after his diagnosis. He went peacefully surrounded by family and is survived by his wife Terese and daughter, Eleanor. 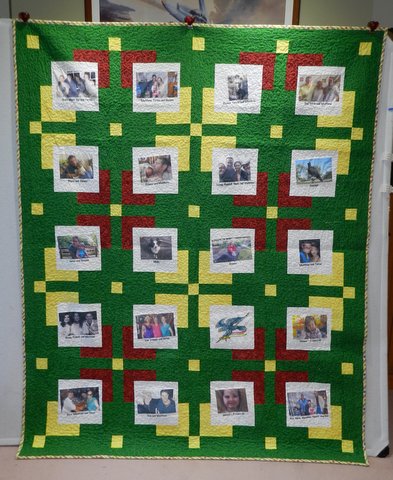 Rest in peace Matthew. You will not be forgotten.   Our thoughts are with the Millhouse family, their friends and Matthew’s brothers in arms.
Till next time……………………….
Jan-Maree xx