Post Views: 7
Yesterday 12 of us went to visit HMAS Canberra to deliver 400 laundry bags to the crew prior to their deployment.
We were invited to attend a Clear Lower Deck Parade.   That basically means that everyone who is not required on duty at the time is to come to the parade area and form up.
Instead of hearing from me though.. some of those who attended have been kind enough to write their thoughts to share with you….
Firstly Jenny N….
Huge Ship ,epic day . It is such a wonderful privilege to be the guests of yet another Navy event.
We boarded the enormous ship HMAS Canberra  at Garden Island  to a very warm welcome from all the sailors who were very gracious hosts during the day.
I just love ships , I love the smell of diesel and the incessant hum of all the machinery .
It was so clean ,I don’t know who mopped all the lino, probably some poor sailor on naughty duty! There were miles and miles of corridors. Just as well the lovely Cath was our leader I would have got lost!
I really liked the lino navy blue with white flecks .Now if that was a fabric I could incorporate that in a quilt……don’t delay they’re ascending a ladder or maybe the sailors call them steps.
We’re going to have lunch .How nice, a meal I don’t have to cook! Choices of a chicken wrap, or spag bol and more.  I had a patriotic barramundi which was really nice. I thought I had better not have too much food with all that climbing ladder exercise. I did ask about dessert but thought better of it.
Cath and Andy cleared the table.Thanks guys, I didn’t know where anything was supposed to go anyway! Thank you chefs ,it was excellent.
After lunch more steps up to a Senior Sailors Mess which was very nice, panelled  walls and green tonings. A nice place to relax ,if you had the time!  We all appreciate how busy and hectic your lives become when you’re deployed and we thank you for your service to our country.
Cath kindly showed us her quarters.  She shares with another Chief Petty Officer (CPO). It was really nice….a little desk then 2 bunks and even an ensuite which is a pretty rare occurrence.
Next more corridors more blue flecked lino and then onto deck which was bigger than a football field. You could play basketball one end and bring a helo in the other with us in the middle .Amazing!
We quickly set up all the bags, chairs were brought, thank you, and we were part of an awards ceremony. Thank you for including us in such a special event Navy friends. It was an honour.
After the formalities, everyone filed past to choose a bag.It was lovely to chat to some of the recipients as we rarely meet them. It always amazes me what everyone wants .Never what you think!
It was such a happy occasion and everyone from Aussie Heroes loves to support and hopefully make a difference to the lives of our deployed ADF men and women.
Thank you for sharing your day with us and thank you for your service to us all.
Jenny N
…..
And a few words from Andy… our ex-Navy recruit…
The visit to HMAS Canberra on Monday 20 Aug 18, to drop off their Laundry Bags, appeared to shock quite a few of the crew. They were all very appreciative of the gift of their laundry bags (Dohby Bags). One sailor even took time out to explain where the term Dohby Bag came from, something I wasn’t aware of despite serving in the Navy myself.
So the term Dohby is an Indian term for wash. And as India was under British Rule for many years, the Royal Navy adopted the term Dohby in reference to a sailors washing. So when the Royal Australian Navy was formed, this phrase was on of the many that automatically transferred across.
Lunch first….with out hostess with the mostess –
our lovely fellow quilter Chief Petty Officer Cath 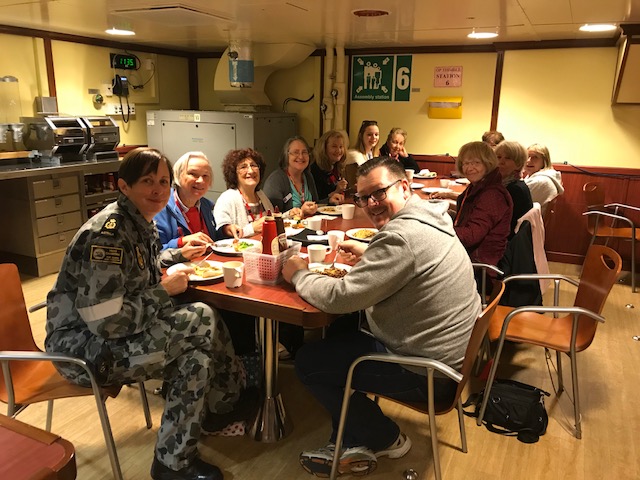 Just about ready to go… 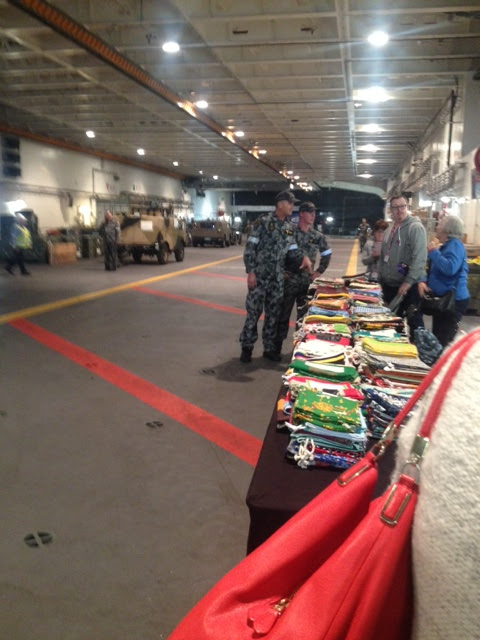 The Chief checking that all is good to go…. 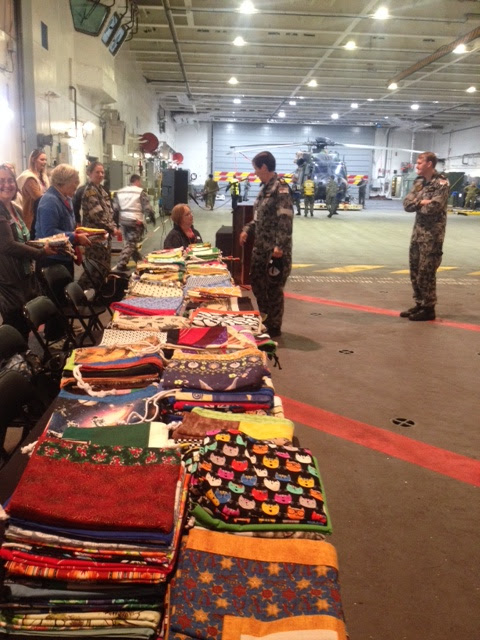 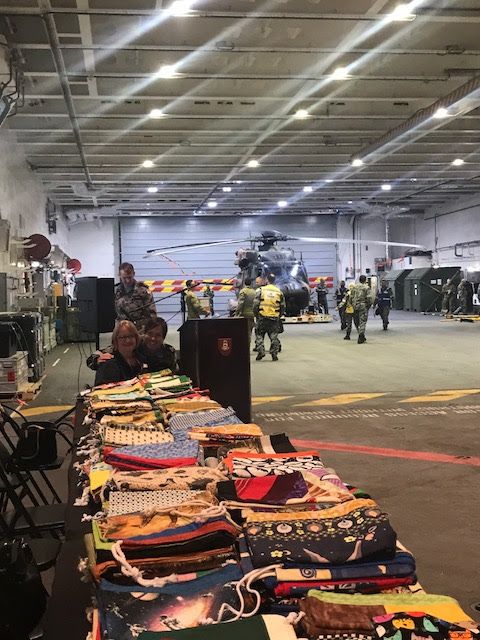 Ready to hand them out…. 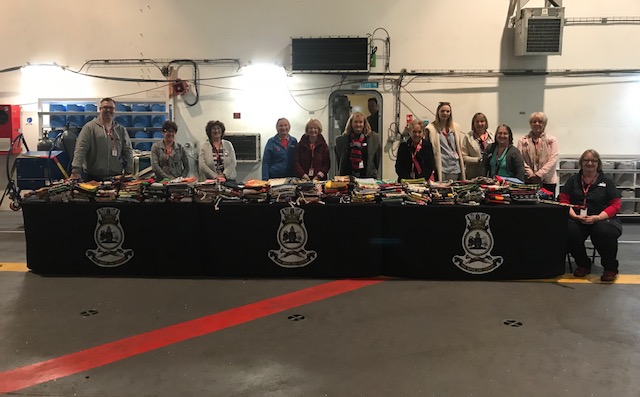 And then they started coming… no time for too many photos.. everyone was too busy… 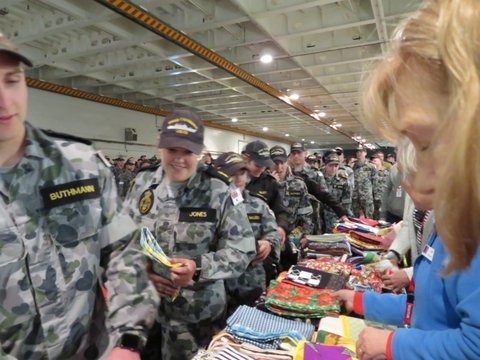 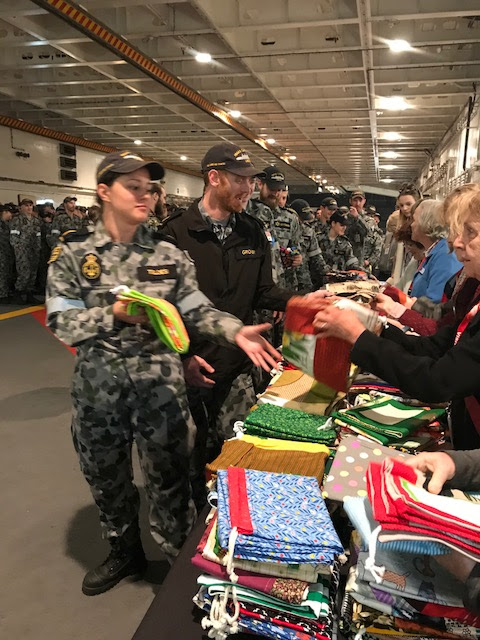 I had met this fellow before at Avalon RSL.. so lovely to see him again and have him come and say hello 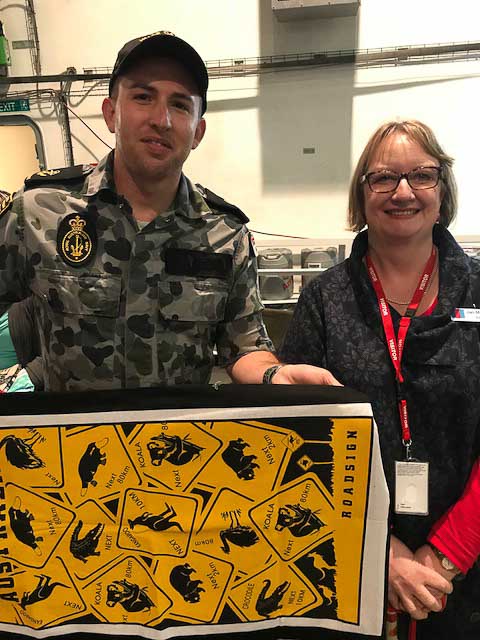 Cath ear-marked this awesome bag for her room-mate… 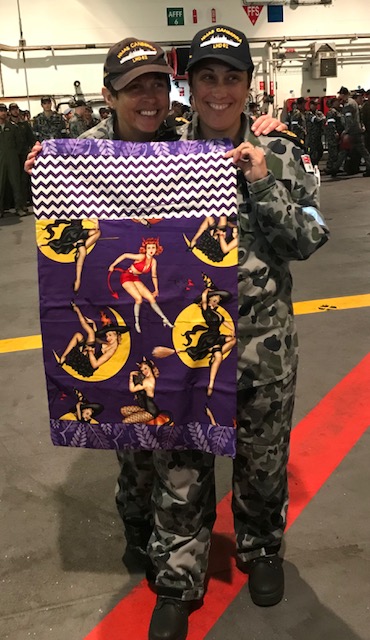 Gail made this fellow’s laundry bag especially after meeting him when she joined the ship for the family cruise. 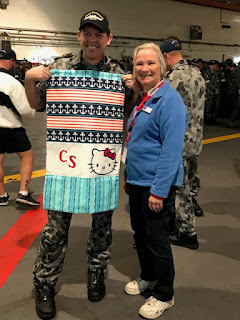 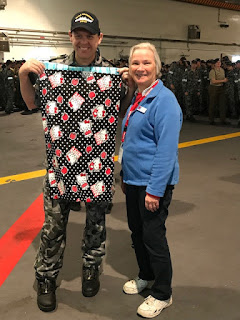 I had to have a photo with this fellow… an Air Force Air Traffic Controller (remember that is what I used to be a lifetime ago) and my husband and he are friends. This little lady sent a photo to her mum who forwarded it to her friend, Robyn Wh, who is one of our quilters…. 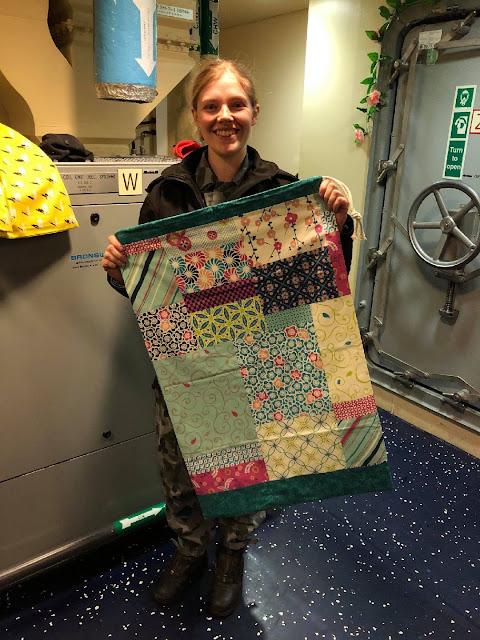 Rachel, in the maroon jacket, was delighted to catch up with her niece who is posted to HMAS Canberra 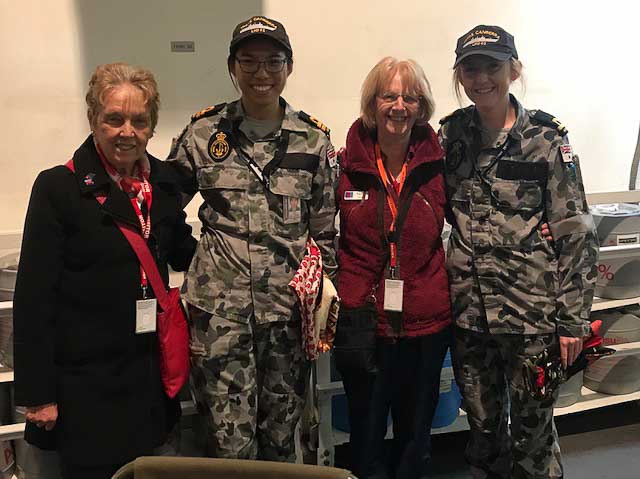 Jenny was delighted to meet one of the recipients who received one of her laundry bags. 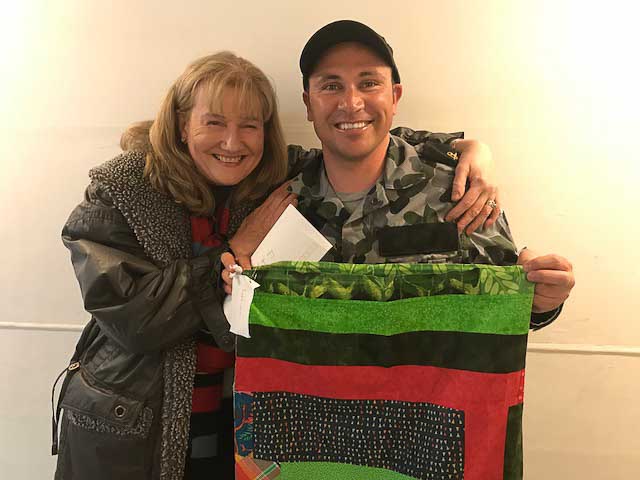 Bec brought her laundry bag up to show me, she had made it before she knew about Aussie Heroes and she is now planning to sew for us when she is not at sea….   She has made some beautiful quilts so I am looking forward to her joining us… 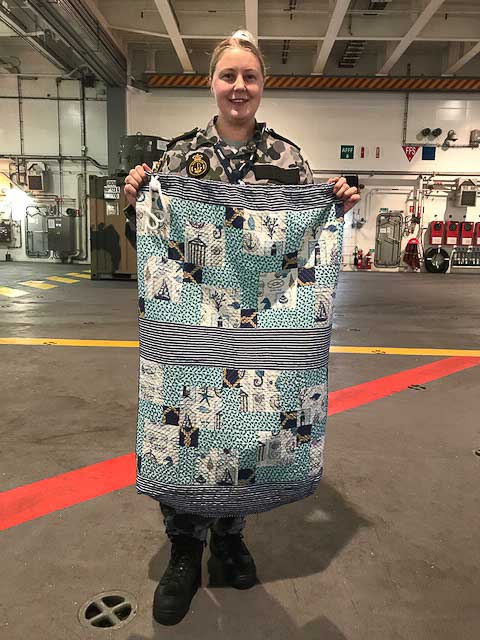 And this fellow… on the 7th of Dec 2012 I posted his quilt to him… he was on HMAS ANZAC, the first ship we looked after and he was the chaplain.  The ship returned home on January 26th and still he had not received his quilt or bag. Eventually he received them seven months later after they had toured the country. It only took just over 6 years for me to finally meet him 🙂 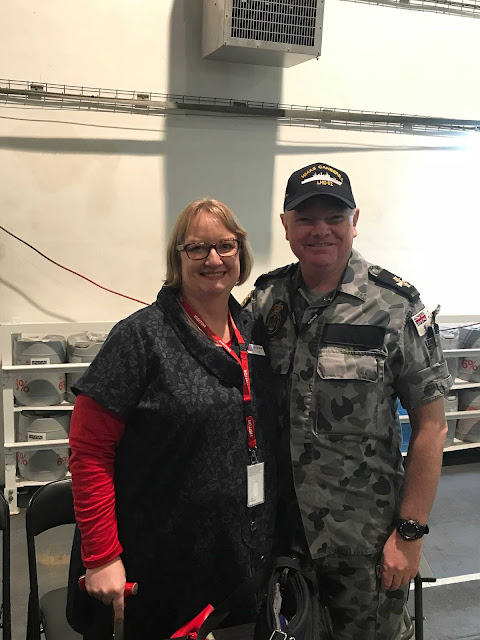 And this fellow … Last year I sent a laundry bag to a gorgeous young lady. later she wrote to me and friended me on Facebook.  This is her fiance and I recognised him as we were leaving the Pass Office at the entrance to Garden Island.   I stopped him and said a quick hello but that was literally all we had time for.   I was delighted to see that he was actually on board HMAS Canberra and received one of the bags as well.   It is always lovely to meet someone in person … it was a nice surprise. 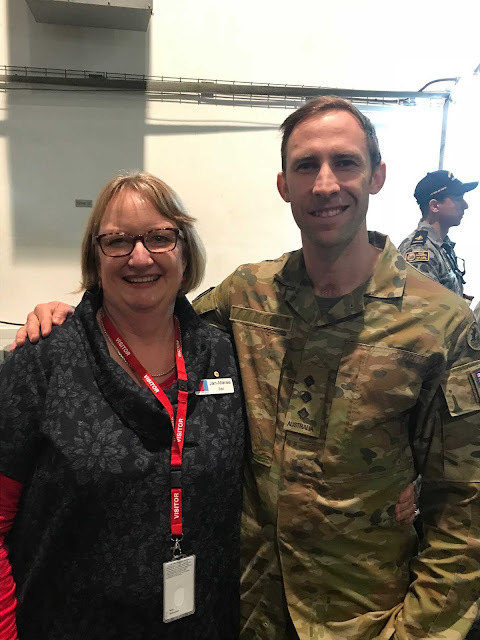 A panoramic picture of the whole crew and their laundry bags.

Till next time …… keep spreading the word and happy stitching.
Jan-Maree xx