Post Views: 3
This is an extra post but I wanted to share it with you all sooner rather than later so I did not think you would mind.  This morning I was invited to morning tea at 2 Commando Regiment.  Katrina and Garry (our Wounded Warrior) were presenting the Regiment with a recumbent bike that Garry rode in the Invictus and I was invited to come along.
I was delighted to receive the invitation and was greeted very warmly when introduced to the fellows that were there.  It was very obvious before we spoke much that they appreciate what we do for all service personnel and especially for them.
The Commanding Officer joined us and we all sat and chatted for a while.  He was very interested in Aussie Heroes and has memories of our first year when he was the Commanding Officer of the Special Operation Task Group in Tarin Kot.  I reminded him that he wrote us a letter of thanks during that time which he remembered.
He then surprised me by presenting me with the following plaque which reads
“Aussie Hero Quilts
presented to Jan-Maree
in appreciation for your on-going service to 2CDO Regt” 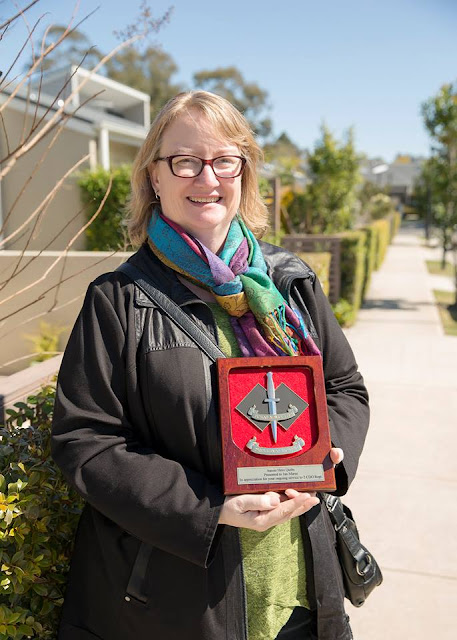 He also said that Aussie Heroes is part of the wider 2CDO Regimental family and spoke at length about how much what we do is appreciated.   He said it is the little things that count and like their medals the meaning of the quilts will endure as times passes and stories are told of each member’s service. 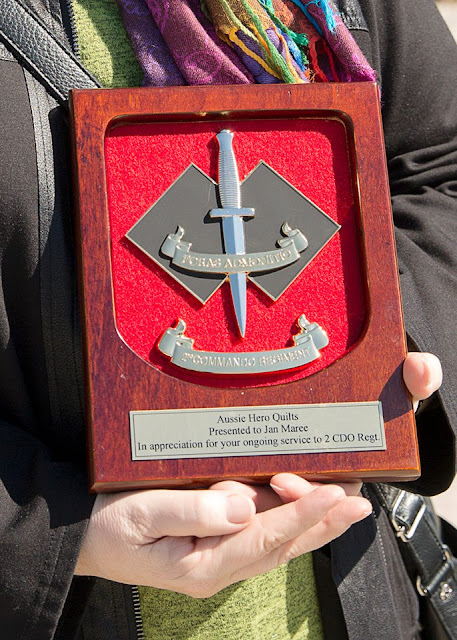 Katrina had used all the photos I have of the quilts and laundry bags we made for the commandos over the years and had put them in to a photo book to give to the CO.  You will be pleased to know that the book now resides in a display cabinet in the regiment.  The fellows had a good look at the book, passing it around and going through the pictures.  It was a real trip down memory lane for me to look through the book. So many of you have a quilt or a laundry bag in there.
Big thanks to Katrina for the photos above and for arranging the book. She did a great job and her photos are always much better than my amateur efforts. 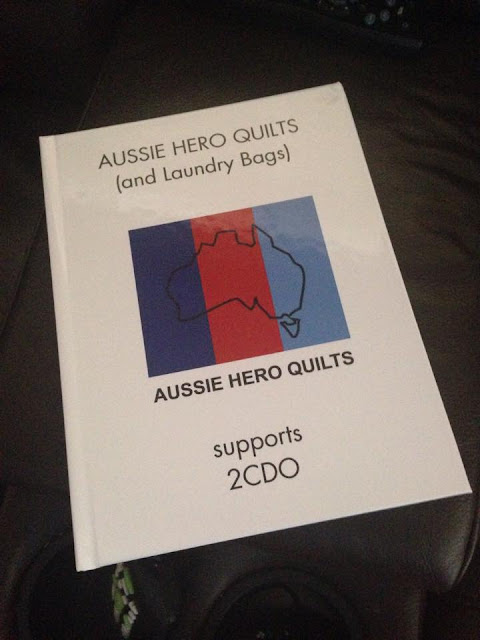 To me this is another example of how much what we do means to the troops.   I know you are always hearing it from me and I know we don’t hear back from a lot of our recipients but gestures like this are not to be taken lightly.  This speaks volumes about the way we are valued.
It may be my name on the plaque but Aussie Heroes would be nothing without ALL of you – those of you that make quilts, or part thereof, laundry bags, blocks of the month, embroideries, those who help with admin and packing boxes and the like.   No contribution is too small and all are valued.
Till next time……………keep spreading the word and happy stitching.
Jan-Maree xx